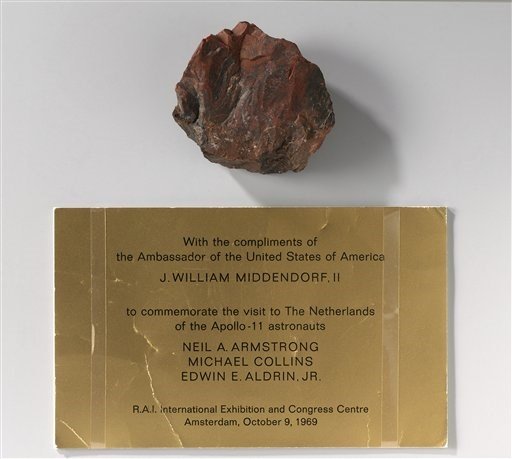 THERE are no forests on the moon. Not even trees are a thing. You’d think everybody would agree—but no. So far, only the Dutch Government has come to this conclusion. There may be others, but it is the Dutch who had their very own moon rock tested. The results are in, and wouldn’t you know it? Contradictions. It’s bark. Apollo astronauts gave petrified wood to the Dutch Prime Minister and said it was a moon rock. So lame.

The gift was delivered as part of the Nixon administrations global tour, in which Apollo 11 astronauts Neil Armstrong, Michael Collins, and Buzz went about everywhere ringing doorbells to deliver the “moon rocks” they’d journeyed hundreds of thousands of miles for. Proof of the moon landing, I guess. In Holland, the boys down at The Lab decided to have theirs tested, but you know that part already. It’s a paper weight. Frank Beunk, a geologist involved with its investigation, sums up how every one of us feels right now when he said: “It’s a nondescript, pretty-much worthless stone.” That’s very touching, Frank. Like poetry. Thank you.

Of the combined 270 Apollo 11 moon rocks and Apollo 17 “Goodwill” moon rocks that were gifted to the nations of the world, approximately 180 are currently unaccounted for. Many of those, we are assured, were “accidentally” disposed of along the way. Sure, let’s go with that. So many unfortunate mix-ups with landfills. Looks like others had the same idea. Do the responsible thing and get them tested. The only difference being that the Dutch were indiscriminate in their words, while everyone else is in the know. Of those remaining, many to most have been locked away in storage for decades, cleverly removed from the public eye. And it should come as little to no surprise to learn that the missing moon rocks which happen to “turn up” on the black market, they’re proven fakes every time.

The selling of “fake” moon rocks became such a recognized problem in the years following the Apollo moon missions that—at the turn of the last century—the United States Corporate Government created a special undercover task force in hopes of apprehending them before they became a public issue. You really wouldn’t think moon dust getting into the wrong hands on the garage sale market would be a matter of national security, but who am I to judge? These sting operations, known as Operation Lunar Eclipse, were first headed up by Senior Special Agent Joseph Gutheinz of NASA’s Office of Inspector General (NASA OIG), posing as Tony Coriasso, and Inspector Bob Cregger of the United States Postal Inspection Service, posing as John Marta. Mm-hmm, even the postal service is in on it. Agents from the United States Customs Service would later get involved, and rather than demanding that the media narrative be upheld, one which claims the highest levels of the U.S. Government simply and truly cares about the poor elderly space enthusiasts who are being swindled by con-artists, let us consider the next point. 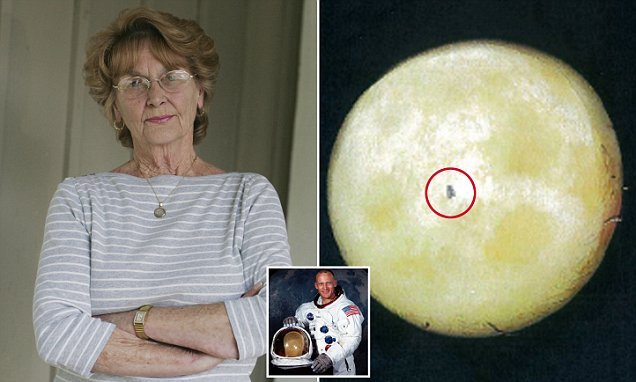 Federal prosecution would ultimately expand to include the criminalization of selling any “moon rock,” whether provably gifted by NASA or otherwise found to be fictitious. Such was the case with Joann Davis, a 75 year-old California woman who was in 2011 interrogated for hours by six armed federal agents in front of a Denny’s restaurant, pants soaked in urine, simply for attempting to sell a legally obtained moon rock the size of a grain of rice. Intended, she said, to pay for her son’s medical care. Most notably, the pebble was gifted to her late husband by Neil Armstrong, and as such, you’d think she had the perfect right to barter it off for nickels in a garage sale—but no. NASA considers the moon and anything retrieved from the moon to be God-vernment property.

How do you even go about mixing up the Holland moon rock for a forgery? A random tree found its way into Michael Collins carry-on luggage on the way from the tarmac, apparently. And mind you, not just any chunk of pavement from the side of the highway either. As part of their investigation, the Dutch preformed a thorough background check, and finding no such petrified tree having ever existed in Europe, Asia, or the America’s, determined its origins to have stemmed from the furthest corners of our Earth.

And now you know what NASA was doing in Antarctica.