12 Flat Earth Observations from 30,000 Feet Up In a Commercial Airliner

WELL OVER a hundred flights have been logged onto my time card sheet—both continental and international. But that is hearsay, because flying has always made me somewhat uncomfortable. It’s not like I’m afraid of dying or anything, because really, I’m good to go when Yah is ready. Rather, I’d sit by my window gazing down at the incredible world spread out below and praise Yahuah for his creation. In the back of my mind there was always something nagging at me, as though what I was observing was in no way what had been advertised by and those boys down at the Federal Reserve. Perhaps it has something to do with the first moment as a child when I was handed my first globe.

Reality is filled with contradictions. Which is to say, I’ve created a backlog to my subconscious. But once I began investigating flat earth claims, these considerations quickly resurfaced, each sparking with brilliant animation. Now, the topic of Flat Earth is a massive subject, just as Globe Earth is. I can’t hold your hand either, where research and conviction is concerned. Every citizen needs to take to task and challenge our multi-billion tax dollar government agencies like NASA themselves. So while these points can’t even begin to address the entire spectrum, I want to present my reader with what I believe to be twelve beginner proofs that the earth is not round, as the monopolizing governments of our world claim, but stationary and flat, as observed from 33,000 feet up in a passenger airplane.

1 The horizon always appears perfectly flat. In fact, all amateur footage, and as elevated as 20 miles or higher (as high as anyone can go), whether it be a plane, drone, rocket, or balloon, all show a flat horizon. Only multi-billion tax dollar government agencies like NASA unveil the supposed curvature. If you don’t believe me, take a picture of the horizon on your next commercial flight or to your next ascent upon  Mount Everest, load that photo onto your computer screen, and hold a ruler to it. Also, Photoshop does a wonderfully proficient job of auto-correcting the fish-eyed lenses that NASA abuses.

2 The horizon always rises to eye level, no matter the elevation gained. Whether I’m 6 feet off the ground in a long hall, open prairie, edge of the ocean, or as high as 33,000 feet above majestic mountain ranges, the horizon just keeps rising and rising. If the earth were a curving globe, I’d have to tilt my camera downwards to see it. Another words, proposed calculations should dictate that the earth shrink below my feet, but it doesn’t. When globe believers make fun of flat-earthers, they like to bring up an “edge of the earth” scenario, when in fact they should have one everywhere they go, but they don’t.

3 An airplane would continually have to dip its nose so as not to climb altitude as it flies over the curve. I’ve looked up these estimates. A commercial airplane would climb to 80,000 feet in just half an hour. I don’t think most Globe Earthers have any clue how fast the world is supposed to curve by calculations. By the way, the same implies for submarines. Neither pilots nor submarine commanders claim they do any such thing. Flat Earthers have interviewed enough pilots to receive the same response. Pilots are indoctrinated with the belief that their high-tech equipment continually adjusts their elevation with the curve, when the very makers of that equipment have no such knowledge of the proposed-technology. Ironically everyone navigates this earth of ours as though it were flat, despite contrary beliefs.

4 The ground is stationary. Whether 30,000 or 34,000 feet up, or however high I’ve climbed in my hundreds of flights, I’ve never once observed the earth sliding in any direction.

5 If the earth is truly spinning eastwards at 1000 miles an hour, we wouldn’t need an airplane to get us there. A hot air balloon should suffice, simply hovering from New York to Los Angeles in as little as three hours.

7 If the earth is really spinning at 1000 miles per hour, landing a plane would be next to impossible. Why do globe-believers say a sniper has to position his shot with the spin of the earth in his calculations but a pilot does no such thing? A pilot can line up his runway directly ahead of him from miles away and land perfectly every time.

8 Ball-Earthers believe in sideways gravity, which magically drags the entire lower atmosphere in perfect synchronization with the ground below our feet. That is why, they say, a helicopter can hover over the same spot for an entire hour without floating from Orlando to Houston. It doesn’t matter if we’re outside or trapped inside between four walls and a roof, it simply picks us up and perfectly carries us and everything in it and on the world around us with no further effect or fanfare. There is apparently no consequence to the brush of force between that and the non-spinning, non-gravitized, non-atmosphere of an infinite vacuum in space. This tooth-fairy theory has never been successfully tested or proven outside of the fantastical imagination that aligns itself with a spinning globe, and is quite easily debunked by rain, fireworks, birds, bees and other insects, clouds, smoke, planes, and any other number of aviation objects or projectiles that can be observed with the naked eye, which would behave quite contrarily to the proposed stationary earth to atmosphere theory on a spinning globe. The whole of ball-earth hinges on this one  theory.

9 Projectiles launch just as far in all directions, north-east-south-west, and with as much precision and accuracy.

10 Globe Earthers believe that everything about our perspective is relative. The very notion that planes are flying upside down or at any other constant variable of angles like ninety-degrees as it constantly realigns itself with the curve of the globe is a complete absurdity.  The idea that a man digging a hole straight down could eventually reach sky on the other side is ludicrous, let alone digging a hole at an angle and having his direction of gravity changed accordingly. Common sense tells every free-thinking person correctly that there truly is an up and down in nature. Nature is not relative, as Einstein proposed.

11 Gravity is a force strong enough to hold the world’s oceans at bay and apparently keeps people from falling upside down into the vacuum of space, yet it has no effect on birds, bugs, the massive amounts of water in our atmosphere, let alone a plane.

12 If the Earth has a curve to it, then we should see far away objects like tall buildings and mountains bending away from us, as the curve of the earth would dictate, but despite seeing tall objects with the naked eye many miles beyond what curvature calculations allow for, such a thing has never been observed, and never will. 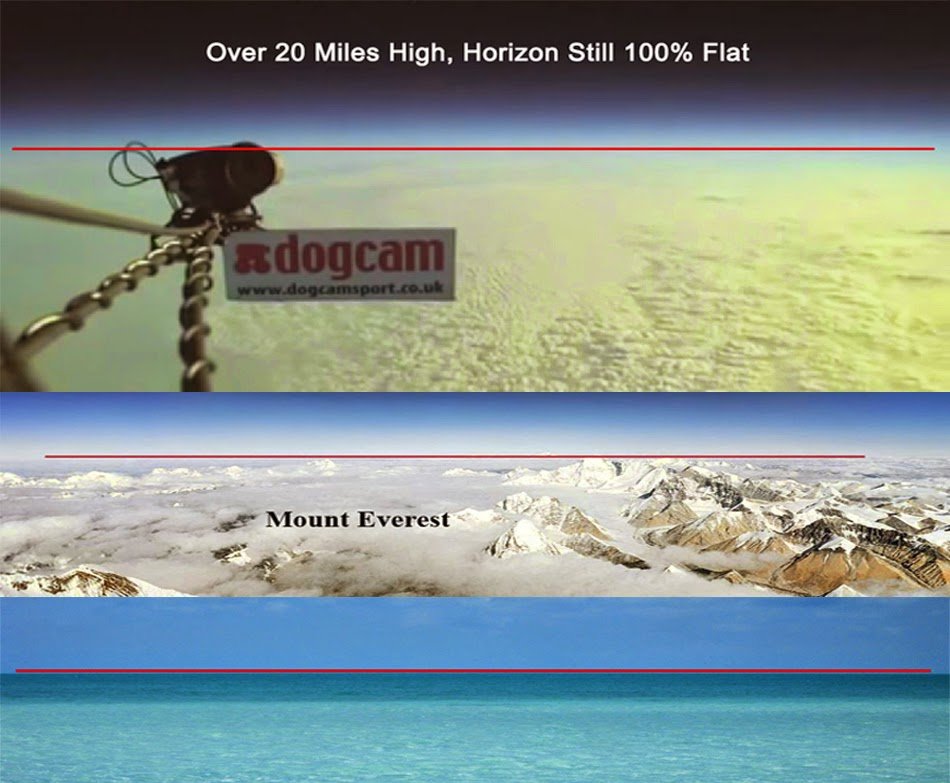