There’s an ongoing debate regarding whether or not Scripture prophesies an end-times antichrist. Now, if we’re going merely by “canon,” I suppose an argument can be made either way. Yea or nay. I can see both sides. Feel free to post your reasons. I think everyone can at least agree that the spirit of antichrist (1 John 4:2-3) has already been at work since the generation of the apostles. Lawlessness. So, there’s that.

Perhaps the antichrist is absent from eschatology. Again, I don’t know. But that is not to say that the Illuminati does not have a messiah in their deck of cards. Make no mistake about it, the kabbalist of Zionism will indeed play their hand. And if we can understand what performance witchcraft is (a Book of the Dead specialty), specifically the continual psycho-dramatic exercises intended to social engineer us into MK-Ultra zombies, and the state which we currently find ourselves in (where-as the entire world is employed as their stage), then I believe we can understand why the Occult wants their messiah, and what his intended purpose will be.

The term chakra essentially refers to the various focal points in the body used in a variety of ancient and esoteric meditation practices, all of which collectively stem from Hinduism and Buddhism. “Tantra” is the practice, technique, and application of chakra. According to the science of tantra, the human being is his own miniature universe. All that exists within the created cosmology exists also within himself.

Have you noticed how astrophysicists beckon us to “marvel at the remarkable symmetry and wonder” of our universe when observing the clusters of galaxies and invisible dark matter, which somehow incredibly match the neurons in a mouse’s brain? Even NASA’s Spritzer space telescope recently informed us of a stellar system made up of two intertwined chains just like a coiling double-helix in a DNA molecule (cough, serpent seed), and stretching 80 light-years in length. We are expected to believe a black hole resembles the cell nucleus. Physicists will likewise remind us that a cell is made up of molecules, and molecules made up of atoms, and atoms composed of a nucleus and electrons, which in turn revolve around the nucleus. Likewise, planets are electrons and the sun the nucleus, the atom being our solar system, with the galaxy being a molecule, and the entire universe a cell.

See what I mean?

The walk-in closet for the esoteric almost always happens at the macro and the micro level, cleverly tucked beyond the horizon of our own eyesight. That’s where the lie happens. Creationist ministries keep trying to wiggle their way of the fact that big bang cosmology IS God. And it all goes back to the womb of Nut and the Mysteries of Isis.

But getting back to tantra. This cosmology within the self is a manifestation of pure consciousness, and yet, consciousness seems to be divided into two aspect—shiva and shakti. The first, shiva, represents the unchanging manifestations of reality, while shakti, being the subtler unseen realm of the psyche, has the potential to bring forth the entire manifest cosmos.

The tantric problem however is that the unconscious does not speak our present Babel language. It speaks in symbols. Therefore, it is through altered states of consciousness that the unconscious becomes vulnerable to reprogramming. In order for this to happen, the conscious mind must be put to bed in its altered state long enough for the symbol to be transformed. On this point, sex magic is applicable. Sexual energy, specifically arousal and the orgasm, when paired with visualization of the desired result, is a potent force which can transcend one’s normally perceived reality. 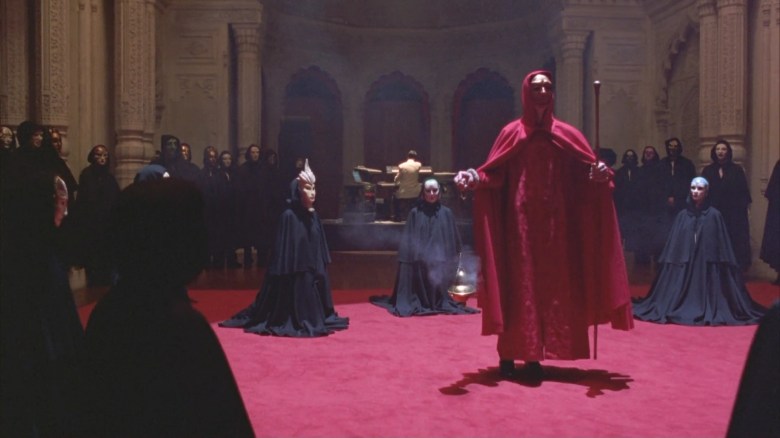 Lord of the wheel in Stanley Kubrick’s Eyes Wide Shut.

I know this is a lot to take in. However, if you can begin to wrap your head around what’s going down on the worldwide stage, then this is where and why I believe the antichrist is a thing to be desired. They need their master of ceremonies, or lord of the wheel, also known as the chakreshwara, in order for the spell to be cast. He is essentially the one who has mastered all the dimensions of energy within his own cosmology. He therefore cleanses the utensils before the meal, if you will, and officiates the ceremony so as to create the division between spirit and nature, ego and non-ego.

If you can visualize lesser wizards (of the Bill Gates, Pope Francis, or Donald Trump variety) surrounding the master chakreshwara, so as to form his wheel while the ceremony unfolds, then you should have a better time comprehending how he will administer his spell. He will grant power to kings without a kingdom for an hour, in order that the greatest delusion in human history can finally unfold. Expect sex magic.

Aleister Crowley and Jack Parsons, founder of Jet Propulsion Laboratory, famously performed sex magic rituals in order to conjure spirits. According to the Occult, spiritual fluid runs through the blood, but it is even more potent in the semen of men and vaginal fluid of women. It is therefore the lord of the wheel who will help to ignite the Kundalini—the coiled, serpentine, female energy sleeping in the sexual region of one’s body, most often bogged down in the lower three chakras (therefore keeping each practitioner dis-empowered and unaware).

But getting back to the antichrist in Scriptural terms, because recently, the TORAH haters are showing up going:

Irrefutable PROOF that we’re NOT to obey the Law is the FACT that the Pope’s into Sabbath now!

And I heard him say it!

The antichrist is going to bring us back under the YOKE of the Law! Noahide is coming!

Oh, man. My head hurts. I guess we need to go back to square one, to the very first chapter of the gospel of John.

A little later on Yahusha states: “I am the Way, the Truth and the Life. No man cometh unto the Father but by me (John 14:6).”

When John spoke of the WORD, he wasn’t directing our attention to Homer. If you can’t understand the difference between THAT and the Zionist messiah becoming TALMUD & KABBALAH made flesh, hence the antichrist, then as a “Truther” attempting to expose the deceptions and total control Zionism has over the world, I can’t help but conclude that you’ve completely failed the course.

I’m no prophet. I’m just a guy researching these things. But I get the feeling that the antichrist will have the power to make Christ consciousness a sort-of universal healthcare.