The Copernican Revolution Was a Hoax (Also, Marie Antoinette’s Love of Pinecones Discussed)

MARIE ANTOINETTE had a thing for pinecones. I can’t blame her. Some girls like shoes. Others unicorns. I actually know very little about Marie Antoinette. But that’s probably because I’m a guy. And also, because there’s nothing quite like a finely preserved vase from Classical Greek times. At the Louvre in Paris, women are as magnetized to Marie’s furniture collection as they would to a broom once held by Snow White or Cinderella at a Disney theme park.

Before we start hurdling accusations about her pinecone hangups, realize that she married into a household of ego-maniacs. Marie liked pinecones. Name a Louis. Any king Louis. They were all obsessed with them. They probably gazed at them while fluffing their wigs, as if admiring their own reflection in the mirror. Though Marie married the sixteenth Louis, two numbers away from the big time, Louis XIV considered himself to be god, quite literally. I’ll give Marie the benefit of the doubt. She probably had to make the best of an awkward situation. Her husband loved pinecones more than he loved her, so why not embroider them on her chair? I don’t know. I’m just a guy with some esoteric knowledge. Ladies, you tell me. 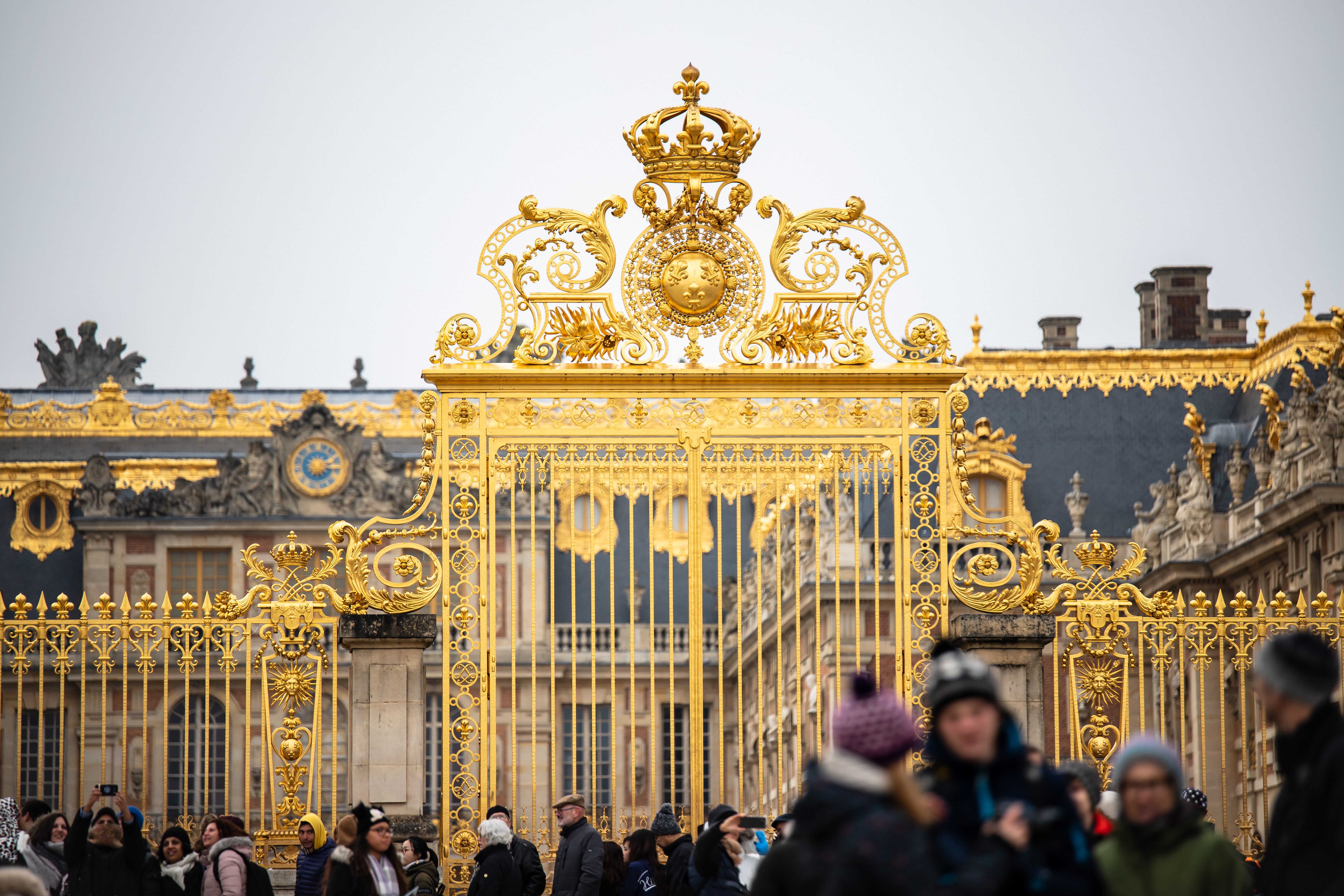 The Palace at Versailles is where Marie Antoinette and Louis XVI played house. To this day it remains the very symbol of the monarchy system. Important to the narrative is the fact that the palace is embroidered in gold. And suns. Gold. So much gold. Golden suns. Everywhere one looks, the esoteric symbols are so painfully obvious that even a singing nun from the Austrian Alps could figure it out. The place was literally converted from a humble hunting lodge by the sun king. And seriously, if somebody’s armpit could perspire with occult activity, then Louis XIV needed an endless supply of deodorant and cologne just to stay fragrant and dry.

In the Mystery religions, the sun was a symbol for the immortal soul doctrine. This is what Plato brought out into the open; the Hellenized church then adopted as doctrine, and which everyone gets so angry at me for pointing out. How dare you accuse me of being a mere mortal, Noel! There’s more to it than that, and it involves Tammuz. But he’s just a formality. What’s important for the neophyte is learning to identify the inner-divine—replacing the clothing of the mortal for that of an immortal. That’s all a sun cult really is. If the universe is a body, then the sun is its pineal gland. There it is again—the pinecone. Wait, did I not explain that yet? Sigh. Okay. Sorry. It’s like this. The pine cone is nothing more or less than a stand in for the pineal gland. Becoming like god means cultivating a third eye awakening.

That’s what I believe happened to Eve.

So, either Marie was straddling a chair for the purposes of DMT secretion and astral-projection, or she just tried to make the best of an awkward situation. What this chair needs is more pinecone! 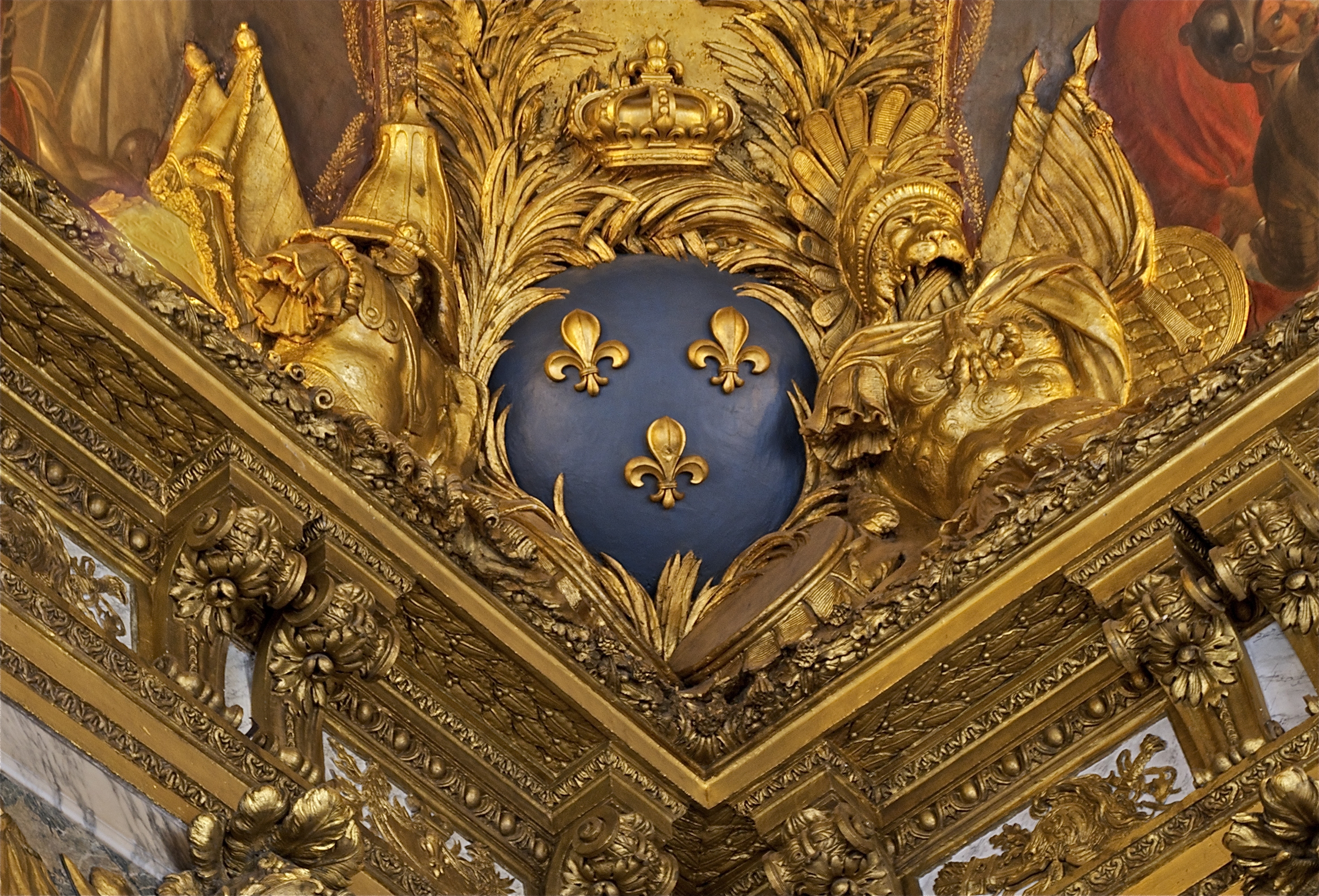 You know the French lily that’s used as a symbol for the Boy Scouts of America? Fleur-de-Lis. Mm-hmm. Third eye awakening. True story, the Fleur-de-Lis was adopted by the first sovereigns of France, the Merovingian kings, and unlike the pinecone, the flower acts as a subtle roadmap of sorts, without being nearly so provocative as the coiling kundalini twin-serpents on the Caduceus. Properly understood, Fleur-de-Lis is the tree of life.

Elvis Presley was the king of rock. Michael Jackson the king of pop. And so, it only makes sense, if titles mean anything, that King Louis XIV was the pineal gland king. Or pinecone king. Fleur-de-Lis king? Wait—what was it again?

See, I had had the bright idea of moving my family to France for several months. Work by day. Sight-see on the weekends. Our very first introduction to French culture was Versailles. Whether in statues or artwork, the gods are everywhere at Versailles. Apollo. Pan. Nephilim hybrids. Serpents. Pine cones. That flamboyant French flower thingy. Indoors or outdoors. Pick any room. Look up or down. I mean, we’re talking a complete 360. Elvis knew how to flick a sweat-drenched scarf. Michael knew how to frisk himself. And King Louis XIV knew how to remind everyone that he could play the part of Apollo the way Liberace played the—um—piano. Mind you, this was the peak of the Copernican Revolution.

Copernicus died in 1543, and “On the Revolutions of the Heavenly Bodies” was not published until the astronomer lay on his deathbed. The sun king was still shy of five when he received the crown on the 14th of May, 1643, precisely one-hundred years after the fact. His reign lasted another 72 years and 110 days, but that’s irrelevant, I think. You never know with these things. The fact that he pushed the Copernican Revolution as a focus for sun worship however was important. Very important indeed. It’s the little details.

Whenever you trudge upon a tourist hot-spot in France, you’re bound to elbow your way through tour groups. Tour groups pile on and off of buses. This means they have schedules. When bunched together as a group, they’re like a battering ram at the ticket booth. Get out of their way. They have a dozen other places to be, not one of which includes the gift shop or a toilet, and you’re standing in the way. They’ll step on your heels and photo-bomb every possible picture in order to make it a reality. Another thing that tour groups have are tour guides. They’re easy to recognize because they walk around with a long pole and a flag. Though the more eclectic ones seem to prefer a foam finger or sparkling glove.

I had already elbowed my way out of the kings’ bed chamber when it happened. Fun fact, the bedroom faces the rising sun in the east. This I didn’t know earlier that very morning. Above his bed an allegory is inscribed. It reads: “France watching over the King in his slumber.” As you can probably imagine, King Louis XIV was compared to Apollo. He was flamboyant like Apollo. He danced to music like Apollo. He swooned the French babes like Apollo. He was literally the David Bowie of his day—just like Apollo. I was thinking about the sacred riddle etched into his bed, despite the fact that I had probably already moved on to the Apollo clock, mutually thinking to myself that the Apollo XIII mission had incidentally used its exact imagery for a logo. 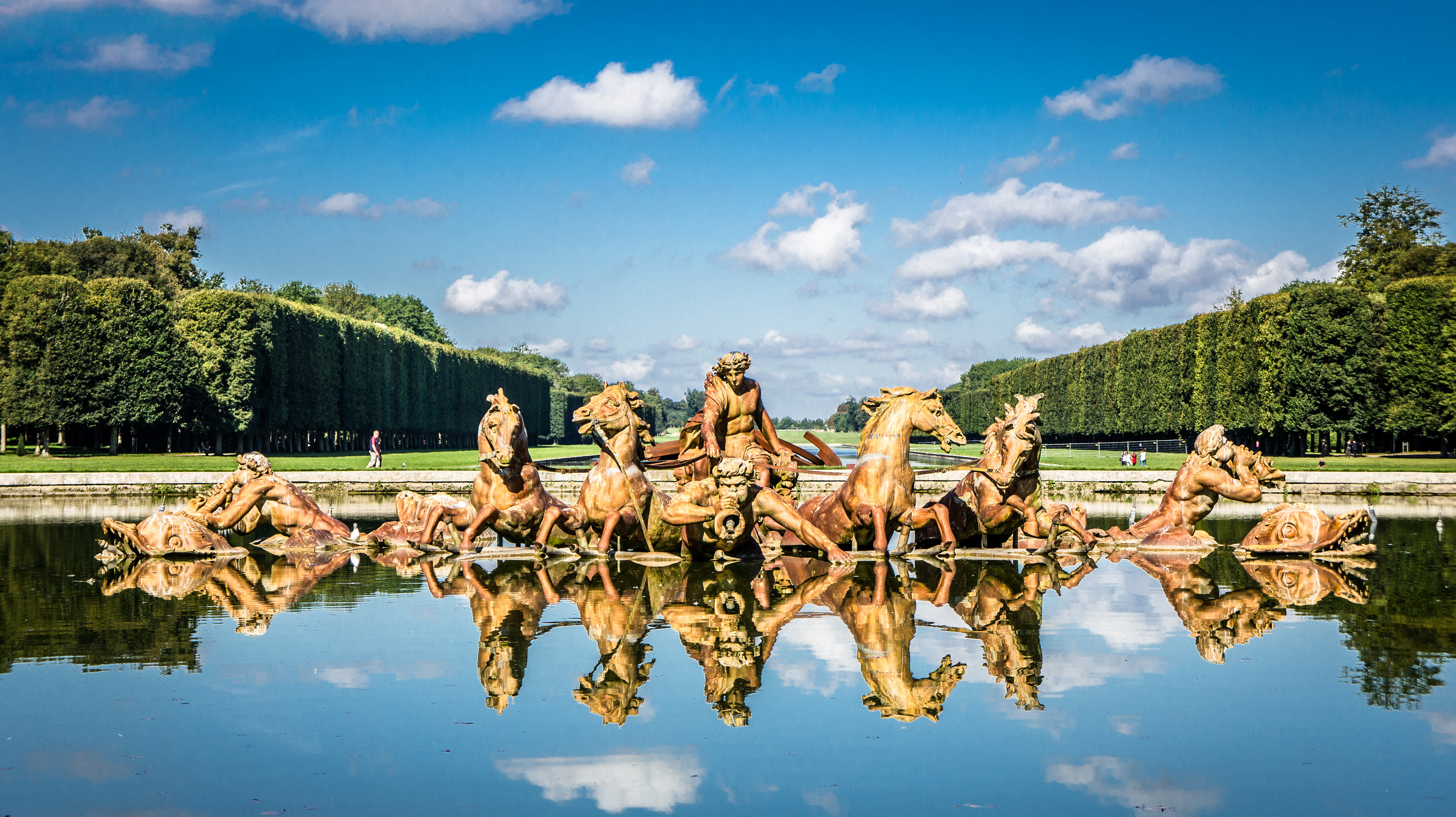 And then a tour guide said: “King Louis XIV placed his bedroom there in order to worship Apollo.”

For all I knew my family and I represented the only flat earthists in the building. And I was like, What!?

I said: “Wait, the Elite pushed the Copernican Revolution in order to worship the sun?”

Okay, I didn’t actually ask the question out loud. I desperately wanted to though. In my imagination however the tour guide shrugged. If it quacks like a duck… Precisely, tour guide. Just as I suspected. Right on the nose. For the record, if memory perfectly serves, she may have been wearing a sparkling glove. How very Apollo of her.

Even the Sabbath was flipped to Sunday. Yahusha was hung from a tree and suddenly we’re taking a knee below the cross of Tammuz. It always comes down to sun worship. Heliocentricism is nothing more than the Mystery religion repackaged using Science.

The Copernican Revolution was a hoax. 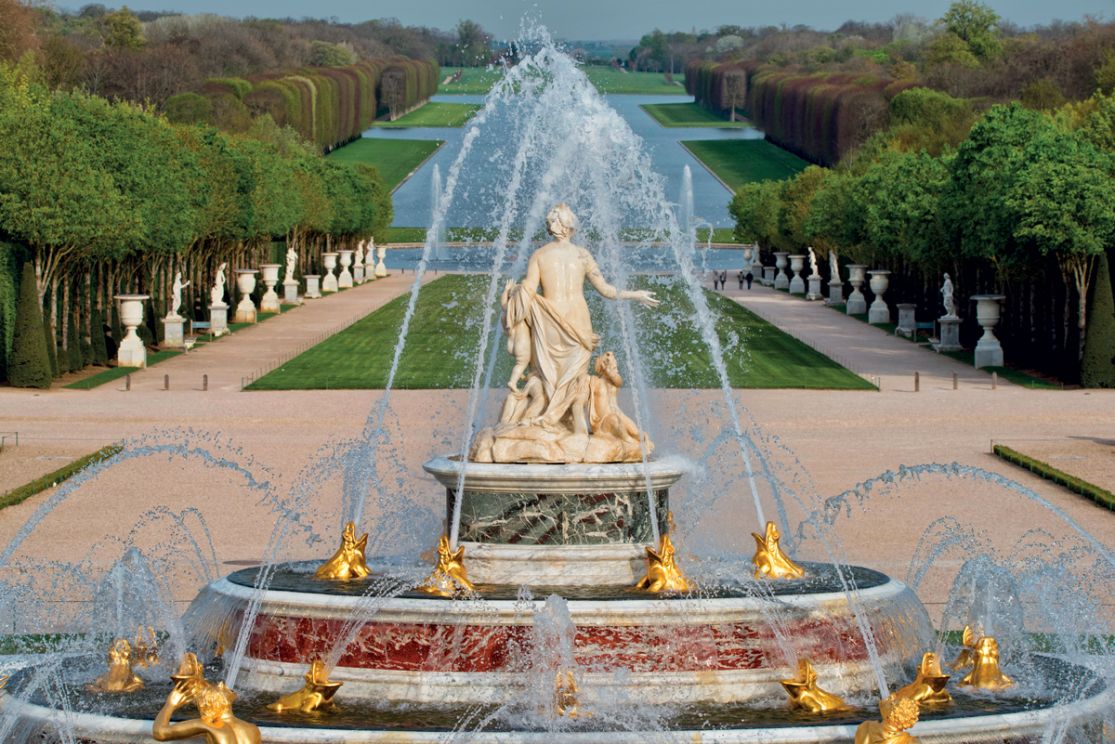