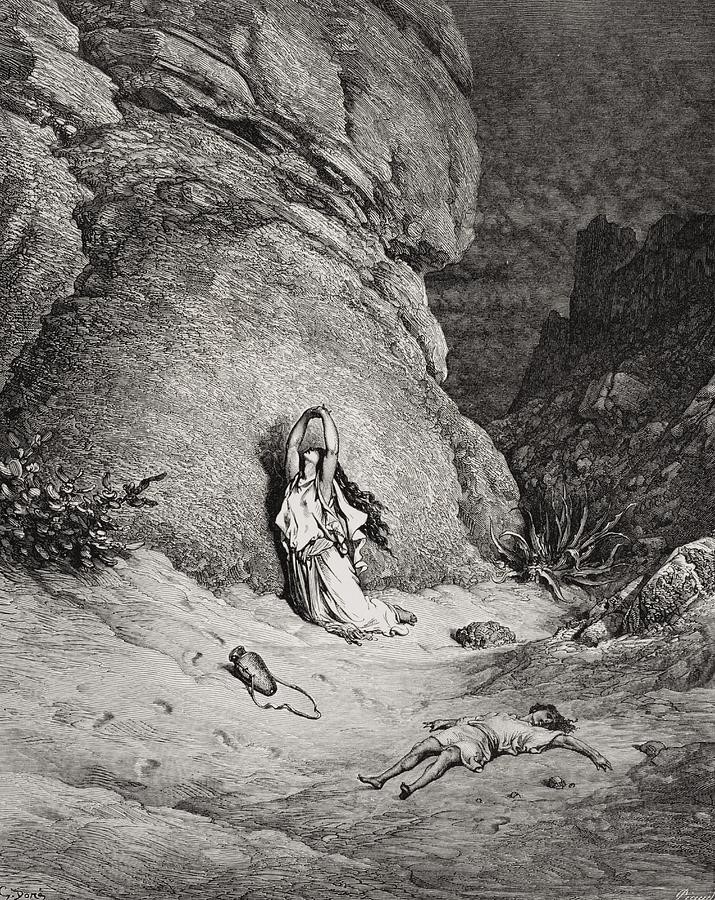 THAT is not to say Nimrod’s kingdom collapsed with Babel. Despite a confusion of tongues intended to handicap the first post-diluvian Emperor, he proved himself a survivor. Much like Ham his grandfather, Nimrod simply sired sons—any great number of little princes and princesses—and, despite language barriers, placed them in thrones of tribute wherever the seventy elohim ruled. I have already established the fact that Ham was a Cain. Serpent seed. That makes Nimrod a Cain.

And so, consider the genealogical pathway to Messiah. It is a pure Sethite line. And yet, there were hazards at every turn. It seems like the children of Cain were constantly knocking at the door, asking for the keys to the kingdom. On multiple occasions, Abraham seemed more than willing to offer it to them. Before this is over, you shall see why Yahuah insisted that Sarah become Queen of the promised seed—by intervention of the Ruach if need be—as Hagar was one of them.

The Hebrew Masoretic introduces Hagar as “an Egyptian slave,” but only after Sarah is incapable of conceiving a child in Genesis 16. In truth, Hagar had entered their lives years earlier, when Pharaoh took Sarai to wife on account of being named Abram’s sister. Only then Hagar was a child. The Masoretic informs us that “Yahuah inflicted serious diseases on Pharaoh and his household because of Abram’s wife Sarai” without describing the symptoms. The purpose was to stop Pharaoh from sowing seed into the woman promised to carry on the Sethite line. It’s serpent seed all over again. Therefore, you have to wonder what sort of disease might stifle intercourse. The Writings of Abraham tells us.

69 AND Elohim hearkened unto my prayer and withheld His ruach from the Egyptians that none of them were able to come at their wives that night.

2 In the morning, consternation reigned throughout the land of Egypt, for no man had been able to lie with his wife all that night.

3 Pharaoh also was greatly perplexed, for although his lust toward Sarai had grown throughout the night, he had been unable to satisfy that lust  because of the curse of Elohim which rested upon him.

4 Therefore, he summoned all the wise men and the physicians of his household, but none could heal him and all had suffered the same affliction.

The answer is erectile disfunction. Sure, Yahuah allowed Satan to father a child with Havah in the Garden, but Gehenna would freeze over before he let him do it again with Sarah. And to make certain of it, all of Egypt went limp until Pharaoh agreed to cease and desist of his actions. He does. Actually, he repents. We’ll turn to that in a moment. But then an odd thing happens. We are introduced to Hagar.

4 And Pharaoh made all matters right with Sarai, and he blessed her with the outpouring of his ruach and she was blessed in his presence.

5 And he gave unto her Hagar, his own daughter, also, to be her companion, and to Hagar he gave many gifts.

Giving Hagar as a gift to Sarah is not so much the oddity. The fact that she’s his daughter is. You already know where this is going. Sarah was spared from potentially mothering a Cain, but now in turn, Sarah will offer her husband the same opportunity.

106 NOW when Sarah saw that she bare neither son nor daughter, it grieved her heart.

2 And she said unto me, Take therefore Hagar, daughter of Pharaoh, to be thy wife, for she is a woman now.

As second witness, the Genesis Targum also outs Hagar as a princess of Egypt. Follow along.

But Sara, the wife of Abram, had not borne to him. But he had a handmaid, an Egyptian, and her name was Hagar, a daughter of Pharaoh, whom he gave to him as a handmaid at the time that he received her, being struck by the Word from before Yahuah.

But then the Targum takes Hagar’s father one step further.

And Sara said to Abram, All my affliction is from thee. Being secure that thou wouldst do me justice, I left the land and house of my father, and came up with thee to a foreign land; and forasmuch as I was not able to become a mother, I set free my handmaid, and gave her to lie in thy bosom; and she seeth that she had conceived, and mine honor is despised before her. But now is my affliction manifest before Yahuah, who will spread peace between me and thee, and the land shall be replenished from us, nor shall we need the help of the progeny of Hagar the daughter of Pharaoh bar Nimrod, who threw thee into the furnace of fire.

The Jerusalem Targum names as the Mizreit handmaid “who is of the children of the people who cast thee into the burning furnace of the Kasdin.” Hagar is a Nimrod. But not just any Nimrod. She’s the granddaughter of Nimrod. That would make Ishmael a great-grandson. 2nd great-grandson of Ham. 9th great-grandson of Cain. And now you know why Yahuah insisted that Sarah be the mother of the promised seed.

There are so many close calls in Scripture that we can only assume by implication that many within the Sethite ranks but outside the direct Messianic line were affected. That begs the question I am most frequently asked. What of our blood? Specifically, does the identity of our mommy and daddy affect our salvation? The answer to that is a complicated one. Yes, it does. Then again: No, it doesn’t. Yahuah gave ample chances for Cain to be a good boy. Ishmael as well. More often than not however, the seed line chose naughty. But not always. No matter your bloodline, you can choose to become the seed of Abraham.

Yahusha said as much. The scene occurs in the Temple soon after the scribes and Pharisees bring Yahusha the woman accused of adultery. Here their confrontation continues.

37 I know that you are the sons of Avraham, but you want to put me to death because my word is not within you. 38 I speak that which I saw from the Father; but you do that which you saw with your father.” 39 They answered and said to him, “Avraham is our father!”  So Yeshua said to them, “If you are the sons of Avraham, do the works of Avraham!  40 But you want to kill me, a man who speaks truth to you–that which I heard from El.  Did Avraham do this?  41 You do the work of your father.”  Then they said to him, “We were not born out of fornication. We have one El and one Father.”

42 So Yeshua said to them, “If El were your Father, you would have loved him, for I came from El, and I went out from El; and I did not come from myself—but he sent me. 43 Why do you not recognize my word? It is because you are not able to obey him! 44 You are the sons of Ha-Satan your father, therefore you take pleasure in doing the will of your father. He was a murderer at the beginning, and did not abide in truth, for there is no truth with him. For everything which he speaks is a lie; he speaks that which is night to him; for he is its father, and he is a liar. 45 But if I speak truth to you, you do not believe me. 46 Who of you traps me in sin? If I speak truth to you, why do you not believe me!? 47 Whosoever is from El, obeys the word of El; and this is why you do not obey it—because you are not from El.”

The rulers over Israel are the cursed sons in both the literal and figurative sense. Not looking good for a certain bloodline, I agree. But notice his conclusion. Those who obey the words of El are sons of Abraham, whereas those who obstinately disobey are the sons of Satan—whatever their genetics.

Pharaoh may have derived from the lineage of Cain, being the son of Nimrod, but he repented. Earlier, when Abram confronted Nimrod in Ur, Nimrod tossed him, patty-cakes and all, into a fiery furnace. But Pharaoh, recognizing that Abram was delivering the true gospel, turned to the Most-High, where-in we read:

74 WHEN the king had been blessed, he was that he had recovered and he praised Yahuah for his recovery.

2 Wherefore, I took him into his garden and baptized him in the Name of Yahuah and all his household with him.

3 And when I had blessed him again, Sarai came before him and he knew that he had been healed for the Ruach of Elohim fell upon him with this testimony and the witness thereof was sure.

75 THEN Pharaoh arose and praised Yahuah and proclaimed to all his people that they should worship the Most-High Elohim who had healed them.

2 And he desired to enter into a covenant of eternal brotherhood with me that I should be his father and he should be my son.

3 Wherefore, I said unto Pharaoh, Put forth thine hand upon my thigh and I will make thee swear before Yahuah, the Elohim of heaven and earth, that thou shalt be true to me and thine heirs to mine heirs forever, and I shall receive thee unto myself to be my son and brother to inherit all the blessings of mine house and to bear my priesthood forever.

4 Wherefore, Pharaoh put his hand upon my thigh and swore to me according to this oath.

5 And when he had sword, Lot sealed him mine that he should be my son in time and eternity and Pharaoh rejoiced therein.

Notice how Pharaoh and Abram are in no way related to one another except through Noah, but even their mothers are not the same. And yet, Pharaoh became a son. Abram his father. Not genetics. Despite a cursed lineage, the son of Nimrod chose to be baptized into the Ancient Order and was therefore accredited as the family of Messiah—spiritually speaking. It would not always remain so. Pharaoh was still a Nimrod. Therefore, the blood of Ham would once again claim the throne. Yahuah says as much to Abram a few chapters later.

Behold, the day cometh when the seed of Ham shall again rule in this land and at that day thy seed shall be in bondage to them, but I will raise up a prince from among the Egyptians who shall lead them out of bondage and they shall inherit the land of Canaan, even that land which I have promised unto thee and to thy seed after thee for an everlasting inheritance.

With Hagar, it’s the same. When the angel of Yahuah appeared to her, she chose the angel. Consider the following.

13 And Hagar gave thanks, and prayed in the Name of the Word of Yahuah, who had been manifested to her, saying, Blessed be Thou, Eloha, the Living One of all Ages, who hast looked upon my affliction. For she said, Behold, Thou art manifested also unto me, even as Thou was manifested to Sara my mistress.

14 Wherefore she called the well, The Well at which the Living and Eternal One was revealed; and, behold, it is situate between Rekam and Chalutsa.

What seed do you suppose Ishmael chose? 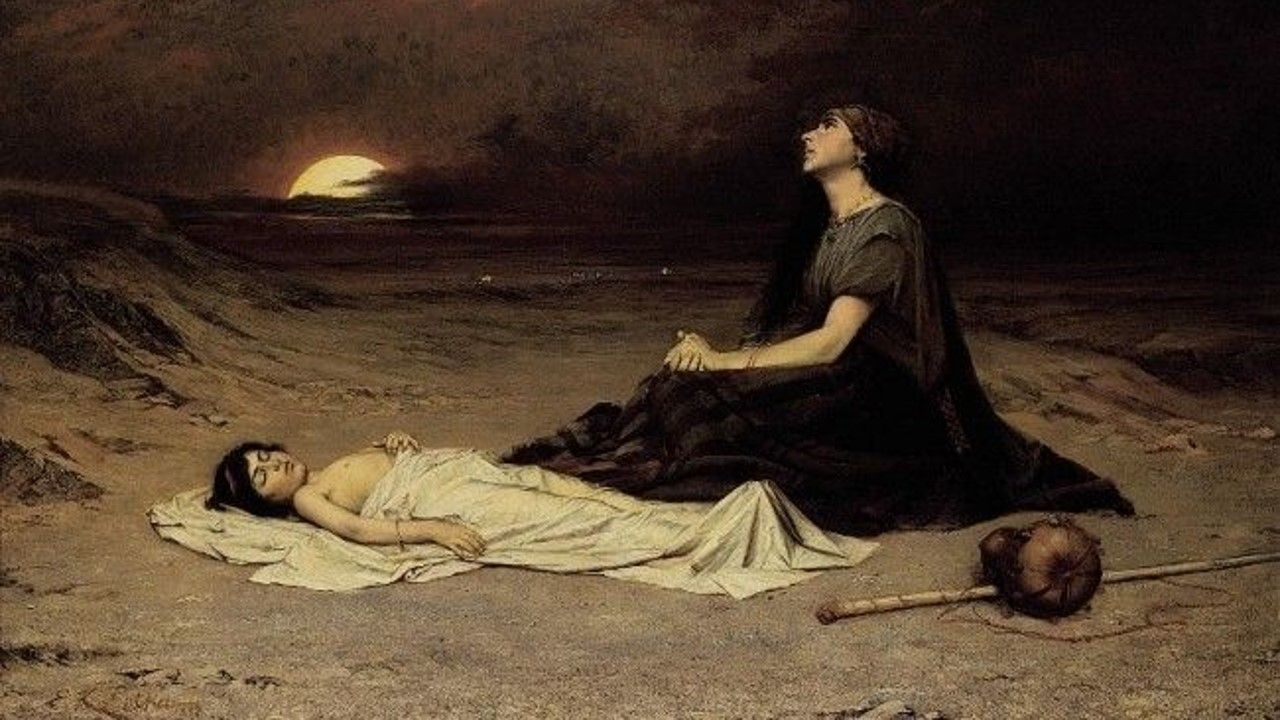