TITANIC: A True Hollywood Story (Hint, It’s All a Movie)

THE SINKING of the Titanic was a staged hoax.

Oh, I know. They have explanations for everything. I’ve been to Wikipedia too. It takes mental gymnastics in order to lift the Titanic myth to the surface of cognitive reality. I love watching people’s frail reality begin to malfunction and fade.

We were initially told that it was discovered by a certain Robert Ballard in 1985. But even that story is intellectually dishonest. We would much later come to learn that it was military funded. It was nothing more than a Cold War exercise. Can anybody say moon landing? Come to think of it, Robert Ballard was commissioned directly out of ROTC into Naval Intelligence. The recovered artifacts are still advertised as privately owned by the dummy-firm RMS Titanic Inc. There’s the third red flag, and I’m only several lines in.

If you’ve still read this far, it is only because you’re thinking about writing your congressman to complain. You’ve been to the Great Smoky Mountains. You took your family on a trip to Dollywood. In Pigeon Forge, there’s a giant cartoon King Kong climbing up a replica of the Empire State Building. It was either that or the Titanic Museum. Tickets cost something like $30 for adults. $14 for children. You decided to splurge and take the plunge. The wax museum would have to wait for next time. They gave you a replica Titanic ticket as part of admission, so that each member of your family was assigned the name of an actual passenger. At the end of your tour you found out that you lived while your spouse died. After promising you’d never love anyone else the same way again, you and your spouse stood in the gift shop and discussed blowing next year’s budget by purchasing your very own White Star Line replica china, something you’d roll out at dinner parties, but decided that a copy of the soundtrack featuring Celine Dion would do instead, despite junking the original CD after college. Your heart went on and on and on the entire thousand miles trip home to Kansas or Nebraska.

“That’s it! I sat through Noel’s flat earth and mud flood crap! But now he’s messing with Celine Dion! This time he’s gone too far!”

When it comes to the little white lies, they need you to gush your heart out at the movie. The performance is one of the most ancient practices of magic, and originates in Babylon. They need academy award winners to play the parts, complete with sweeping musical scores, in order to emotionally transform the fabrication into a reality. They need well-financed memorial museums cropped up on every continent in order to reinforce the indoctrination. Above all else, the lie itself—however preposterous—must continue on, at the risk that everything else unravels.

It’s a museum. Seat of the Muses. Demonic inspiration.

And who tutored the Muses?

Wherever there’s a mainstream agenda, rest assured that a curtain needs pulled. I don’t care if it’s the capital “H” word or the touring exhibit of King Tut. Pull the curtain.

The footage was faked.

We are led to believe the ship was discovered some 2.25 miles under the ocean’s surface in the pitch of black. Given five to ten minutes of an actual dive, the turquoise ocean blue gives way to dark water. All light has disappeared. And we’re talking a sackcloth. For this very reason alone the Titanic footage doesn’t look right. It’s too blue. There’s far too much light.

Even the ship’s size looks off.

Seriously, it looks like a model. For all I know they originally filmed this at NASA’s Neutral Buoyancy Laboratory, and only had enough room to build half it. No, I didn’t. Too late. I just did. 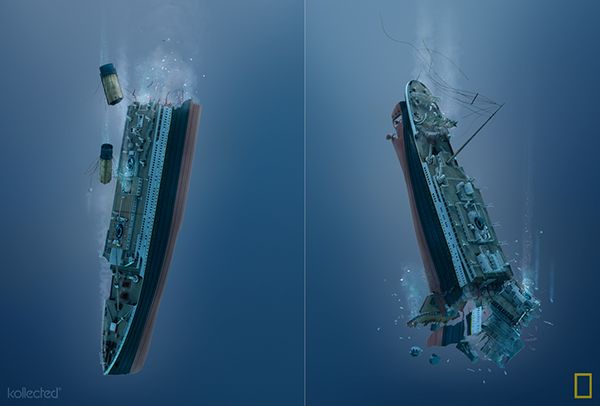 We need to remember that the Titanic was still believed to have sunk in one piece before Ballard’s discovery. The 1976 film Raise the Titanic! imagined holes in its hull getting repaired, the ship pumped full of compressed air, and then rocketed to the surface like a submarine. Ballard gave the longstanding belief an unexpected twist to the plot. It had been severed in half—the back end completely destroyed. Though nobody could make sense of that new reality by the release of Jim Cameron’s film in 1997, actors playing survivors in the movie suddenly witnessed or recalled seeing Siemens-Martin formula steel plating split in half due to an iceberg or whatever. Remember how the fuel from two airlines melted steel and flattened three buildings? This was kind of like that.

If not NASA—because the cleaning bill would have been humongo—they simply dropped it in a lake. Sure, they had to fish out all the sturgeon and the bass, to make it somewhat more authentic, but the lack of sea-life is important to this narrative. Where is the sea life? The bio-luminescence in the footage should be nothing short of awe inspring. And yet we’re given nada. This is one of the problems with Science hoaxes. The Science of its day always changes. You know the parable of the tortoise and the hare? The hoax is the hare. In 1985, it was Scientifically believed that ocean life was void at 12,000 feet—far from human observation. But we know today the opposite is true. Scientists now believe such ocean depths may rival the tropical rain-forests for biodiversity. Oops. Remember how Neil Armstrong never saw stars between the earth and the moon—not even on its lunar surface? Again, the Titanic wreckage footage offers us nothing. This is a problem, and why The History Channel introduced the discovery of shrimp in its own wreck footage. If you have seen it for yourself, then you’ll likely agree that we were given no warning. The shrimp jumps at the camera, as if this were intended for an IMAX film in 3-D. It is so painfully obvious a CG shrimp. Watching this dribble leads me to believe they’ve discovered the whereabouts of Bikini Bottom. Why not just add a pineapple house and SpongeBob SquarePants? A Jim Henson Muppet would have been slightly less obvious.

Another nice touch to the Ballard discovery was the inclusion of the little girls’ leather shoes still sitting at the bottom of the Atlantic. They even tell us it serves an x marks the spot where she landed. Somehow bacteria ate away at her flesh and bones, even her clothes, but left behind a practically perfect pair of leather shoes.

Why would they lie about something like that, right?

Well, for one, it doesn’t add up. Remember how I told you the wreckage coordinates? They’re not the same coordinates given by the Titanic’s final distress signals on the early morning hours of April 15. That’s very important to the narrative—why? Because nobody found the Titanic at its last reported whereabouts. If nothing else, just think about that awkward fact for a while. Let it ferment in your mind like a pregnant pause. And while you’re at it, ponder this. They don’t want anybody peeping in upon the wreckage because the wreckage doesn’t exist.

You know how Neil Armstrong’s boot print and the Apollo 11 lunar lander cannot be found on the Mare Tranquillitatis lava plain? The official story is that the American flag they left behind is now bleached white. This is kind of like that. Somebody apparently found among the wreckage a newly discovered species of rust-eating bacterium. They even named it Halomonas titanicae. And it’s causing rapid decay to the ship. For whatever reason, the bacteria had no effect on the little girls’ shoes, nor the first-class furniture. Despite the superpowers of teak, they estimate this newly discovered rust-eating bacterium will completely digest the entire ship by 2025—or at the latest by 2030.

See what I mean? They need it to go away.

Until that happens, when the crime scene is scrubbed, they have UNESCO to protect the site from people, so that the bacteria can do its thing. Mm-hmm. Meanwhile, when Buzz Aldrin isn’t landing on the moon’s Mare Tranquillitatis lava plain or vacationing at the south pole, he’s taking a yellow submarine down to the Titanic wreckage. You can’t make this stuff up. For whatever reason, the Bohemian Grove people have decided that Buzz Aldrin is the sort of face that can sell Americans on totally made up stories involving places that either do not exist or cannot be humanly reached.

It’s all a movie.

Don’t worry. Assuming they don’t push its decay deadline another decade or two, we still have ten years for a few James Bond villains like Richard Bronson or Elon Musk to leave their volcanic island-base behind and take their very own submarine down there. Apparently, they’re even prepping for pedestrian submarine voyages at over $100,000 a pop.

A good magician knows how to do more than pull a bunny out of his hat. He can saw a woman in half too.

Mathis, Miles, “The Titanic: The Fraud That Keeps On Giving“