The Testament of Our Father Adam

THE TESTAMENT OF OUR FATHER A’DAM

And so, I, together with the angels, used to hear the sound of mighty waves, a sign which would prompt them to lift a hymn of praise 6 to the Creator. The sixth hour is the construction of clouds and of the great fear 7 which comes in the middle of the night. The seventh hour is the viewing of their powers while the waters are asleep. And at that hour the waters (can be) taken up and the priest of Elohiym mixes them with consecrated oil and anoints those who are afflicted and they rest.

8 The eighth hour is the sprouting up of the grass of the earth while the dew 10 descends from heaven. The ninth hour is the praise of the cherubim. The tenth hour is the praise of human beings, and the gate of heaven is opened through which the prayers of all living things enter, and they worship and depart. And at that hour whatever a man will ask of Elohiym is given to him when the seraphim and 11 the roosters beat their wings. The eleventh hour there is joy in all the earth when 12 the sun rises from Paradise and shines forth upon creation. The twelfth hour is the waiting for incense, and silence is imposed on all the ranks of fire and wind until all the priests burn incense to his divinity. And at that time all the heavenly powers are dismissed. The End of the Hours of the Night.

2 The Hours of the Day

8-9 The eighth hour is the praise of fire and of the waters. The ninth hour is the 10 entreaty of those angels who stand before the throne of majesty. The tenth hour is the visitation of the waters when the spirit descends and broods upon the waters and upon the fountains. And if the spirit of Yahuah did not descend and brood upon the waters and upon the fountains, human beings would be injured, and everyone the demons saw they would injure. And at that hour the waters (are) taken up and the priest of Elohiym mixes them with consecrated oil and anoints those 11 who are afflicted, and they are restored and healed. The eleventh hour is the 12 exultation and joy of the righteous. The twelfth hour, the hour of the evening, is the entreaty of human beings, for the gracious will of Elohiym, Yahuah of all.

A’dam said to Sheth, his son, “You have heard, my son, that Elohiym is going to come into the world after a long time, (he will be) conceived of a virgin and put on a body, be born like a human being, and grow up as a child. He will perform signs and wonders on the earth, will walk on the waves of the sea. He will rebuke the winds and they will be silenced. He will motion to the waves, and they will stand still He will open the eyes of the blind and cleanse the lepers. He will cause the deaf to hear, and the mute to speak. He will straighten the hunchbacked, strengthen the paralyzed, find the lost, drive out evil spirits, and cast out demons.

2 He spoke to me about this in Paradise after I picked some of the fruit in which death was hiding: ‘A’dam, A’dam do not fear. You wanted to be elohiym; I will make you elohiym, not right now, but after a space of many years. I am consigning you to death, and the maggot and the worm will eat your body.’ ‘”And I answered and said to him, ‘Why, my Adonai?’ And he said to me, ‘Because you listened to the words of the serpent, you and your posterity will be food for the serpent. But after a short time, there will be mercy on you because you were created in my image, and I will not leave you to waste away in Sheol. For your sake I will be born of the Virgin Mariyam. For your sake I will taste death and enter the house of the dead. For your sake I will make a new heaven, and I will be established over your posterity.

4 And after three days, while I am in the tomb, I will raise up the body I received from you. And I will set you at the right hand of my divinity, and I will make you elohiym just like you wanted. And I will receive favor from Elohiym, and I will restore to you and to your posterity that which is the justice of heaven. You have heard, my son Sheth, that a Flood is coming and will wash the whole earth because of the daughters of Qayin, your brother, who killed your brother Abel out of passion for your sister Lebuda, since sins had been created through your mother, Havah. And after the Flood there will be six thousand years (left) to the form of the world, and then its end will come.

6 And I, Sheth, wrote this testament. And my father died, and they buried him at the east of Paradise opposite the first city built on the earth, which was named (after) Enoch. And A’dam was borne to his grave by the angels and powers of heaven because he had been created in the image of Elohiym. And the sun and the moon were darkened, and there was thick darkness for seven days. And we sealed the testament and we put it in the cave of treasures with the offerings A’dam had taken out of Paradise, gold and myrrh and frankincense. And the sons of kings, the magi, will come and get them, and they will take them to the son of Elohiym, to Bethlehem of Judea, to the cave. The End of the Testament of Our Father A’dam.

4 Also from the Testament of Our Father A’dam”

1 The heavenly powers: what they are like and how each of their orders is occupied in the service and the plan of this world. Listen, my beloved, as they are set in order one after another from the bottom, until we reach those who carry our Adonai Yahusha HaMashiach and bear him up. The lowest order is the angels. And the plan has been revealed to it by Elohiym concerning every human being whom they watch over, because one angel from this lowest order accompanies every single human being in the world for his protection. And this is its service.

2 The second order is the archangels. This is the service: directing everything in this creation according to the plan of Elohiym, whether powers or animals, birds, or creeping things, or fish, and to speak briefly and in short, whatever exists in this creation, besides human beings, they care for it and guide it.

3 The third order, which is the archons. This is its service: moving the air so that a cloud rises from the ends of the earth, according to the words of David the prophet, and rain falls upon the earth. And this (order) makes all the variations in the atmosphere, sometimes rain and sometimes snow and sometimes hail and sometimes dust and sometimes blood. And it varies them. These also belong to this (order): thunder and the fire of lightning.

4 The fourth order, which is authorities. This is its service: the administration of the lights, of the sun and the moon and the stars. 5 The fifth order, which is the powers. This is its service: they keep the demons from destroying the creation of Elohiym out of their jealousy toward human beings; for if the cursed nature of the demons were allowed to accomplish the lust of its will, in an hour and a moment they would overthrow the whole creation. But the divine power stops them, for a watch is set over them lest they succeed in achieving the lust of their will.

6 The sixth order, which is the dominions. This is its service: they rule over kingdoms, and in their hands are victory and defeat in battle. And this is shown (to be) so by (the example of) the Assyrian king. For when he went up against Jerusalem, an angel descended and ravaged the camp of the wicked, and one hundred eighty-five thousand died in one moment. And also the blessed Zechariah saw the angel in the form of a man riding on a red horse standing among the trees of the tabernacle, and following him (were others on) white and red horses with lances in their hands. And Yahudah the Maccabee also saw the angel riding on a red horse all decked out with gold trappings. When they saw him, the camp of Antiochus the wicked fled before him. And wherever there is victory or defeat, these bestow it at the prompting of the living Elohiym, who commands them in the hour of battle.

8 These other orders, thrones and seraphim and cherubim, stand before the majesty of our Adonai Yahusha HaMashiach and serve the throne of his magnificence, glorifying him hourly with their “holy, holy, holy.” The cherubim bear up and reverence his throne and keep the seals; the seraphim serve the inner chamber of our Adonai; the thrones guard the gate of the holy of holies. This is truly the explanation of the services according to the plan of the angels in this world.

By the Power of Our Adonai’s Help the End of the Writing, the Testament of Our Father A’dam. 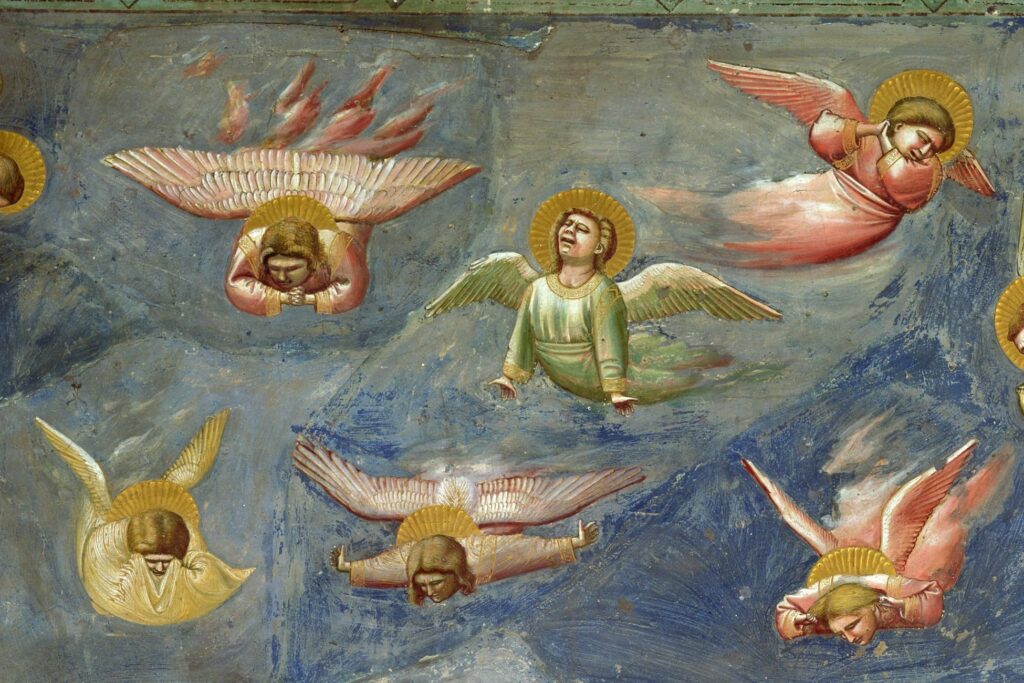