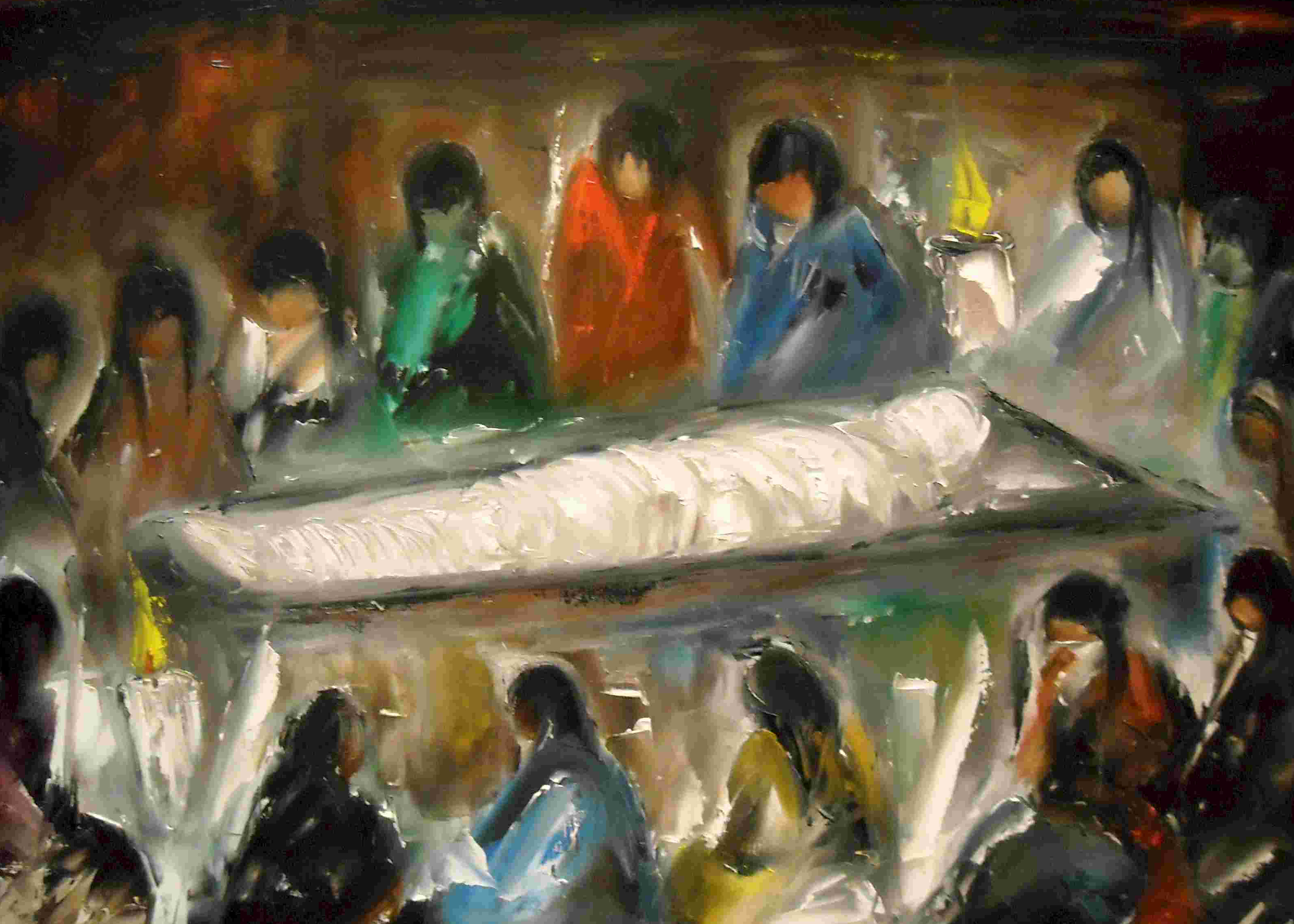 “For in death there is no remembrance of thee: in the grave who shall give thee thanks?” (Psalm 6:5)

LAZARUS WAS NOT WELL. BUT THAT’S SOMEWHAT of an understatement. Fact is, Lazarus was dying, and everybody knew it. His sisters Mary and Martha sent a currier from their town of Bethany east across the Jordan to find Jesus. How long he sought for the Savior is unknown, but the return trip would prove a two days journey. Lord, behold, he whom You love is sick, the sisters had said, and their message was clear. If He wanted to say goodbye to His dear friend, let alone save him from his ills, it had better be now. But it was too late. By the time Jesus received the news, Lazarus was already dead. At that very hour he had likely been ceremoniously washed and anointed with myrrh, aloes, and nard, before being elaborately wrapped in a shroud, and then paraded to his tomb among the wails of both loved ones and paid professionals, all of whom threw dust in their hair as a demonstration of their sorrow, and flutists played doleful arrangements. Within eight hours of his death, all of this would have been accomplished. And Jesus knew it.

Regardless, Jesus had another message for Mary and Martha. He told their courier: “This sickness is not to end in death, but for the glory of God, so that the Son of God may be glorified by it.” So began the messengers return journey to Bethany without the man he had been sent to retrieve. Jesus would tarry another two days.

The Apostle John records that Jesus then told His disciples: “Our friend Lazarus sleeps, but I go that I may wake him up.”

His disciples seemed puzzled by this. They said, “Lord, if he sleeps he will get well.”

Then Jesus spoke to them plainly, “Lazarus is dead.”

If they had confused Jesus’ message to the sisters—specifically, that Lazarus was not expected to die—it is understandable. However, describing the dead as a sleeping patron was also not out of line with Biblical revelation. David had written of making his bed in Sheol (Psalm 138:9), and much earlier in ancient Hebrew history, a lamenting Job had confessed he wished he died before childbirth. To this effect he cried: “Why did I not die at birth? Why did I not perish when I came from the womb?…For now I would have lain still and been quiet, I would have been asleep; then I would have been at rest…There the wicked cease from troubling, and there the weary are at rest (Job 3:11-17).”

Upon finally arriving at Bethany, Jesus and His disciples found that Lazarus had already been laid in the grave for four days. The stench had even set in. When Martha heard that Jesus was coming, she immediately went to meet Him in order that she might protest the couriers’ response, and more importantly, His delayed arrival. But Mary stayed at the house.

“Lord, if You had been here, my brother would not have died,” Martha said. After considering who it was that she was speaking to, it is possible that she reflected upon the message her courier had returned two days earlier, and added: “Even now I know that whatever You ask of God, God will give You.”

Jesus said to her, “Your brother will rise again.”

Martha then spoke the most telling doctrine of the Hebrew faith and the plain teaching of the Bible. She confessed, “I know that he will rise again in the resurrection on the last day.”

Jesus certainly did not disagree with her. The dead would resurrect on the last day. Her theology was sound. Furthermore, the dead are unconscious, waiting in the grave for the day of their resurrection. If He added anything to her doctrine, it was not to inform her or the reader of John’s Gospel that Lazarus had ascended to heaven or some spiritual holding cell while he consciously waited for the fulfillment of that day. No, Lazarus was dead. Rather, Jesus was the living Redeemer who would one day stand upon the earth, and whom the troubled Job had longed to see, “after my skin is destroyed, yet from my flesh I shall see God.”

Jesus said unto her, “I am the resurrection and the life. He that believeth on Me, though he were dead, yet shall he live. And everyone who lives and believes in Me will never die. Do you believe this?”

Martha believed. “Yes, Lord; I have believed that You are the Christ, the Son of God, even He who comes into the world.”

When Mary rushed to where Jesus was, and saw Him, she fell down at His feet and wept, saying: “Lord, if You had been here, my brother would not have died.”

Jesus asked, “Where have you laid him?” 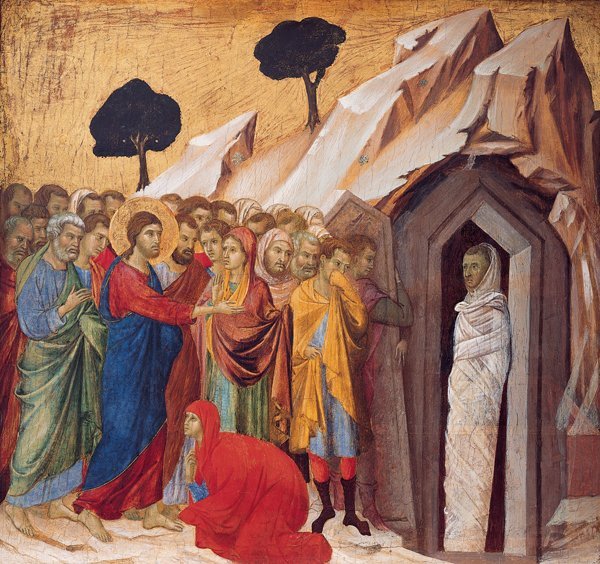 I am often told that the Bible’s purposeful reference to sleep is only a metaphor for the illusion of death—particularly those who are left behind and cannot see the immortal ghost leave the body behind. It is all poetic, they say. What they mean to say, I am further told, is that only the body sleeps while the conscious awakens in heaven. There is however no allusion to the contrary immortal soul, poetic or otherwise. As one will find with the whole of inspired Scripture, the Gospel of John complies, and presents us with no ghosts, no conscious knowledge of the afterlife. Lazarus has not ascended to heaven and then—after Jesus beckoned and called his name—descended again to tell of it. There would be no high profile book deals or Hollywood scripts aptly titled “Four Days in Heaven.” If Lazarus slept—and he most certainly did sleep—he was not an exception to the rule. Jesus mourned the loss of His friend. Lazarus was dead.

Mary and Martha and his gathering of loved ones, not forgetting the Creator, were mutually weeping in accordance with the ancient Hebrew worldview—one which ascribed to the revelation given to them through the Prophets and the Psalmists and the whole of inspired Scripture. Solomon described death as a lack of memory. “For the living know that they shall die: but the dead know not anything, neither have they any more a reward; for the memory of them is forgotten (Ecclesiastes 9:5).” Furthermore, “Whatsoever thy hand findeth to do, do it with thy might; for there is no work, nor device, nor knowledge, nor wisdom, in the grave, whither thou goest (Ecclesiastes 9:10).”

Quite similarly, Isaiah wrote: “For the grave [Sheol] cannot praise thee, death cannot celebrate thee: they that go down into the pit cannot hope for thy truth (Isaiah 38:18).”

From Job to Isaiah, including Solomon and the Psalmists in-between, the message was understood. Though Lazarus had lived in such a time as to befriend the very Redeemer whom Job longed to behold with his own eyes, he had succumbed to the tomb before the Davidic Kingdom could be ushered in. As consequence, his dwelling place was Sheol. He could no longer praise nor celebrate the Lord. His only contributions were silence. For Lazarus, there was no knowledge, no wisdom, nor memory of life. Only the living, Isaiah would conclude, could praise the Lord. “The living, he shall praise thee, as I do this day: the father to the children shall make known thy truth.” But not the dead.

So Jesus, again being deeply moved within, came to the tomb.

“Take away the stone,” He said.

Once more, Martha protested. “Lord, by this time there will be a stench, for he has been dead four days.”

Jesus reminded her of the courier’s message. “Did I not say to you that if you believe, you will see the glory of God?”

The time had come for Jesus to act. They obeyed Him, and rolled away the stone, and Jesus, after praying to the Father in heaven, cried with a loud voice: “Lazarus, come forth~”

John records, “And he that was dead came forth, bound hand and foot with grave clothes: and his face was bound about with a cloth (John 11:43).” If the Apostle neglected to speak of the soul of Lazarus adjoining into his flesh, having only returned from beyond the grave, it’s because such a notion was not even considered in ancient Hebrew thinking—nor the Scriptures which informed them.

Jesus said to them, “Unbind him, and let him go.”

According to the Apostle John, it was Jesus’ final miracle before His triumphant entry into Jerusalem. His own death would follow. Soon, His followers would behold the greatest miracle in the history of the world.