The Tragedy of King Saul & the Necromancer

The Divine Council | The Mortal Soul

“THEN SAMUEL TOOK THE HORN OF OIL, and anointed David in the midst of his brethren, and the Spirit of Yahweh came upon him from that day forward (1 Samuel 16:13).” Though we are not intimately told about the judicial sessions going on behind the scene in heaven, the reader who is well informed on the ancient Hebrew worldview of the divine council can begin to put the pieces together when immediately thereafter he reads: “But the Spirit of Yahweh departed from Saul, and an evil spirit from Yahweh troubled him (16:14).” This even prompted his servants to inform their king, “Behold now, an evil spirit from God troubleth thee.” The irony here is that Saul summoned David, the very soul whom the Spirit of Yahweh had chosen in his stead, so that whenever the evil spirit approved in God’s council came upon Saul, David played a harp, that the king might be refreshed, and also that the evil spirit might depart from him.

By the end of his life, Saul has become desperate. The Prophet Samuel is long dead. He has failed to override the judgement of God’s council by killing David. Likewise, God has departed from him, answering his cries no more. Quite tragically we even read that Saul has traded in the Prophets of Yahweh for those whom he had once put away—conjurers of the dead. Specifically, he asks for a woman, that he may go and inquire of her. His servants even know where to find one. There is a woman who has familiar spirits in En-dor, they inform their king. So Saul disguises himself, being especially vigilant to visit her by night, and with two men at his side asks that she divine unto the familiar spirit, and bring him up—that is, Samuel—whom he shall name, if it can be done.

But the witch of En-dor is cleverly on to him.

Her welcoming words are perhaps not quite so dissimilar from a prostitute demanding that an officer of the law reveal himself. “Behold, you know what Saul has done, how he has cut off those who are mediums and spiritists from the land.” She likely suspects that her three nighttime visitors are officials from the king’s court, if not the king and his bodyguards, and even adds: “Why are you then laying a snare for my life to bring about my death?”

Saul then gives himself away, if he hasn’t already. “As Yahweh liveth, there shall no punishment happen to thee for this thing.” That Saul would evoke the name of the LORD as a down payment of security for necromancy is a strange thing. Saul clearly knows the decision of Yahweh’s council in heaven, that God has indeed sent an evil spirit his way, and therefore has no authority to bolster such a claim. Perhaps he is falsely prophesying, or only lying—or both. Or maybe the truth of the matter is that everyone present had become delusional. It is however unlikely that the witch is deceived—at least, where her craft is concerned. The diviner of En-dor clearly has the upper hand, from the moment they enter until she kills the fattened calf and kneads flour into unleavened bread at the end. 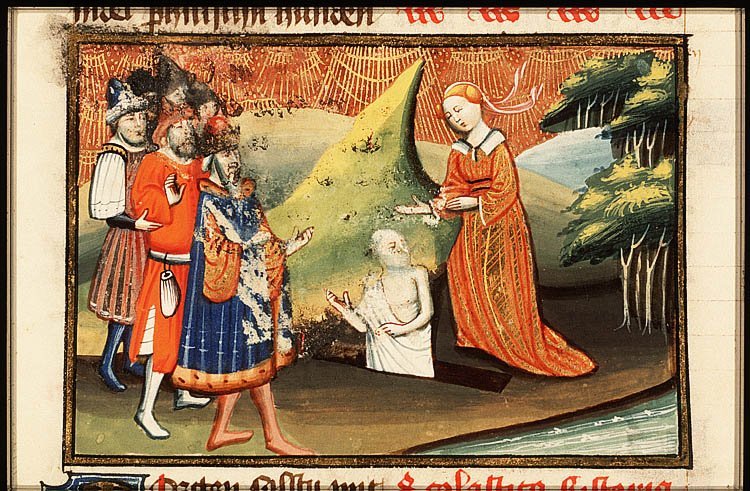 The king then falls for a rookie mistake—a knock on the wall, thrown voice, or levitating table sort of parlor trick which gives the séance its gullible allure. We are given no details as to how the witch summons the Prophet except that she suddenly saw Samuel, and immediately cries in a loud voice.

And then: “Why hast thou deceived me? Thou art Saul!”

“Be not afraid,” the unsuspecting Saul attempts to comfort her. “What sawest thou?”

“I saw gods [elohim] ascending out of the earth.”

If the witch is to be believed, she has perceived another sort of divine council. This gathering however is not a vision from the heaven of heavens, but one which derives from the pits of Sheol. The fact that the spirits rise from the ground is consistent with the ancient Near Eastern view of the cosmos and the Bible, and furthermore, that chthonic deities are summoned to assist in retrieving the ghost is attested by Mesopotamian tradition. Saul certainly knows where this is going. If elohim are rising from the ground, then their bringing up a member of the dead realm is likely.

The king immediately asks: “What form is he of?”

“An old man cometh up,” she says, “and he is covered with a mantle.”

The writer of 1 Samuel then adds, “And Saul perceived that it was Samuel (1 Samuel 28:14).” Many commentators fail to notice that the gods rising out from the earth and the ghost of Samuel are visible only to the professional and not to Saul, though Samuel’s ghost can speak to Saul and presumably anyone else in the room. The witch’s manipulation has easily won him over. Saul is desperate and emotionally invested. After stooping with his face firmly planted upon the ground, Saul even confesses this much to the voice who soon speaks in their midst.

“I am sore distressed,” he cries in good faith to the old man with the mantle, whom only the witch can see, “for the Philistines make war against me, and God is departed from me, and answereth me no more, neither by prophets, nor by dreams: therefore I have called thee, that thou mayest make known unto me what I shall do.”

The appearance of Samuel has been explained by conservative theologians as either a clever parlor trick of the séance or a conquest of the séance only so much as a demonic apparition was summoned, while others have concluded that we have before us a genuine appearance of the Prophet. Necromancy involves the use of evil spirits—not actual souls or spirits of the dead. For this very reason, many of those commentators do not conclude that God would break His own rules by calling upon one. Still, if it is the last option and God has performed a miracle beyond what is humanly natural, then it should be duly noted that Samuel does not arrive from heaven. He has arisen from the underworld with the gods—the elohim. Furthermore, Samuel complains that Saul has disturbed him from his rest. He is certainly not breaking habit with the cosmic worldview of the Hebrews.

On the other hand, a fortune has been told—certainly nothing out of the ordinary among the Nephilim spirit of demons. I’ll settle with the more likely option. After all, the witch is admittedly demon possessed. If the familiar spirit who bolsters the witch’s parlor tricks by informing their conversation has inside knowledge of God’s council in heaven, we are not told. More than likely, the information provided is nothing beyond the gossip column. It has been long noted that this particular appearance of Samuel in the Bible brings with him his only falsely spoken prophecy. Saul is not killed by the Philistines, as Samuel seems to imply. His own servants even refuse to drive him through with the sword. Saul takes his own life. If anything, Samuel’s prophecy is a self-fulfilling prophecy. Saul sees to it that he masters his own fate rather than let the God of heaven and of earth do it for him. And that should inform us of one important clue as to Samuel’s true identity. He or it is not Samuel.

It can be said that David, while slinging a stone into the skull of a giant, sought to destroy the seed of the serpent, while Saul was counseled by one.