Cosmology | Featured | Newspapers of Our Realm 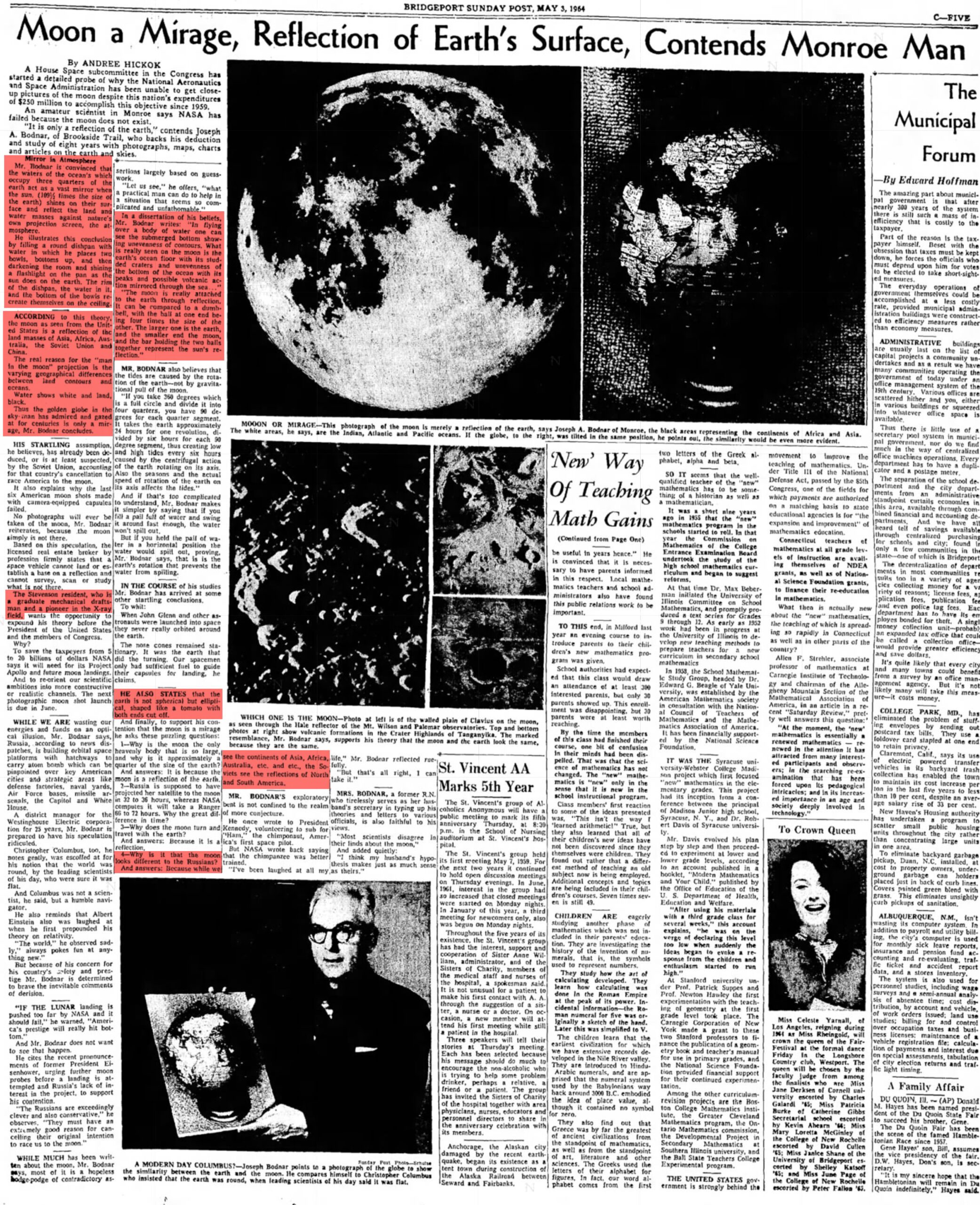 A House Space subcommittee in Congress has started a detailed probe of why the National Aeronautics and Space Administration has been unable to get close-up pictures of the moon despite this nation’s expenditures of $250 million to accomplish this objective since 1959.

An amateur scientist in Monroe says NASA has failed because the moon does not exist.

“It is only a reflection of the earth,” contends Joseph A. Bodnar, a Brookside Trail, who backs his deduction and study of eight years with photographs, maps, charts, and articles on the earth and skies.

Mr. Bodnar is convinced that the waters of the ocean’s which occupy three quarters of the earth act as a vast mirror when the sun (1091/2 times the size of the earth) shines on the surface and reflects the land and water masses against nature’s own projection screen, the atmosphere.

He illustrates this conclusion by filling a round dishpan with water in which he places two bowls, bottoms up, and then darkening the room and shining a flashlight on the pan as the sun does on the earth. The rim of the dishpan, the water in it, and the bottom of the bowls recreate themselves on the ceiling.

ACCORDING to this theory, the moon as seen from the United States is a reflection of the land masses of Asia, Africa, Australia, the Soviet Union and China.

The real reason for the “man in the moon” projection is the varying geographical differences between land contours and oceans.

Thus, the golden globe in the sky man has admired and gazed at for centuries is only a mirage, Mr. Bodnar concludes.

HIS STARTLING assumption, he believes, has already been deduced, or is at least suspected, by the Soviet Union, accounting for that country’s cancelation to race America to the mon.

It also explains why the last six American moon shots made with camera-equipped capsules failed.

No photographs will ever be taken of the moon, Mr. Bodnar reiterates, because the moon simply is not there.

Based on this speculation, the licensed real estate broker by profession firmly states that a space vehicle cannot land or establish a base on a reflection and cannot survey, scan or study what is not there.

The Stevenson resident, who is a graduate mechanical draftsman and a pioneer in the X-ray field, wants the opportunity to expound his theory before the President of the United States and the members of Congress.

To save the taxpayers from 5 to 20 billions of dollars NASA says it will need for it Project Apollo and future moon landings.

And to re-orient our scientific ambitions into more constructive or realistic channels. The next photographic moon shot launch is due in June.

WHILE WE ARE wasting our energies and funds on an optical illusion, Mr. Bodnar says, Russia, according to news dispatches, is building orbital space platforms with hatchways to carry an atom bomb which can be pinpointed over key American cities and strategic areas like defense factories, naval yards, Air Force bases, missile arsenals, the Capitol and White House.

A district manager for the Westinghouse Electric corporation for 25 years, Mr. Bodnar is prepared to have his speculation ridiculed.

Christopher Columbus, too, he notes gently, was scoffed at for his notion that the world was round, by the leading scientists of his day, who were sure it was flat.

And Columbus was not a scientist, he said, but a humble navigator.

He also reminds that Albert Einstein also was laughed at when he first propounded his theory on relativity.

“The world,” he observed sadly, “always pokes fun at anything new.”

But because of his concern for his country’s safety and prestige, Mr. Bodnar is determined to brave the inevitable comments of derision.

“IF THE LUNAR landing is pushed too far by NASA and it should fail,” he warned, “America’s prestige will really hit bottom.”

And Mr. Bodnar does not want to see that happen.

He cites the recent pronouncements of former President Eisenhower, urging further moon probes before a landing is attempted and Russia’s lack of interest in the project, to support his contention.

“The Russians are exceedingly clever and also conservative,” he observes. “They must have an extremely good reason for canceling their original intention to race us to the moon.”

WHILE MUCH has been written about the moon, Mr. Bodnar says, most of it is a hopeless hodge-podge of contradictory assertions largely based on guesswork.

“Let us see,” he offers, “what a practical man can do to help in a situation that seems to complicated and unfathomable.”

In a dissertation of his beliefs, Mr. Bodnar writes: “In flying over a body of water one can see the submerged bottom showing unevenness of contours, What is really seen on the moon is the earth’s ocean floor with its studded craters and unevenness of the bottom of the ocean with its peaks and possible volcanic action mirrored through the sea.”

“The moon is really attached to the earth through reflection. It can be compared to a dumbbell, with the ball at one end being four times the size of the other. The larger one is the earth, and the smaller end the moon, and the bar holding the two balls together represent the sun’s reflection.”

MR. BODNAR also believes that the tides are caused by the rotation of the earth—not by gravitational pull of the moon.

“If you take 360 degrees which is a full circle and divide it into four quarters, you have 90 degrees for each quarter segment. It takes the earth approximately 24 hours for one revolution, divided by six hours for each 90 degree segment, thus creating low and high tides every six hours caused by the centrifugal action of the earth rotating on its axis. Also the seasons and the actual speed of rotation of the earth on its axis affects the tides.”

And if that’s too complicated to understand, Mr. Bodnar makes it simpler by saying that if you fill a pail full of water and swing it around fast enough, the water won’t spill out.

But if you held the pail of water in a horizontal position the water would spill out, proving, Mr. Bodnar says, that it is the earth’s rotation that prevents the water from spilling.

IN THE COURSE of his studies Mr. Bodnar has arrived at some other startling conclusions.

When John Glenn and other astronauts were launched into space they never really orbited around the earth.

The nose cones remained stationary. It was the earth that did the turning. Our spacemen only had sufficient fuel to guide their capsules for landing, he claims.

HE ALSO STATES that the earth is not spherical but elliptical, shaped like a tomato with both ends cut off.

And finally, to support his contention that the moon is a mirage he asks these puzzling questions:

1—Why is the moon the only heavenly body that is so large, and why is it approximately a quarter of the size of the earth?

And answers: It is because the moon is a reflection of the earth.

2—Russia is supposed to have projected her satellite to the moon in 32 to 36 hours, whereas NASA computes it will take a Ranger 66 to 72 hours. Why the great difference in time?

3—Why does the moon turn and travel with the earth?

And answers: Because it is a reflection.

4—Why is it that the moon looks different to the Russians?

And answers: Because while we see the continents of Asia, Africa, Australia, etc. and etc., the Soviets see the reflections of North and South America.

BODNAR’S exploratory bent is not confined to the realm of more conjecture.

He once wrote to President Kennedy, volunteering to sub for “Ham,” the chimponaut, America’s first space pilot.

But NASA wrote back saying that the chimpanzee was better trained.

“I’ve been laughed at all my life,” Mr. Bodnar reflected ruefully.

MRS. BODNAR, a former R.N. who tirelessly serves as her husband’s secretary in typing up his theories and letters to various officials, is also faithful to his views.

“Most scientists disagree in their finds about the moon.”

“I think my husband’s hypothesis makes just as much sense as theirs.”