Are You a Pharisee? The Definition of a Pharisee Finally Explained

I DIDN’T think it would come to this. You found me out. I was caught. And it’s true—all of it. I pursue Torah obedience. There were rumors afloat but now you’ve heard it here, straight from the horse’s mouth. Must be a Pharisee then. I can’t seem to go anywhere on social media without card-carrying “license to sin” Christians throwing Yahusha’s rebukes downwind, apparently to reveal the error of my ways. You see, the logic is, if Yahusha rebuked the pharisees and I seek to obey Torah (there it is again), then I must be the pharisee whom Yahusha rebuked. Oh dear.

Let me see if I got this right. Yahusha rebuked the pharisees for being “works-based” and keeping the Law, while praising the goyim for being disobedient? Does that just about sum it up? Worst deductive argument ever. But for the moment, let’s roll with the punches and go with it. Rather than simply taking your word for it, or my own, we’ll turn to the gospel of Matthew to see why Yahusha rebuked the Pharisees. As usual, I’ll present the passage, pausing only for comment. Let’s get straight to it then.

15 THEN the scribes and Perushim from Yerushalayim drew near to him, and they said, 2 “Why do your talmidim transgress the Tiqunim of the ancient ones?

Uh-oh. The scribes and Pharisees are arriving from Jerusalem to draw near to Yahusha. Probably up to no good. You will tell me the word ‘talmidim’ is not in your Bible, and why am I promoting the Talmud? Quite the opposite, in fact. Before this is over, you shall see how anyone who promotes disobedience to Torah is in fact the author of their own Talmud. I probably should have explained before we began, we’re reading today from the Hebrew gospel of Matthew, which predates the Greek. If this sound suspicious to you, then I suggest you read along with the Textus Receptus. Oh fine, I’ll do it for you. I’ve lined the Hebrew and Greek gospel up side-by-side. Beginning again.

15 THEN the scribes and Perushim from Yerushalayim drew near to him, and they said, 2 “Why do your talmidim transgress the Tiqunim of the ancient ones?”

15 Then came to Jesus scribes and Pharisees, which were of Jerusalem, saying,

2 Why do thy disciples transgress the tradition of the elders?

You will immediately tell me the Pharisees are protesting Yahusha on the basis that his disciples are transgressing Torah and that Yahusha is okay with it—just as he is okay with you transgressing it, and vice versa, apparently. Time for a rebuking against those “works-based” religious people, it seems. The word ‘Tiqunim’ however simply means a manmade regulation, amendment, or “improvement” to the Torah; something which is not a part of the original commandment of Yahuah. Therefore, the Pharisees cannot possibly be protesting Yahusha for disobeying Torah, as clearly, they’re protesting him for obeying it rather than their own manmade law.

“Why do they not ritually wash their hands when they want to eat?”

…for they wash not their hands when they eat bread.

I can’t find that command anywhere in Torah. Can you? Must be one of those improvements to the Bible then. Continuing.

3 But he answered them and said, “And why do you transgress the commandments of El on account of your decrees?

3 But he answered and said unto them, Why do ye also transgress the commandment of God by your tradition?

In either version, it kind of sounds like Yahusha is rebuking the Pharisees for transgressing the commandments of Elohim to me. Why are they transgressing the Law, exactly? Yahusha doesn’t leave us hanging. Because they have their own tradition which says to do otherwise. Hmmm, sounds familiar. There’s a whole lot of traditions in the Catholic and Christian church which advocates an improvement to and freedom from Torah obedience, but that’s probably just a coincidence. Surely, Yahusha couldn’t possibly be addressing anybody else who advocates the same message as the Pharisees. Perhaps I’m reading this all wrong. Let’s keep at it.

4 For God commanded, saying, Honour thy father and mother: and, He that curseth father or mother, let him die the death.

5 But ye say, Whosoever shall say to his father or his mother, It is a gift, by whatsoever thou mightest be profited by me;

6 And honour not his father or his mother, he shall be free. Thus have ye made the commandment of God of none effect by your tradition.

There it is again. The Pharisees are transgressing the commandments of Yahuah, even going so far as to make them of no effect by their tradition. Seems like I’m picking up a pattern. Wasn’t that a song in Fiddler on the Roof? Tradition, tradition! Tradition! How can anyone claim Yahusha was scolding them for being “works based” when you can’t very well obey your parents unless a work is involved? Contrarily, disobeying one’s parents would make Torah ineffective. Seems legit. I’ve yet to see a concise deductive argument anywhere except one which has Messiah declaring Torah obedience. Perhaps there will be a surprising twist to his conclusion. Read on.

7 Rightly did Yeshayah speak about you, saying, 8 ‘This people, which honors me with words but their heart is far from me, 9 they honor me in vain, imposing your instructions and commandments of men.’”

7 Ye hypocrites, well did Esaias prophesy of you, saying,

9 But in vain they do worship me, teaching for doctrines the commandments of men.

It really doesn’t get any clearer than that. If it is our goal to worship Elohim in vain, then Yahusha tells us how to go about doing it. Listen carefully. “Teach for doctrines the commandments of men.”

Oh dear. He doesn’t leave us a third option, does he? So far, I have only read two options. There is the Torah of Elohim or the Tiqunim of men. Take your pick. One or the other. But you can’t have both. You can devote your entire life to worshiping Jesus while snubbing Torah and think he will be okay with that, but Messiah says otherwise. Here is the passage which Yahusha was quoting from.

13 Wherefore Yahuah said, Forasmuch as this people draw near to me with their mouth, and with their lips do honor me, but have removed their heart far from me, and their fear toward me is taught by the precept of men: 14 Therefore, behold, I will proceed to do a marvelous work among this people, even a marvelous work and a wonder: for the wisdom of their wise men shall perish, and the understanding of their prudent men shall be hid.

Wowzers! Yahusha fell in agreement with the Torah observant prophet Yesha’yahu who, in turn, fell in agreement with Yahuah, the Most-High Elohim. Apparently, Yahusha didn’t come to undo his father’s work after all. Go figure. It says right here what will happen to those who honor Yahuah with their lips while obstinately clinging to the traditions of men. Wisdom shall perish and understanding will be hidden from them. Not good. If you still find yourself in disagreement, then I encourage you to read that again—over and over again if you have to. Fight the indoctrination. Hundreds and thousands of years of man-made doctrine and church tradition. Tradition, tradition! Tradition! Messiah says one thing and your church pastor and the Christian University and billions of Christians and Catholics worldwide, including the cast of Fiddler on the Roof, says another. Think. Whatever happens, don’t let cognitive dissonance win the day. Your journey down the narrow path depends upon it.

Perhaps this is all just a fluke. Maybe I’m just selectively choosing Scripture which only appears to advocate for Yahuah’s instructions in righteous living, you tell me. A pharisee is still defined as a “works-based” Torah observant individual, no matter what this particular passage has to say on the matter. Fine. Then let’s find another confrontation between Yahusha and the pharisees. A second witness, if you will. The same story can be found in the gospel of Mark. This time, I’ll let you read through the entire narrative without breaking for comments.

7 And then there came to Yahusha, some of the Perushim and the wise ones of the old law—who came from Yerushalayim. And when they saw some of his talmidim eating without ritually 2 washing hands, they despised them. 3 (For the Yehudim do not eat unless they always wash the hands ritually, according to the decree of the ancient ones. 4 Also there are many other statutes that they command them to keep. That is, to ritually wash their lids and silver drinking vessels.) 5 And because of this, they asked Yahusha, saying, “Why are your talmidim not keeping the decrees of the ancient fathers, but eat bread with ritually unwashed hands all the day!?”

6 So Yahusha answered, saying to them, “Well did Yeshayah prophesy of you deceivers, saying, ‘This people honor me by word, but their heart is far from me. 7 In vain do they honor me, teaching the instruction and commandments of men.’” 8 (So they forsake the commandments of El, while holding onto whatever was delivered of men, and came to them concerning cups and their silver drinking vessels, and likewise many other things.)

9 And like these words he said to them, “You are breaking the commandments of Yahuah in order to keep your own institutions—10 for Mosheh said, ‘Honor your father and your mother,’ and ‘Whoso curses his father or his mother must certainly die.’ 11 But you say that anything of them which a man vows—because he made a vow, his father and mother should profit him—12 and afterwards you do not allow him to repay the father and mother. 13 Thus, you are breaking the commandments of Yahuah on account of your institutions which you obtained, and many other evils you do.”

In conclusion, a pharisee is someone who obstinately breaks the commands of Elohim and teaches others to do the same in order to honor Yahuah by their own manmade traditions. All lips. No heart. I highlighted each one—all three instances. Just to make absolutely certain that nobody missed it.

Don’t be a pharisee. Pharisees are bad. Declarations of faith and honoring Jesus with our lips are neat in a church service (EDIT: Not really. Flee. Flee from any church who practices this AS FAST AS YOU CAN!!!), but at the end of the day there is only one way to honor Yahuah, the Most-High Elohim, and His Son, Yahusha HaMashiach. With your heart. And that is by keeping His commands. 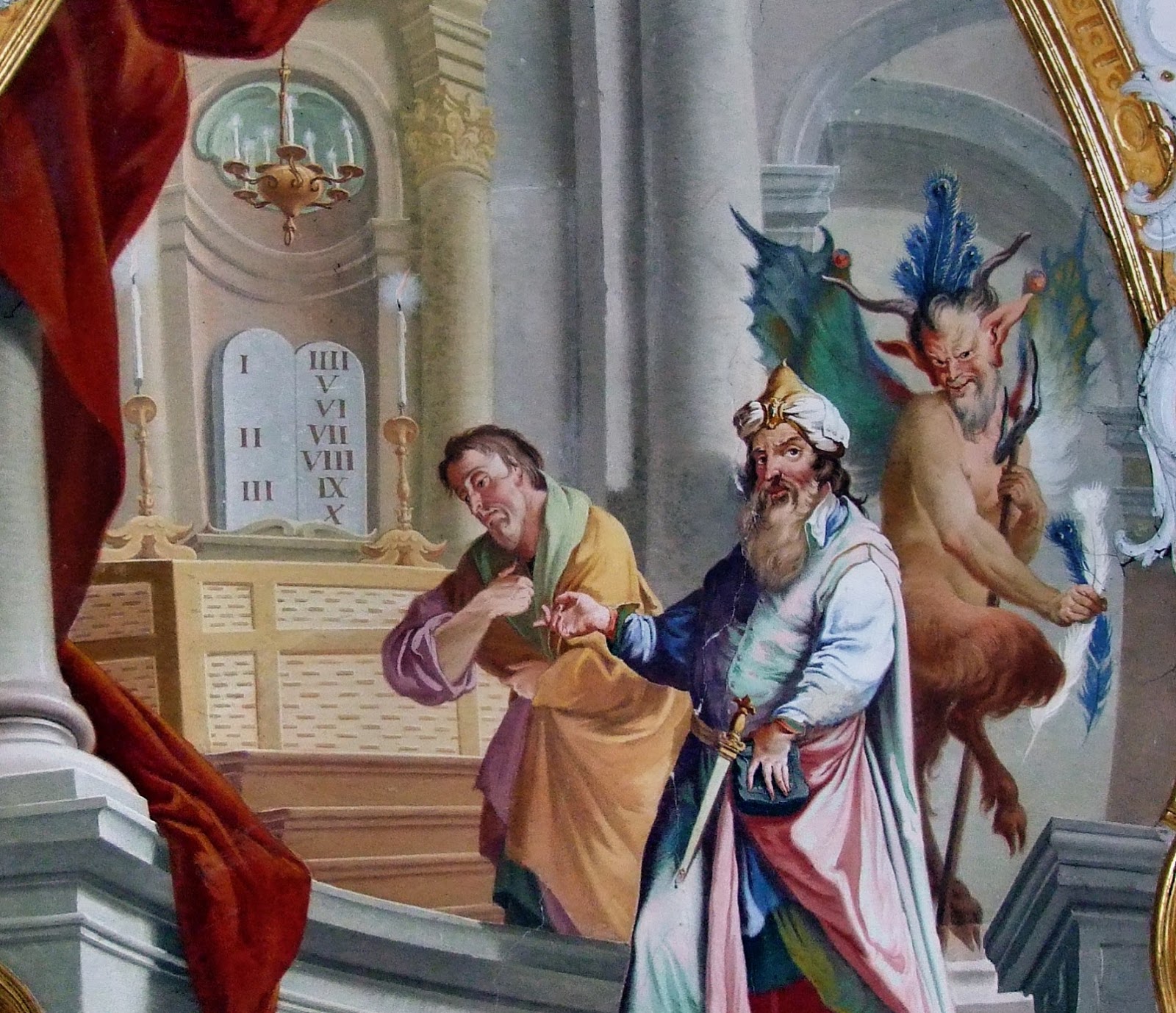