The Molecular Path to Shamanism | Watson, Crick and the Double-Helix Delusion

GENETICIST JAMES WATSON AND FRANCIS CRICK, a molecular biologist, biophysicist, and neuroscientist by trade, conducted no DNA experiments of their own, according to the U.S. National Library of Medicine. And yet in 1953, in the final few years leading up to the space race, they discovered the DNA molecule known as the Double Helix by “drawing upon the experimental results of others” and relying on “brilliant intuition, persistence, and luck.” But there is a missing ingredient here. As the story goes, Francis Crick burst through the front door of his Cambridge home spouting barely-legible gibberish to his wife about “two spirals twisting in opposite directions from one another.” Being herself somewhat of an artist, she put vision to paper. And like Walt Disney with Mickey Mouse, the coiling double helix was promptly born. To celebrate, the couple met up with research partner James Watson, and the trio drunk themselves silly at a local pub. It should be noted that Crick was a devoted fan of author Aldous Huxley. He famously threw nude parties throughout the 1950’s and 60’s. But most importantly of all, Crick was a devoted connoisseur of LSD. 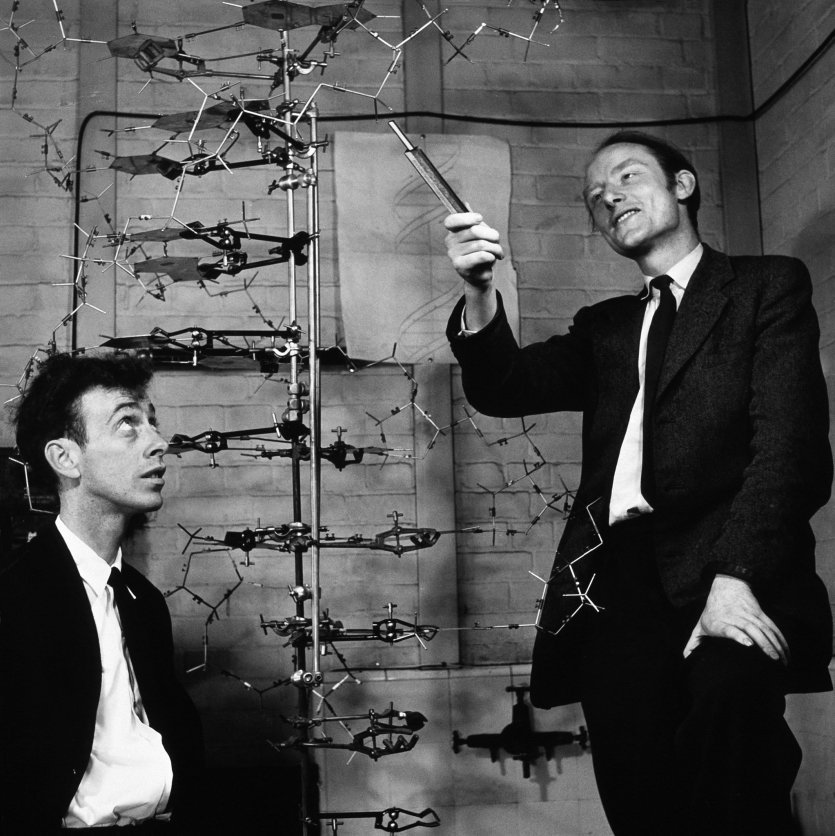 What Francis Crick essentially discovered, ironically enough, is the caduceus—the staff carried by Hermes Trismegistus throughout ancient Greek mythology. One might immediately recognize the caduceus, should he have observed a pair of two intertwined snakes imprinted on ambulances and medical buildings across the world. Though, one needn’t only look there. The twin serpents of the double helix seem to slither frequently throughout the annals of Science, from the subatomic scale to the motions of celestial mechanics and even the coils of entire galaxies. There’s simply no escaping the ancient Serpent.

In Mutants & Mystics: Science Fiction, Superhero Comics, and the Paranormal, author Jeffrey J. Kripal doesn’t mince his words when writing on the oversaturation of the caduceus: “It is at once the double-helix scepter of the DNA molecule, the phallic serpent who brought sex and death into the world in the myth of the Garden of Eden, and a sign of the kundalini, the two-spiraled currents of energy that are likened to a serpent as they spark and spike up, down, and around the central channel of the spinal column in Tantric yoga. Most of all, though, the caduceus is the staff of Hermes, the ancient Greek god of language and, later, occult philosophy, alchemy, and Western magic.”

The staff of Hermes has been a favorite for British comic book writer Alan Moore, who openly advertises the arts in its many varying forms to be deeply rooted in occultism. His comic book series Promethea (1999-2005) was a cauldron for occult philosophy, Jewish mysticism, the Tarot, Tantric yoga, psychedelia, sex magic, and infamous “spheres” of the Kabbalah. Regarding his use of the caduceus, Moore explains: “Magic, after all, is ruled by Hermes, his symbol, this caduceus, its double-helix serpents representing mankind’s evolution. They wind apart, and then recombine, progressing towards their ultimate synthesis—towards winged blazing Godhead.”

Yet Crick’s double-helix discovery ventures even further back than the Olympian who supplied Hermeticism to western civilization. To this the snake-worshiping Chaldeans deserve due-credit. In Babylonian Origin of Hermes, the Snake-God, and of the Caduceus (1916) A.L. Frothingham writes: “The proto-Hermes was always a snake-god, and before the era of complete anthropomorphism he was thought of in snake form. But it is an essential element of his function that he was not a single snake—for the great single Earth Snake was the Mother goddess—but the double snake, male and female, the most prolific form of copulation in the animal kingdom.”

But let’s not forget, the Egyptians also had a part in Crick’s discovery. Did Pharaoh not wear a cobra on his crown as a symbol of the divine word and third eye—the pineal gland—by which true hidden knowledge might be discovered to the initiate? In his book, The Secret in the Bible, author Tony Bushby suggests the capstone of the Great Pyramid was once a clear crystal or glass that produced a visible beacon of light from its apex. To this effect he writes: “Whenever a light is shone down into a glass pyramid in exact scale or proportion as the Great Pyramid, a ‘Rainbow Serpent’ is created. The light provides a type of force or energy that, in turn, creates the vertical spiral of light, a serpent upraised, invisible in rock, but visible in a clear substance. That is what the Ancient Egyptian Priesthood meant when they said, ‘A serpent lies coiled in the Great Pyramid.’” Bushby’s conclusion is as you might now suspect. The Rainbow Serpent, directly referenced by the priesthood, was non-other than Francis Crick’s strand of DNA.

Every continent seems to have a role in ancient serpent worship. Claude Lévi-Strauss writes of the Aztecs: “In Aztec, the word coatl means both ‘serpent’ and ‘twin.’ The name Quetzalcoatl can thus be interpreted either as ‘Plumed serpent’ or ‘Magnificent twin.’” Throughout shamanic religions, from Australia to Tibet and eastern Asia, back into Egypt again, throughout Africa, and finally North and South America, visions of “spiral ladders” or “braided ropes” cannot be overlooked either. Authors Mircea Eliade, Willard R. Trask, and Wendy Doniger write in Shamanism: Archaic Techniques of Ecstasy, “the symbolism of the rope, like that of the ladder, necessarily implies communication between sky and earth. It is by means of a rope or a ladder (as, too, by a vine, a bridge, a chain of arnyaw, etc.) that the gods descend to earth and men go up to the sky.”

In 1961, anthropologist Michael Harner journeyed to the Peruvian Amazon rainforest to study the shamanistic religion of the Conibo Indians. In the Amazon, he encountered a world of hallucination. Upon finally ingesting the hallucinogenic substance, and according to his own account, “giant reptilian creatures” resting “at the lowest depths of his brain” began to project a series of scenes and images before his eyes.

“First they showed me the planet Earth as it was eons ago, before there was any life on it. I saw an ocean, barren land, and a bright blue sky. Then black specks dropped from the sky by the hundreds and landed in front of me on the barren landscape. I could see the ‘specks’ were actually large, shiny, black creatures with stubby pterodactyl-like wings and huge whale-like bodies…. They explained to me in a kind of thought language that they were fleeing from something out in space. They had come to the planet Earth to escape their enemy. The creatures then showed me how they had created life on the planet in order to hide within the multitudinous forms and thus disguise their presence. Before me, the magnificence of plant and animal creation and speciation – hundreds of millions of years of activity – took place on a scale and with a vividness impossible to describe. I learned that the dragon-like creatures were thus inside all forms of life, including man.”

“In retrospect one could say they were almost like DNA, although at that time, 1961, I knew nothing of DNA.”

Author Jeremy Narby also testifies to this bizarre Double-Helix knowledge among the shamans of the Peruvian rainforest when he writes:

“By ritually ingesting mind-altering plant mixtures, Peruvian Amazon shamans take their consciousness down to the molecular level and gain access to biomolecular information.” Elsewhere he states: “The first [plant] contains a hallucinogenic substance, dimethyltryptamine, which also seems to be secreted by the human brain; but this hallucinogen has no effect when swallowed, because a stomach enzyme called monoamine oxidase blocks it. The second plant, however, contains several substances that inactivate this precise stomach enzyme, allowing the hallucinogen to reach the brain. So here are people without electron microscopes who choose, among some 80,000 Amazonian plant species, the leaves of a bush containing a hallucinogenic brain hormone, which they combine with a vine containing substances that inactivate an enzyme of the digestive tract, which would otherwise block the hallucinogenic effect. And they do this to modify their consciousness. It is as if they knew about the molecular properties of plants and the art of combining them, and when one asks them how they know these things, they say their knowledge comes directly from hallucinogenic plants….Most remarkably, what they gain access to is the DNA strand itself, which appears to be conscious and capable of bestowing real knowledge about botany, medicine, culture, and life itself. Nature is minded. Hence the ladders and snakes seen in the shamanic visions and the cosmic serpent creation myths found around the world.”

See, this is what irks me about modern Scientists—their shameless denial. When I had the opportunity to sit down for breakfast at the first annual Flat Earth International Conference in Raleigh, North Carolina, with Professor Danny Faulkner, the resident astronomer at “Answers in Genesis,” I brought up the very role which Hermeticism and the Mystery Schools had in the shaping of western philosophy and the Sciences.

He immediately quipped: “No! No! No!  You have it backwards. Science came first and then the occult twisted and contorted it!”

And yet, in light of what little I’ve written, and so much more which has been left out, I can only conclude the U.S. National Library of Medicine is mocking us when it writes: “The double helix has not only reshaped biology, it has become a cultural icon, represented in sculpture, visual art, jewelry, and toys.”

The double-snake helix thingy, whatever you want to call it, and wherever it is found—from the staff of Hermes to the capstone of Egypt’s Great Pyramid, and not to be overlooked, India’s Kundalini—is a conscious entity, if the occult has a say in it.

And it most certainly does.

Francis Crick was not a fan of the Serpent’s great competitor, the religion of Christianity. Being ever so disdainful towards the Messiah who promised to crush the head of the Beguiler, he once quoted: “I do not respect Christian beliefs. I think they are ridiculous. If we could get rid of them, we could more easily get down to the serious problem of trying to find out what the world is all about.”

“Christianity may be OK between consenting adults in private but should not be taught to young children.”

The man who most certainly explored the doors of perception with LSD and other narcotics would rather indoctrinate our children. Crick was pushing occultism and Freemasonry for the uninitiated.