The Law Came by Moses, BUT Grace and Truth by Jesus Christ…? 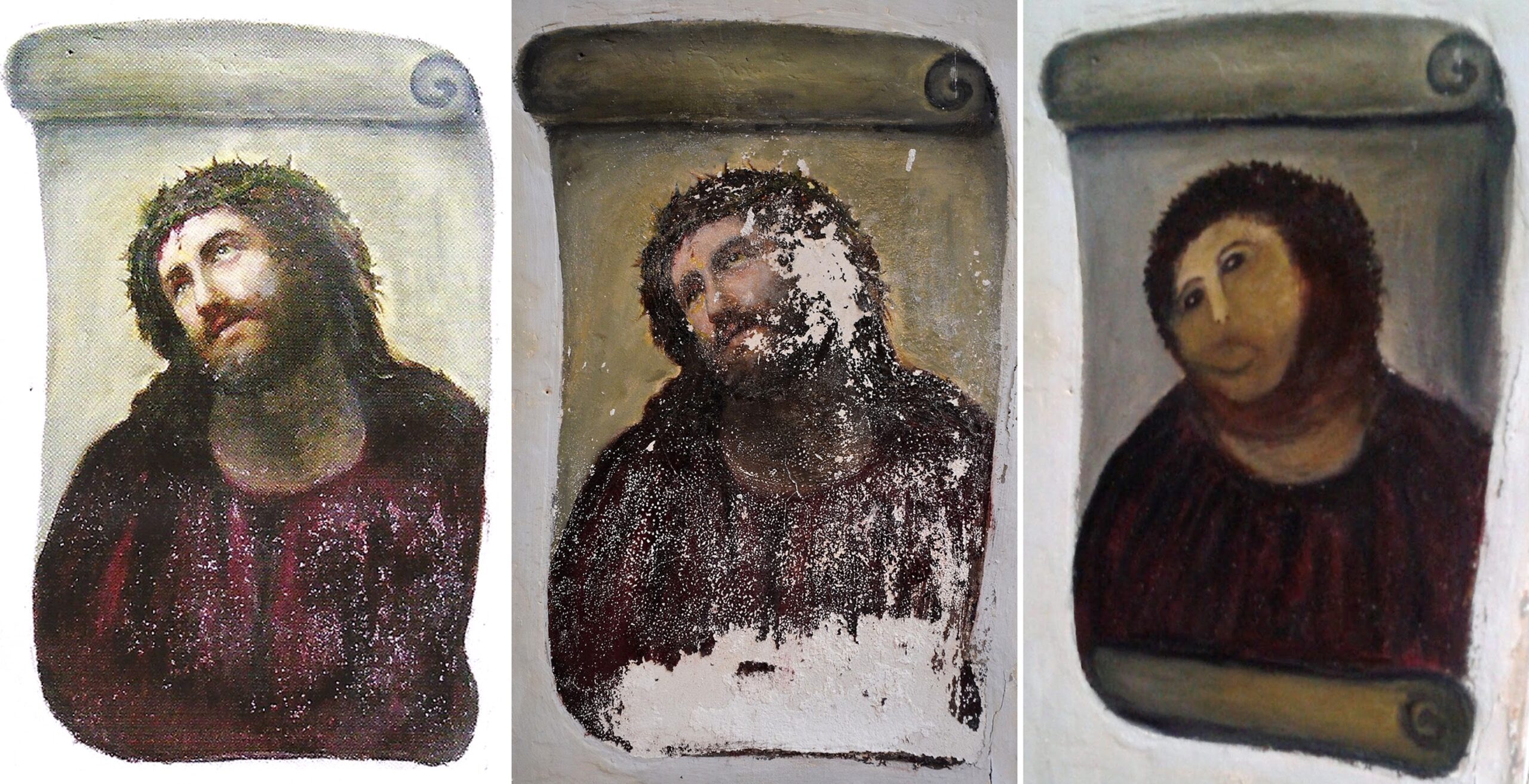 For the law was given by Moses, but grace and truth came by Jesus Christ.

YOU’RE probably wondering why I started out with a portrait of the botched Jesus fresco of Borja, Spain. It happened by accident. I was minding my own business and combing the Intel-net for a portrait of Yahusha. Seeking something which spoke of Truth and grace, just as the disciple describes him in the first chapter of Yochanon, when I happened upon this one. Actually—the portrait dominated my search results. Apparently because Jesus and fresco depictions are synonymous with the restoration processes which they’re cooking up in Spain.

It’s a perfect illustration to the Yochanon passage—is it not? I simply couldn’t help myself. A classically trained dispensationalist has arranged history in such a way that Yahuah, the Most-High Elohiym, often changes his mind, as morality and the plan of salvation goes. All excuses though. In my experience, they will do everything in their power to cling to sin (ditching Sabbath, eating bacon, snubbing the tzitzit, etc.), raising the bar on the bare minimal needed to enter the kingdom while simultaneously accusing anyone who seeks obedience to Yahuah’s instructions in righteous living, via Torah, is spitting on the cross of Christ. How adorable. The expectation and in fact the standard of following Mashiach has become equivalent to certain art restoration projects that we all know and love. The Word of Elohiym no longer recognizable.

Such desperation starts with top brass in Seminary. It flows to the pulpit, and then works its way down the ranks among the plebes into the pews. The indoctrination is such that entire congregations reject doing what our heavenly Father instructed us to do for fear that they will lose their salvation for trying. How that makes any logical sense is beyond me. The complete opposite couldn’t be any truer.

Perhaps you are a dispensationalist and have only arrived to flip the argument around in claiming: “Nuh-uh! Nuh-uh! You’re the fresco, man! Can’t you read? The law was given by Moses, but grace and truth came through Jesus Christ! Recognize reality when it slaps you in the face, man!”

Ah, perfect. That’s the quote from Yochanon which I was earlier telling you about, and the reason why I brought you here. I am reminded of it often. To the Dispensationalist, history is seen very much like the Jesus fresco, but in reverse order—like something out of a Darwinian diagram. Moses brought forth the awful law, whereas grace and truth were only revealed later-on in history. Its guys like me who enjoy digging up a corpse, apparently. Living out those fleshly desires. Because as we all know, sinners just love keeping Torah. Let’s go ahead and read it again, just to see if my comprehension is off.

For the law was given by Moses, but grace and truth came by Jesus Christ.

That’s the King James Version. The decision to employ it was purposeful on my end. Indeed, my reading comprehension is off, but only because the bias of King Jimmy’s translators deemed it so. It took some sleuth skills on my part, but I’ve already found a problem.

The BUT between Moses and Jesus Christ was added in the KJV.

Mm-hmm, you heard me right the first time. But some things deserve repeating. The BUT between Moses and Jesus Christ was added in the KJV. It’s not in the Greek. It’s not in the ‘Codex Vaticanus’, which the KJV only crowd abhors, nor in the ‘Textus Receptus,’ which they claim as inspired. It’s simply not there. That’s a naughty no-no. Translator bias, indeed. Shame—shame—shame, King Jimmy. Some people love their BUTS though, conversationally speaking. They simply can’t get enough of them.

That means even the New International Version manages to stick the landing on this one. I’m as shocked as you are. Here’s what the NIV says. Are you ready for it? Best to hold onto something.

For the law was given through Moses; grace and truth came through Jesus Christ.

No BUT. The translators simply relayed the message as it is. Amazing how the context completely changes with the insertion or, in this case, the absence of one solitary word. The simplest explanation when reading John is that he’s telling us the grace and the truth to be found in and throughout Torah was the Son of Elohiym all along. Does that really surprise anyone though? Even my old sparing partner Sha’ul manages to get it right.

Who hath saved us, and called us with an holy calling, not according to our works, but according to his own purpose and grace, which was given us in Christ Jesus before the world began.

You see. Grace has always existed. Why would the Word of Yahuah wait until a much later dispensation to dispose of it? The answer is: it goes against his character. He wouldn’t. It says that grace was given before the world began. Given to whom—exactly? Well, A’dam and Havah, for starters. But here we see it given to Noach.

But Noah found grace in the eyes of Yahuah.

Also, if Yochanon were attempting to tell us that Truth was introduced only after Moshe, and with the appearance of Yahusha, them am I expected to believe that Yahuah, the Most-High Elohiym of Yashar’el, was not only withholding Truth from his children, but dispensing lies? Ridiculous. Even if that were remotely the case, then you could not possibly have Yahusha show up as the foundation of truth if he were the only begotten Son of the Father of lies. We are already told what the Truth is in the Psalms.

Just a few lines down, we read:

I hate and abhor lying: but your Torah do I love.

The writer of Psalm 119 enjoyed employing a BUT now and then, just so long as it was to expose the liars who simultaneously claim Messiah while demanding that Torah is not to be loved and adored by the set-apart.

Once again, the simplest and most obvious answer is the correct one. Yochanon was referring to that. In fact, the grace and truth which can be found in Torah derived from the Son of Elohiym all along. Nothing new. If you were paying attention, Yah’s righteousness is everlasting. It does not change nor evolve. The House of Yashar’el experienced the same righteous Elohiym as we’re expected today, and vice versa. We see it time and again in the Aramaic Targum. Follow along.

And he shall wash the inwards and his legs with water; and the priest shall offer the whole upon the altar of burnt offering an oblation to be accepted with grace before Yahuah.

And the inwards and his legs he shall wash with water, and the priest shall offer the whole and burn it at the altar of burnt sacrifice; it is an offering to be received with grace before Yahuah.

…he shall take from thence his hand full of the meal and of the best of the oil, with all the frankincense; and the priest shall burn the goodly memorial at the altar, an oblation to be accepted with grace before Yahuah.

And the priest shall separate from the mincha a memorial of praise, and burn it at the altar, an oblation to be accepted with grace before Yahuah.

Everything shown in the Leviticus Targum was a bonus to the Yochanon discussion. There’s a reason though why I shared it. It was simply to demonstrate that the ancients understood grace perfectly well. Yahuah accepted their oblations with grace. Particularly as it pertained to sacrifice.

We’re rearing up now on the conclusion of what I’d hoped from the beginning would be a short paper, and so, this is where it really gets good. I like to eat the icing on my cake last. Hopefully, you do too. We’re five pages in and all out of spoons. We’ll have to dig with our fingers then. Then phrase ‘If it doesn’t get all over the place, then it doesn’t belong in your face’ is probably copyrighted, but I’ll use it anyways.

Here’s what the Hebrew Gospel of Yochanon states:

…for the law was given through Mosheh, truly, grace and truth came through Yeshua Mashiach.

The Hebrew Gospel of Yochanan 1:17

Did you catch that? Yochanan is telling us that truly Yahusha was the Grace and Truth of Torah! I don’t include an exclamation mark very often, but when I do, I’m excited. For whatever reason, the good people who originally translated the gospel of Yochanan into Greek from Hebrew decided to leave out the truly part. The inclusion or exclusion of one solitary word changes the entire context, but you know that already.

Kind of like how Yochanon never said the law was given by Mosheh in the Hebrew. No—read it again. It says through.

By. Through. By Through.

There’s a world of difference between the two, wouldn’t you say so? It’s what I say. The classically trained dispensationalist would have you think the law was given by the fleshly Moshe when in fact he was only the vessel by which the Word of Yahuah delivered the law as an instruction manual for righteous living to his people. That same Word delivered the law, but also grace and truth from the very beginning.

The writer of Hebrews informs us:

Yahusha Messiah is the same yesterday, today, and forever. 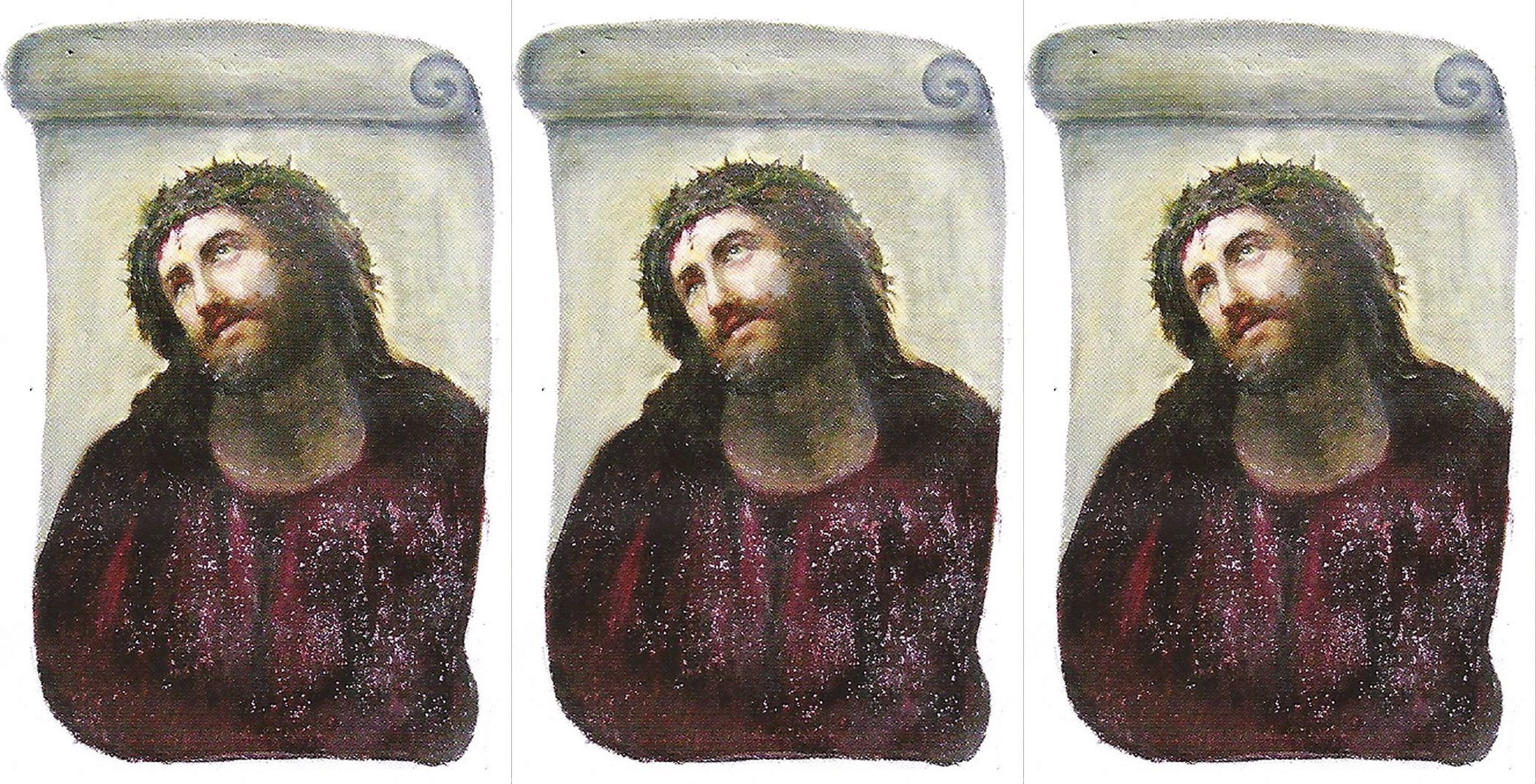