Above Us Only Sky: John Lennon and the Homeless Guy Hoax 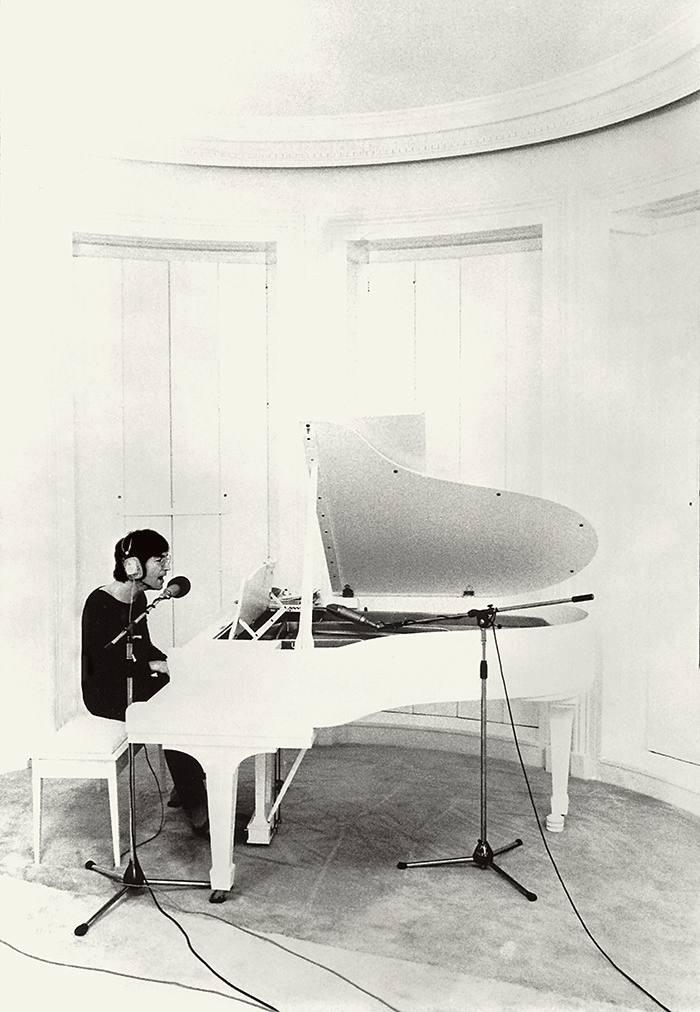 “I don’t believe in Beatles.

I just believe in me. Yoko and me.

The dream is over.”

THE WIFE was away in California visiting her sister and the thought occurred to me to give Netflix the old college try—again. You probably needn’t pull out your deerstalker cap to deduce that I went with John & Yoko: Above Us Only Sky which, as it turns out, is just another re-edit of the original John and Yoko Imagine movie. We are handed additional commentary by its aging actors this time around, half a century later, but no matter how you slice and dice the fifty year-old footage, Yoko Ono still sits around like a creeper in the shadows. Make that his handler. But you probably already knew what I meant.

Look! There’s Yoko. She’s sitting on the floor while John fiddles with his latest arrangement on the white piano. What is she doing? Writing lyrics. Sometimes telling dearest how to properly sing the lyrics she wrote. But most of the time, she’s simply watching. Because John Lennon has been a bad boy, you see, and somebody needs to make sure he’s walking the line proper. And now Yoko is in a bag with a microphone or something. Who the hell knows what she’s really up to. No—not strange at all. You will tell me Yoko Ono was a performance artist and that she was simply performing her latest. She was, indeed. Yoko Ono was waving that wand of hers even when nobody else was watching. Her project was John. As if to erase any of my doubts, we see footage of handler Phil Spector at the controls. Turning knobs. Pushing buttons and stuff.

If you watch the trailer, you’ll see Dan Richter saying: “Those are Yoko’s words. She was speaking through him. The language that you see from John moving forward is Yoko’s language. She taught him this language.” The Wikipedia lists Richter as an American mime and actor. Stanley Kubrick made him personally responsible for choreographing the “Dawn of Man” sequence in 2001: A Space Odyssey, in which Richter played the leader of the ape-men tribe, Moonwatcher. In order to prepare for the part, we are told Richter studied Guy the Gorilla for hours on end at the London Zoo. So, you figure, if anybody knew about mime work and mimicking, it was Richter.

Establishment man Tariq Ali, who has only utilized an entire lifetime attempting to convince you he’s a people’s man and in no way connected with Intel, devotes his screen time in the John and Yoko movie defending Yoko. We then learn that Yoko came from an extraordinary privileged upbringing in Japan—a banking family. Go figure. No wonder the bankers sent the happy little artist to Abbey Road. To keep their investments secure. Perhaps I am just slow at latching onto these things, but it was about when that it finally occurred to me: the entire movie is Yoko Ono propaganda.

THE CHIPS are stacked high this time around. All cards are laid down on the table. Gotta keep the same tiresome illusion coherent, standing erect, and hope to repeatedly have the winning hand decade after decade after decade after decade—or else keep the sheep from noticing. Easy enough. They’ve been doing it since nearly the beginning. What happens when you pull one leg out from under the table? The entire stack of dirty dishes, complete with decades of shlop and dribble, collapses with it, like something of a Domino effect. Remember that homeless guy who shows up at the doorstep of Tittenhurst Park? They replay that footage for the Yoko Ono damage control movie. He arrives again. See what I mean? Domino. If not—you will before we are through.

The original Imagine movie not only starred John and Yoko, it was directed by them too. That’s what the poster reads. Technically, Dan Richter served as director of photography, but John and Yoko are credited as directors. Therefore, we can only assume it was up to Yoko the two of them to decide who was cast into the production. Above Us Only Sky was directed by somebody named Michael Epstein, but you and I know who had a hand in it.

The homeless man is listed on IMDb as a certain Cyrt Claudio. We are told he is appearing as himself, when in fact he is clearly playing, in Richter’s own words, “a shell-shocked Vietnam veteran” who had only recently been released from a hospital in the San Francisco area. Mm-hmm, coming straight to you from the City of Psyop. Perhaps he is one of Colonel Louis West’s hippie actors. The catch here is that Cyrt Claudio thought he was John Lennon while recovering in the hospital, but only half of the time, and wrote Lennon letters regularly declaring the fact. So, we’re going with a Ken Kesey plotline. How many letters do you suppose Lennon received from his fan base? How nice of him to take the time to read Claudio’s and then tell the police to stand down when they wanted to arrest him. John Lennon may have owned a Georgian country mansion on a 72 acre estate in the English countryside, you see, and in little time, a posh multi-million dollar penthouse in the Dakota building, where he stared down upon the locusts of the earth like a god, but he was an organic self-made revolutionary like you and me—and certainly not a CIA project.
Claudio, on the other hand. 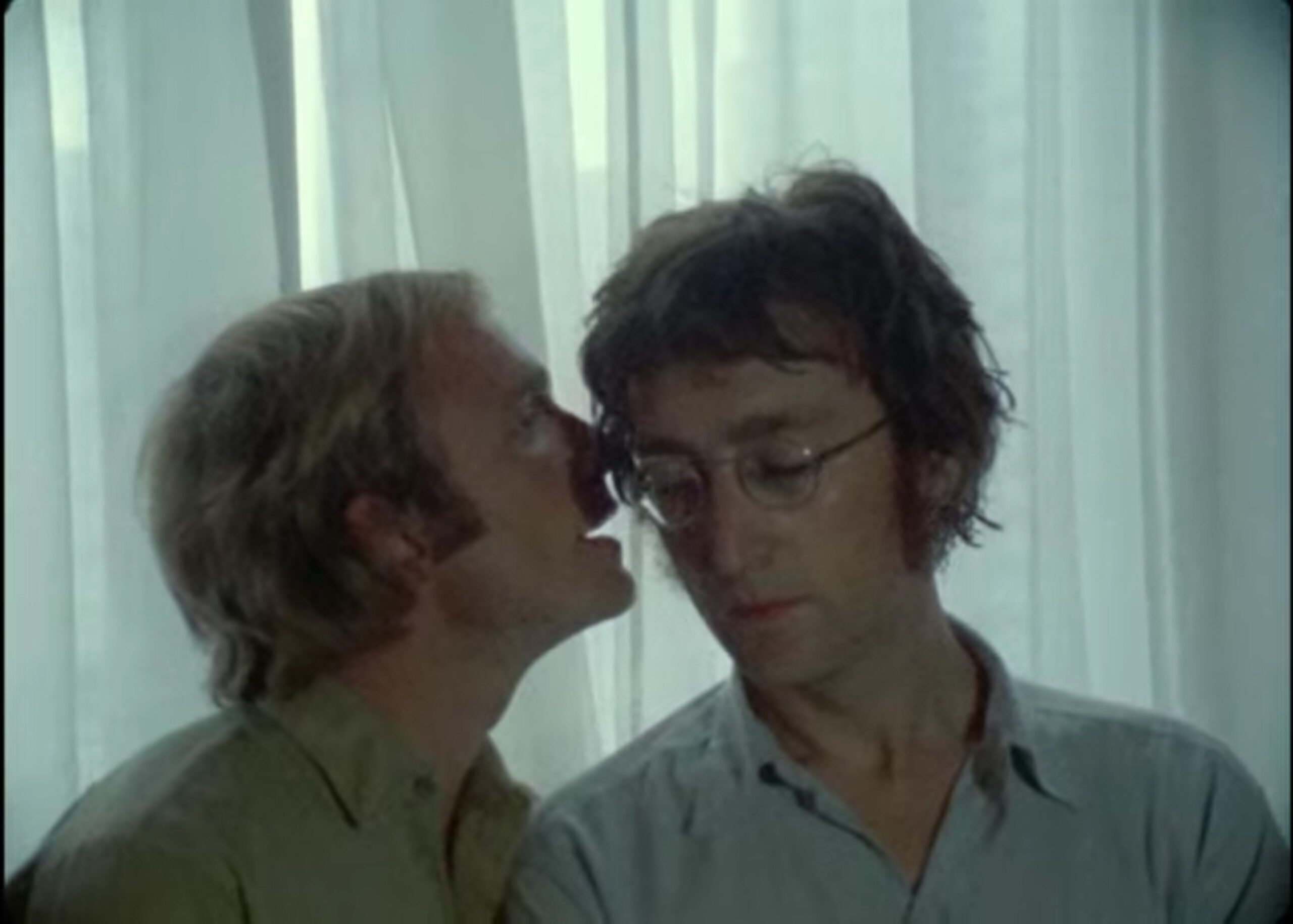 A little later on in the movie, we are treated to a scene in New York City where Yoko whispers into actor Jack Palance’s ear. Jack Palance then whispers into John’s ear. What are they saying? You’d like to know, wouldn’t you? Telling secrets, I shouldn’t wonder. The unutterable kind. Dick Cavett then whispers into John’s ear. What did he whisper? We are not told. The Bobby Kennedy assassination was faked and Sharon Tate lives on, for all I know. But it got me thinking. Didn’t Dick Cavett interview John and Yoko during their filming session for Imagine? They did.

My wife was still in California and I had nothing better to do. Might as well turn to the Intel-net while the Yoko Ono propaganda piece was still fresh in my noggin. I happened to track down the Dick Cavett interview on YouTube and, after watching it from beginning to end, I learned something.

Cyrt Claudio was in the audience.

THE MOMENT happens well over an hour into their interview. Dick Cavett points up to an audience member. It’s question and answer time with John Lennon. Once again, with the camera firmly pressed upon him, Claudio is the one posing the questions. This time he brings up an article he read in Ramparts regarding Lennon being a socialist revolutionary. Gotta promote spook literature, I guess. Also, if he happens to believe he’s John Lennon on this given day, we are not told.

Lennon responds by bringing up Jerry Rubin and Abbie Hoffman of the Chicago Seven. More product placement. He even calls what they’re doing “Theater in court revolution.” Pretty much sums it up, right there. Kind of like the John and Yoko movie or the Dick Cavett show. It’s all theater. He even thinks to mention the Black Panthers. So nice of Lennon, to promote the CIA like that.

Oh, that’s Claudio, alright. Cleans up real nice. Same nose. Same eyes and mouth. Even talks the same. A shower and a blow-dryer at the local Hilton can do wonders to the hair. So voluptuous. I wonder how much his all expense paid vacation from San Francisco to London and then New York set John and Yoko back or if Langley covered the tab.

You’d think John and Yoko would recognize a cast member from their own movie—but no. I’m sure they offered shell-shocked Vietnam veterans interviews all the time at Tittenhurst Park, fresh out of the MK-Ultra cuckoo’s nest. Even when the cameras were off. An entire rotunda of homeless reporters, because that’s the sort of guy that Beatle John really was. Probably couldn’t keep the common folk straight anymore. Can’t really blame him. That—or Claudio was cast as a different character this time around. But that’s probably none of my business.

So much for the old college try. 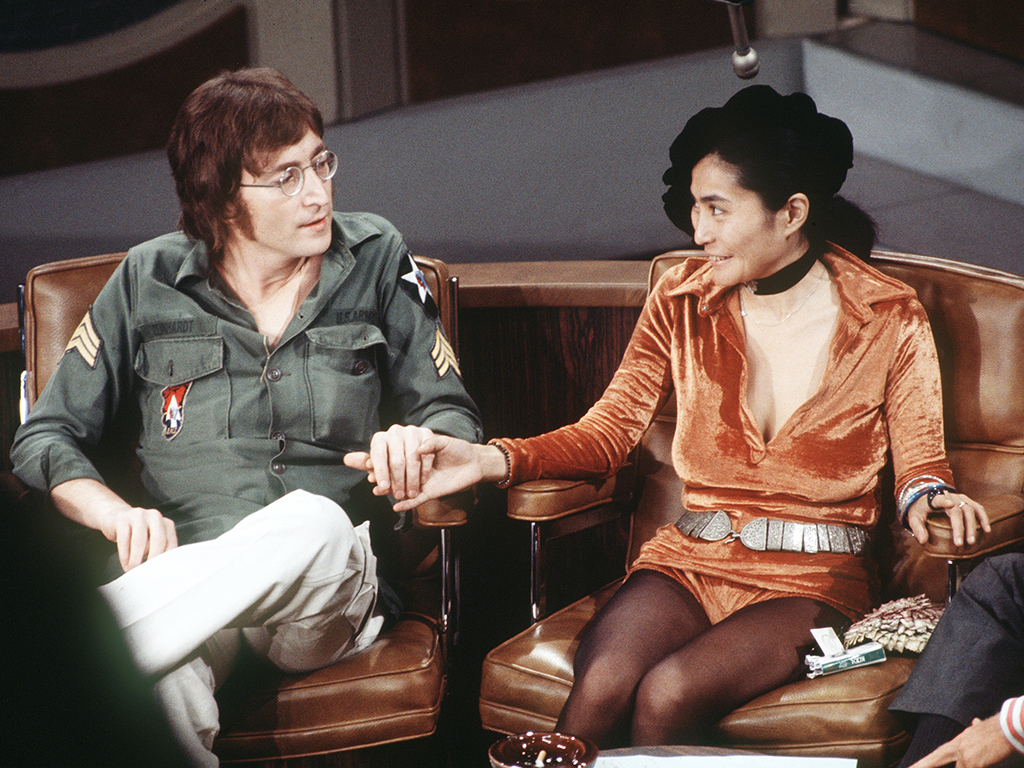