The Flat Earth Society and Daniel Shenton: Obama’s Wrong Side of History

IN 2009 THE FLAT EARTH SOCIETY was quietly re-established with little to no fanfare. Its founder, a man named Daniel Shenton (no proposed relation whatsoever to Samuel Shenton) claimed succession from the Zetetic astronomers, Samuel Rowbotham, and those under the umbrella of the Universal Zetetic Society in 1884, as well as Samuel Shenton’s Flat Earth Research Society, founded in 1956. No mention of the Texan was made. “While the Society’s focus became more religious throughout the 20th Century,” Daniel Shenton wrote, “the Zetetic underpinnings remained intact.” In the 21st century, Shenton assured his new audience, the Flat Earth Society would return to its original scientific focus.

Actually, Daniel Shenton’s Flat Earth Society was unofficially resurrected on a web-based discussion forum five years prior. 2004 is written in my own memory as the year my wife and I, practically penniless, rented a garage in Long Beach, California. Our room had no central heat or air conditioning, not even a bathroom or kitchen; just a bed and an arm chair, two dresser drawers and a desk—leftovers from our adolescence. I had heard somewhere that people, be it only a handful, still believed the world to be flat. There was no sense of mockery on my part as I wrestled against the afternoon heat and powered our computer on from the garage, just pure childlike inquisition and curiosity.

I wanted to know—

—and yet learned little to nothing at all.

Among Daniel Shenton’s rectangle-shaped boxes of discussion I undressed an uninvolved, uninspired earth, lacking any hope of intimacy. Nothing religious, let alone Biblical, came to my attention. Observable science seemed completely absent from the discussion. It wasn’t even practical. Dare I say, Daniel Shenton and whomever he was engaged with in discussion seemed bored. Alas, I thought, the flat earth wasn’t for dimwits, and it certainly wasn’t for pragmatic thinkers. The flat earth, or so I thought at the time, must be deeply esoteric—and boring. And so I left Daniel Shenton’s conversation disappointed. I wanted to know. It is a meddlesomeness which I never forgot, and even then promised to revisit at a later time, perhaps when I’d finally attuned my own sensibilities with Gnostic thinking. And yet the flat earth would be completely neglected for another decade.

This may or may not be of interest to my reader to note that Daniel Shenton’s Flat Earth Society was formally founded during the very first year of Barack Hussein Obama’s two-term administration as president of the United States. The former U.S. President anxiously referred to it, once famously articulating: “We don’t have time for a meeting of the Flat Earth Society!”

No—President Obama did not have time. This is perhaps due to the fact that he was too busy committing war crimes against people. And killing people he did. Despite candidate Obama’s pledge to sweep away Bush’s entanglement in Iraq and Afghanistan, no other US President fulfilled the unexpected legacy of two full terms at war. He is the very definition of a wartime president, and unlike his predecessor, Obama’s killing rampage was spread worldwide. During his final year in office alone, a stunning grand finale of 26,171 bombs were dropped—that would be 72 per day—and US special operations were active in 70% of the world’s nations, totaling 138 countries—a 130% increase over the Bush administration.

While filling in the breadth of two bloody-terms, thousands of innocent civilians were murdered, a total number which will likely forever remain unknown, and nearly 3 million people were deported from US shores. Though his successor would ramp up the rhetoric, where was the liberal outrage then? Even the ex-Nobel Secretary, Geir Lundestad, regretted Obama’s peace prize. “No Nobel Peace Prize ever elicited more attention than the 2009 prize to Barack Obama,” he wrote in his memoir, Secretary of Peace. He added, “Even many of Obama’s supporters believed that the prize was a mistake. In that sense the committee didn’t achieve what it had hoped for.” Indeed, the man who promised peace set the world ablaze. The Iran nuclear deal and the opening of diplomatic relations with Cuba stand alone as President Obama’s successful uses of diplomacy over hostility. Even Iran is criticized as a terrible farce. And history—true history, if permitted to be written—will alone be the judge as to his and Senator John McCain’s full participation in the formation and further strengthening of ISIS, unlike what we are currently led to believe among the gatekeepers of our media.

To the liberal, Barack Hussein Obama was painted as a reluctant warrior—a dove of peace; when in fact he was an iron-clad eagle of war with both talons spread.

Obama’s embrace of drones has led to a preference for killing rather than capturing terrorists. And killing, such machines are certainly proficient at. Not only have women and children been slaughtered as part of its collateral damage package, but young men of military age who the Obama administration preemptively counts as combatants—they too became acceptable moving targets in his worldwide hunting grounds. After condemning Bush for detaining terrorists in Guantanamo, he upped the ante by not only keeping the prison open, but terminating people worldwide without trial.

I suppose if you’re going to run an Empire, you’re going to commit war crimes. Certainly not an excuse, but it’s impossible not to, seeing as how America is an Empire on par with Rome, unless your Calvin Coolidge and you like to sleep by the fishing pole. Barack Hussein Obama liked golf nearly so much as he salivated over the thought of dropping bombs, and he liked to hit his targets. Perhaps that’s why, when it came to committing the deed, the White House Situation Room employed the use of a polar azimuthal equidistant map.

That would be the most popularized flat earth map. 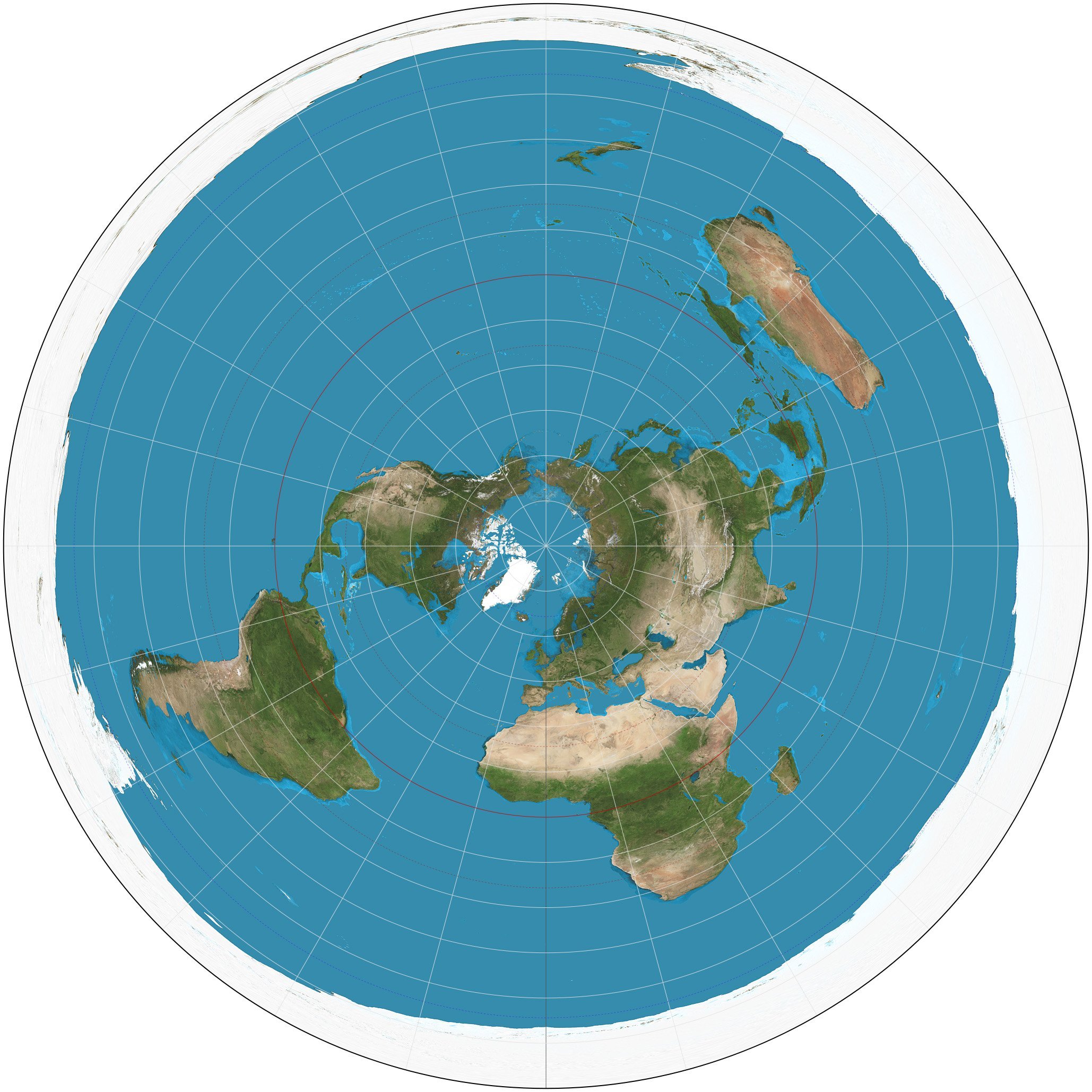 According to the United States Geological Survey (USGS), a polar azimuthal equidistant map is accurate in displaying continents and oceans. Globe maps, oddly enough, are not—particularly where air and aquatic navigation is concerned. To this day the equidistant flat earth map is employed for such purposes—air and sea perfection; or in the case of the Obama administration, for dropping bombs. And yet the USGS enforces a disclaimer that the equidistant map is only reliable for measuring a precise distance from the North Pole to any other longitude-latitude line on the map. Contrarily, many seafarers—braving the Southern Hemisphere—have been tormented, delayed, and even pronounced unexplainably off course for grossly miscalculating Antarctica’s size, and the distance between outstretched continents in that hemisphere, when calculating their course on globe maps. As many flat earth proponents know, the equidistant map has issues, as does any map, and yet retains a certain reliability. And the government, despite filling every classroom with a globe—which is completely useless for any sort of navigational purpose except to fill the child’s mind with superstition regarding a plight from Earth, which will never happen—knows this too.

It is difficult for most people to understand the layout of the flat earth, and are largely incapable of committing themselves to further research on the Zetetics, because since they days of the diaper they have opened up their mouths and said, “Ahhhhh!” for the magic choo-choo as Plato’s globe was spoon-fed into them. Those who are incapable of getting off the magic choo-choo at the next stop will find themselves laughing right along with Scientism’s prominent enforcer and children’s actor Bill Nye the Science Guy, who uses his apparent scientific prestige to deceive globe proponents with psy-op fabricated falsities by mockingly telling flat earthists to “drive to the edge and take pictures” as proof.

It is a shame that Bill Nye the Science Guy, during his White House visits, never once asked President Obama if he could tour the Situation Room, just so that he could better acquaint himself with a polar azimuthal equidistant map—sufficient at least for aerial missions, deploying troops, and dropping bombs.

Among his unprecedented wars and killing sprees, I am reminded that Obama spoke of being on the right side or wrong side of history more than any other U.S. President. “History will end up recording that at every juncture,” Obama claimed regarding his administrative actions in the Middle-East, “we were on the right side of history.” Did you hear that—at every juncture? It seems Obama is a moral man. He knows much about it—future history, that is; who is on the right and who is on the wrong side.

But I guess I can’t take it too personal, kind of like when he accused ‘climate change’ skeptics of believing, with “the melting of the ice and the rise of sea level, all that extra water is just going to spill over the sides of a flat earth.”

I can’t take it too personal, because he also would know something about that, wouldn’t he—those who are on his wrong side of history—particularly since he would be intimately familiar with the equidistant map in the Situation Room, or the UN logo, for that matter, having set his mind upon one or the other repeatedly, and undoubtedly sat in on some of the killings.

In fact, ten years after its re-emergence, the world has yet to hear from the Flat Earth Society.