WHAT HAPPENS WHEN A TERRIBLE COOK DOUSES HER STEW with too much pepper? Well, if it has anything to do with projected geometry, particularly Lewis Carroll’s distrust of it, and the narrative unfolds in Wonderland, we follow such action to its logical conclusion. Let’s observe. Everyone in the room sneezes, except for the Cheshire Cat. But more importantly, the baby turns into a pig, naturally. This certainly doesn’t seem to surprise the Cheshire Cat at all. As Master of Ceremonies to the unfolding madness, his simple and conclusively apathetic reply to a very perturbed Alice, we might assume, leads us to the very voice of Carroll himself when he speaks from behind his crescent-shaped grin. Carroll, I mean, the Cheshire Cat concludes:

“I thought it would.”

French mathematician Jean-Victor Poncelet (1788-1867) served as an army lieutenant in the Corps of Military Engineers. Actually, Poncelet took part in Napoleon’s invasion of Russia. That was in 1812 when, at the Battle of Krasnoi, he was left for dead. Despite interrogation by General Mikhail Andreyevich Miloradovich, the mathematician disclosed no private information. It was during his imprisonment over the next two years when he wrote his most notable work, “Traité des propriétés projectives des figures,” which outlined the foundations of projective geometry.

Projective geometry examines the properties of figures that stay the same even when that figure is projected onto another surface. A basic precept is that projective space has more points than Euclidean space for any given dimension. Therefore, geometric transformations are permitted which mutate Euclidean points to its counterpart “extra” points, and vice versa. Accordingly, it is possible to assign meanings to the terms “point” and “line” in such a way that they satisfy the first four postulates but not the parallel postulate. Poncelet describes his theory as follows: “Let a figure be conceived to undergo a certain continuous variation, and let some general property concerning it be granted as true, so long as the variation is confined within certain limits; then the same property will belong to all the successive states of the figure.” At any rate, if Wonderland is a series of ridiculous notions and academic grudges, then Poncelet’s geometry made Carroll’s hit list. It’s a notion that the Euclidean math tutor found ridiculous.

The scene in question plays out like this. Alice enters the house of a Duchess who is doing a terrible job of nursing a baby. It howls inconsolably. The cook is doing a terrible job too. Smoke fills the kitchen. The pepper is causing everyone but the Cheshire Cat to sneeze. Frustrated beyond her own limitations, the Duchess violently tosses the baby through the air so that Alice must catch it, which causes the seven year-old Euclidean to ruminate silently among herself: ‘If I don’t take this child away with me, they’re sure to kill it in a day or two: wouldn’t it be murder to leave it behind?’ This of course comes after the cook begins throwing everything within her reach at the Duchess and her baby. “The fire-irons came first; then followed a shower of saucepans, plates, and dishes.” If Alice were to conclude that everyone in the house is preforming terribly, which she most certainly does, then she would be correct.

It has already been established by this point that Alice has left the world of plane Euclidean geometry behind. Here Projective Geometry is free to perform its theatrics. With Euclid, railroad tracks will never meet. But with projective, at some point in the infinity of our horizon they will. With infinity there is no distance. Parallel lines may be free to wander—so to speak; just as an imaginative mind has room to wander. “The case of two intersecting circles is perhaps the simplest example to consider,” writes Melanie Bayley. “Solve their equations, and you will find that they intersect at two distinct points. According to the principle of continuity, any continuous transformation to these circles— moving their centres away from one another, for example—will preserve the basic property that they intersect at two points. It’s just that when their centres are far enough apart the solution will involve an imaginary number that can’t be understood physically.” 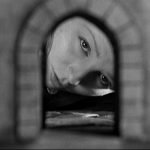 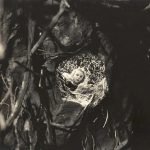 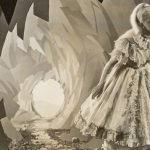 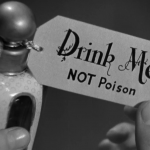 “The principle of continuity,” Melanie Bayley continues, is “a bizarre concept from projective geometry, which was introduced in the mid-19th century from France.” That would be mathematician Jean-Victor Poncelet. “This principle (now an important aspect of modern topology) involves the idea that one shape can bend and stretch into another, provided it retains the same basic properties — a circle is the same as an ellipse or a parabola (the curve of the Cheshire cat’s grin). Taking the notion to its extreme, what works for a circle should also work for a baby. So, when Alice takes the Duchess’s baby outside, it turns into a pig.”

The reader of Carroll’s work will immediately notice that the baby and the pig essentially keeps its same basic original features, as any theoretical object going through a continuous transformation must. Carroll writes: “Alice caught the baby with some difficulty, as it was a queer-shaped little creature, and held out its arms and legs in all directions, ‘just like a star-fish,’ thought Alice.” Like the Duchess herself, a caricature likely based off of sixteenth-century Flemish artist Quentin Matsys painting of the fourteenth-century Duchess Margaret of Carinthia and Tyrol—she had the reputation of being the ugliest woman in history, and Matsys’ portrait is titled “The Ugly Duchess,” appropriately—Alice notes that the baby is somewhat homely in and of itself. It has a queer shape, turned-up nose and small eyes. Alice only realizes the transformation when its howling sneezes turn to grunts.

What follows between Alice and the Cheshire Cat is perhaps one of the most popular exchanges in the entire history of literature. Wonderland’s Master of Ceremony has witnessed the baby’s untidy transformation into a pig from the branch of a tree, naturally, and the short transaction of words to follow may best describe Carroll’s personal frustration towards the maddening rush of his academic contemporaries away from a solid reality-based Euclidean construct to the abstraction of Post-Cartesian mathematics.

Cat: “Where are you going?”

Alice: “Which way should I go?”

Cat: “That depends on where you are going.”

Cat: “Then it doesn’t matter which way you go.”