One World Order & the Grand Initiation (Alchemy of the Mind)

mark of the beast | New Age | psychodrama | The Mystery Religion

Let’s pull back the curtain and take a peek. If the world worked merely on personal merit, then George W. Bush would have been a shoe salesman in Foot Locker rather than a two-time frat boy of both Yale and Harvard University. No offense to shoe salesmen. But when it comes to Elite society and Big Daddy, the world doesn’t work that way. They made him president. The fact that he fumbled through so many press conferences, and probably even had somebody reading into his ear, didn’t even matter. He had Big Daddy and Big Daddy had a face to work with, and they needed an actor for 9/11, even if he was a terrible one.

Back in the day, the mob ran street-front florist shops in order to distract their customers from back alley dealings, often secured with a handshake and a body in the trunk.

It’s crazy when you finally get to the point where you can look at the world around you and realize celebrity faces are mostly just spooks masquerading under the guise of free enterprise, just like the mobster who has a peculiar love of flower arrangements.

Elon Musk, the face for Tesla and SpaceX.

Zuckerberg, the face for the social media project, Facebook.

Jobs, the face of Apple.

Gates, the face of Microsoft.

And Bezos, the face of Amazon.

I keep going up and down my news feed seeing people attempt to reassure themselves, “Oh, this is sooooooo unconstitutional! We’re American! We have riiiiiiii-ghts!”

Scroll a little further and:

That’s good. You’ve begun to open your eyes to the reality of the One World Order. The light stings, doesn’t it? Now open them a little wider.

The constitution is dead. The Bill of Rights is dead. The United States of America is a failed corporation and it’s been completely taken over. You have no rights. All that food you’ve stockpiled—it doesn’t belong to you anymore. When Gal Gadot opened up this quarantine a month ago by leading Hollywood in a social distancing version of John Lennon’s Imagine, they weren’t joking around.

No hell below us. No religion. No possessions. Nothing to kill or die for. Above us only sky.

Welcome to the One World Order.

They don’t want you to wake up. Why—you ask? Because this is a PSYCHODRAMA. It’s a magical ceremony. Performance witchcraft. They need you to BELIEVE. Everything the One World Order promises, including the CURE to an imagined problem—the invisible enemy that lives within each one of us—is a FALSE HOPE. A false Messiah. This is all about veiling the kingdom of darkness, turning our eyes away from the kingdom of heaven to the FALSE HOPE of the BEAST, and ultimately to the one who masquerades himself as an angel of light. 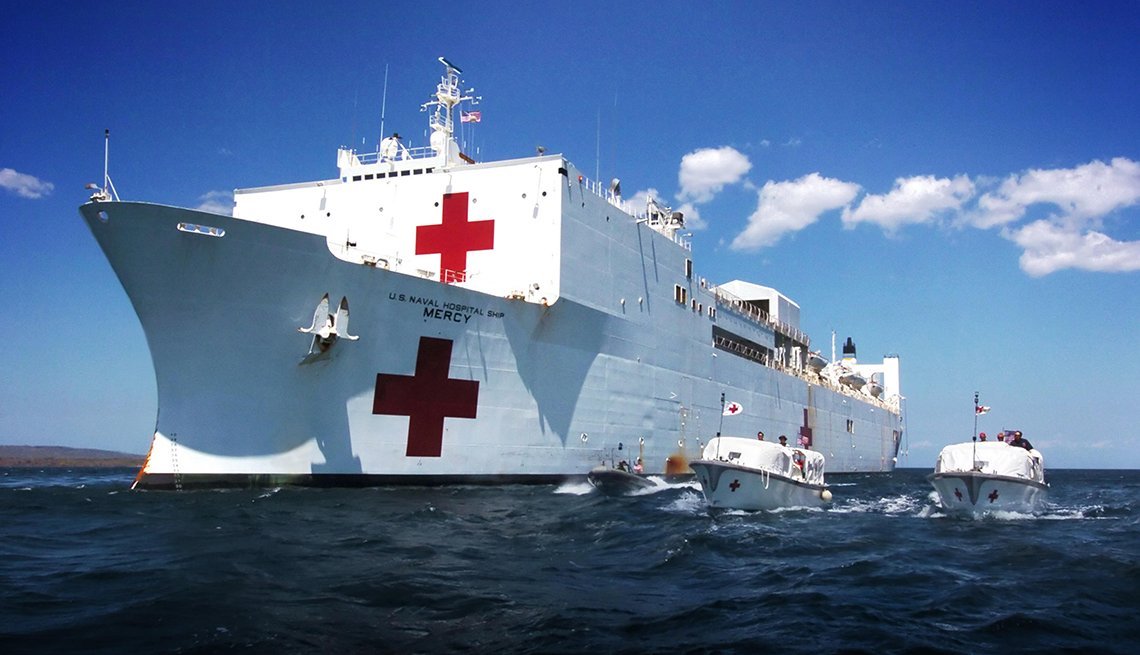 Consider the following. The very moment they unleashed this decades-old “planned” demic, they brought Red Cross “Templar” ships to the east and west coast. New York and Los Angeles. Comfort and Mercy. Two pillars. These are the very doorways to initiation. Paired together, they’re modeled after the two pillars of Solomon’s temple, aptly named Jachin and Boaz in 2 Chronicles 17, and figure prominently in Freemasonry as the entrance-way to the divine. The pillars likewise represent the sun and the moon, or strength and wisdom, though a third pillar, harmony, denotes the Tree of Life, the Jewish mystical symbol of Kabbalah.

Thus, when the candidate passes between the two, he plays the part of the third pillar and partakes in the fruits of the tree by becoming harmony.

That’s us. We’re the third pillar.

Think “alchemy.” The phoenix. You know, out of the ashes…..

I have stated this over and over again. So, please pay attention. The end game is to INITIATE everyone. This is all about awaking the divine within. Christ consciousness. The Mark. And believe me, it’s coming.

But in order to pull this off, they presently need us to BELIEVE in the mantra: “STAY HOME. SAVE LIVES.”

BELIEVE HARDER…..!! THERE’S NOT ENOUGH MAGIC IN THE X-MASS METER!!!

And if you don’t believe, WE HAVE POLICE WHO’LL ARREST YOU!

Do not, and I repeat DO NOT feed the BEAST by placing your faith in a FALSE HOPE. Peace and safety. Every time another person wakes up to the thinly veiled reality of the kingdom of darkness, the spell weakens. And the only way to do this is by becoming a son of Elohim—a warrior for the MOST HIGH.

Put your faith in YAHUAH, the Most-High Elohim, and His only begotten Son, Yahusha (Yeshua), our High Priest and King.

He’s coming for his own.

And I don’t know about you guys, but when Yeshua returns, I hope he looks down upon me and sees a loyal servant who’s still fully dressed for battle, perhaps weary and gasping for another day of breath, but never-the-less wearing the full armor of Elohim.

YAHUAH will be with us until the end.