Job and Jethro, Moses’ Father in law, Are the Same Person

PROBABLY HAVING never considered such a thing before, you may be saying, ‘But…’

Well, allow me to preemptively say that I have no definitive proof that this is so, just a good amount of circumstantial evidence. I cannot say for certain that Job is Jethro, but I can say that it certainly is a possibility which I hope to demonstrate.

The first ‘But…’ that came to your mind is probably, ‘But Job lived way before the time of the Exodus and Moses.’

According to whom exactly? Not the text.

While we do not have any reference to ‘The first year of king such and such’ at the beginning of the story to date the Book of Job, we are given enough information within the text to determine roughly when it took place. It was not before the flood. It was not before Abraham. It was in fact at the time of the Exodus and Moses. 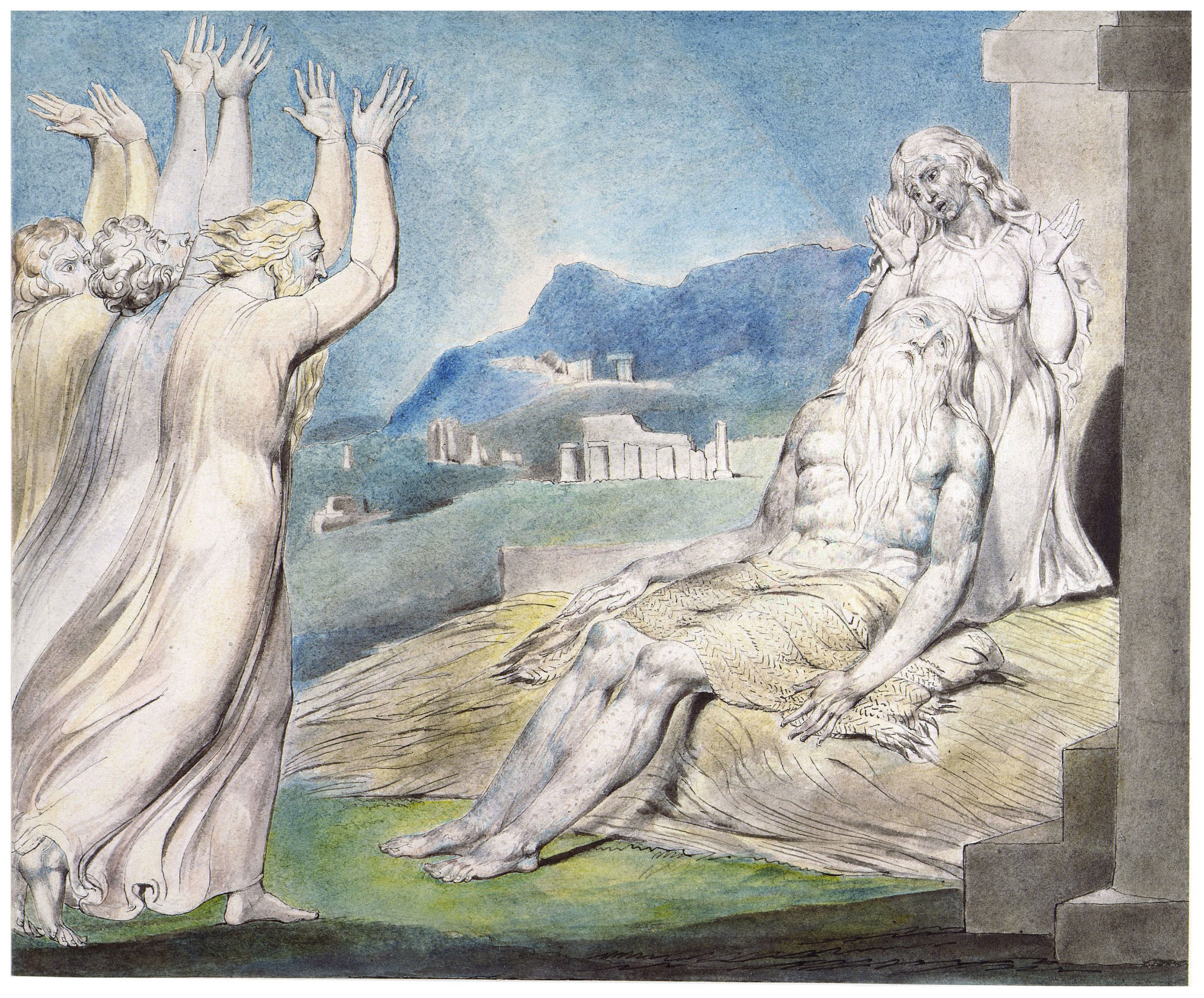 DATING JOB BASED UPON THE MASORETIC TEXT

Job has three friends who come to console/rebuke him during his trial. Zophar the Naamathite. Bildad the Shuhite. And Eliphaz the Temanite (Job 2:11). A whole lot can be decided from the lineage of these people in helping to date the man Job.

Zophar the Naamathite. Naamah is the daughter of Lamech who lived pre-flood (Genesis 4:22). Her name carried through the deluge, as we see it identified with a town in the land of Caanan, given to tribe of Judah (Joshua 15:41).

So, Zophar was either a direct descendant of Lamech’s daughter Naamah (through one of the four women on the ark), or he lived in the city of Nammah. If this were all the information we were given to date Job, then we could say little more than he lived sometime after Lamech.

But we have his next friend Bildad the Shuhite. There are two people named Shuah in the scripture. The first is the son of Abraham by his wife Keturah (Genesis 25:1-2). The second Shuah mentioned in scripture is the Caananite father of the first wife of Judah (Genesis 38:2). I tend to lean toward the Shuhites being the children of the son of Abraham rather than the Caananite, but either works for our purpose of dating the man Job to after Abraham. But there is one more friend to look at.

Eliphaz the Temanite. Teman is a rather famous name scripturally, being referenced by five prophets as a land destined for destruction. There is only one person with that name and that is the son of Eliphaz, the son of Esau (Genesis 36:11).

This is the genealogy of Teman: Abraham, Isaac, Esau, Eliphaz, Teman. So, in order for this man Eliphaz, the friend of Job, to be called a ‘Temanite,’ Teman must first logically have been born. This dates the man Job to at least four generations after Abraham.

There is one more person who has lineage mentioned in the text and that is Elihu the Buzite. Buz is the son of Nahor, Abraham’s brother (Genesis 22:20-21). This is of little help as we have shown Job to be many generations after this. But there is one more bit of information given about Elihu of the kindred of Ram (Job 32:2). Ram is the son of Hezron, the son of Pharez, the son of Judah (Ruth 4:19). Again, logically Ram must have been born in order for his name to be known so that this man Elihu could be identified as one of his kindred. Putting this into our genealogy tree below this is what we get.

So, Ram and Moses were contemporaries. We find further evidence as Ram had two descendants of note. Amminadab, whose daughter was taken by Aaron to wife (Exodus 6:23), and Nahshon, prince of the children of Judah (1Chronicles 2:10) during the Exodus and of the generation that died in the wilderness.

Looking with clear eyes at all this information, it is obvious that the man Job lived contemporary to Moses. There is a second witness as to when Job lived, but first we should find where he lived. 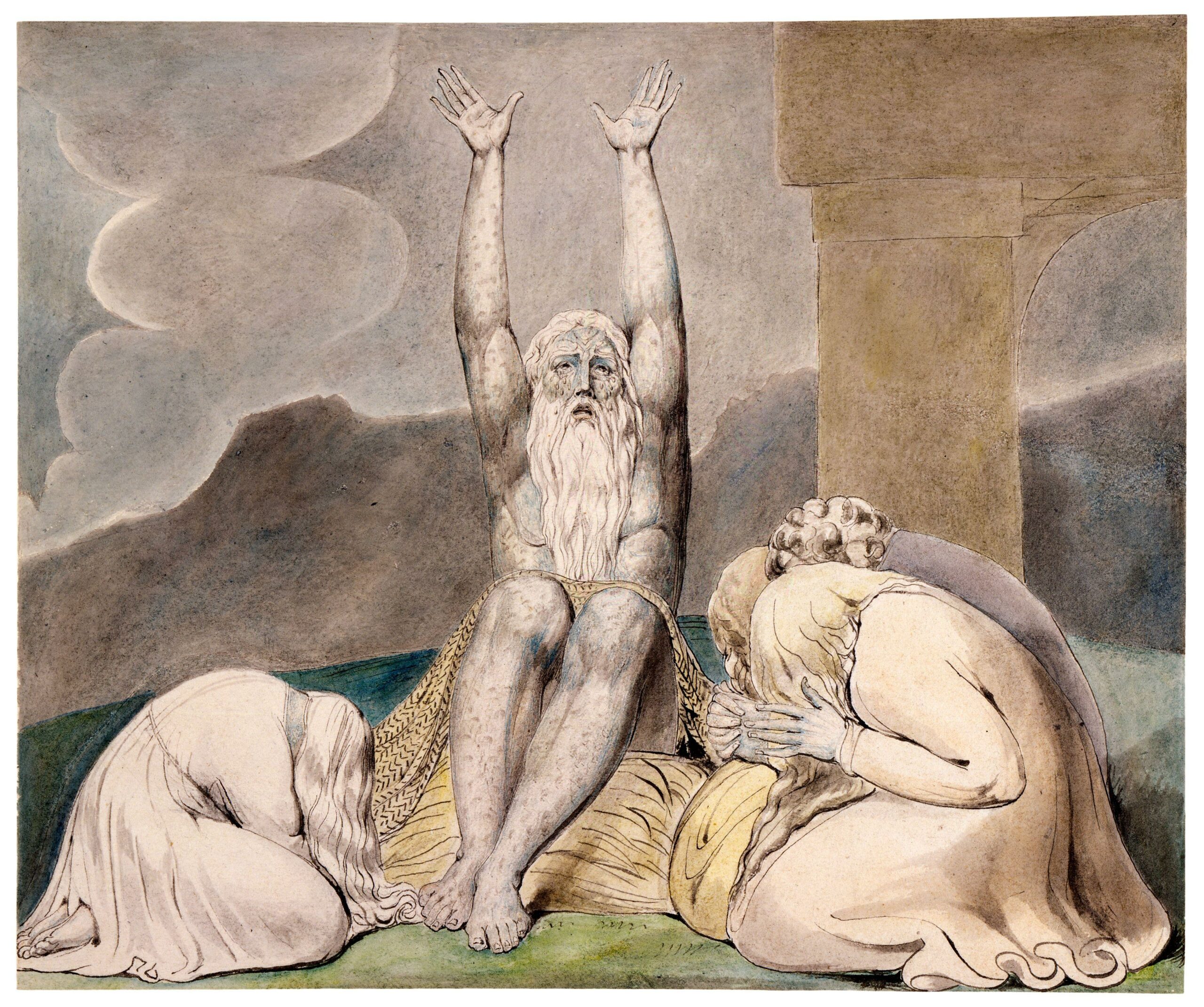 LOCATING THE LAND OF UZ

There was a man in the land of Uz, whose name was Job

The land of Uz is only mentioned twice more in scripture and only once giving it a meaningful designation.

O daughter of Edom, that dwellest in the land of Uz

So, Edomites dwelt in Uz. This then is the same place the congregation would have been in the wilderness. Consider the following:

And they journeyed from mount Hor by the way of the Red sea, to compass the land of Edom…

…on the shore of the Red sea, in the land of Edom.

And he said, Which way shall we go up? And he answered, The way through the wilderness of Edom.

Job is an Edomite based on where he lived and this is confirmed in the second witness below.

DATING AND IDENTIFYING JOB BASED UPON THE SEPTUAGINT

This man [Job] is described in the Syriac book as living in the land of Ausis, on the borders of Idumea and Arabia: and his name before was Jobab; and having taken an Arabian wife, he begot a son whose name was Ennon. And he himself was the son of his father Zare, one of the sons of Esau, and of his mother Bosorrha, so that he was the fifth from Abraam.

Interesting. Does the Masoretic confirm this?

These are the names of Esau’s sons … Reuel …

And these are the sons of Reuel … Zerah …

…and Jobab the son of Zerah of Bozrah …

Not only does the Masoretic confirm his name as Jobab, but his lineage and also his mother are exactly as mentioned in the Septuagint. Putting this information as to who Job/Jobab is and when he lived, we get this genealogy tree.

Jobab would have been born one generation prior to Moses, so the correct age to be his father in law, but more on that later.

After this lived Job an hundred and forty years.

‘After this‘ meaning ‘after everything we just read in the text.’ That is, he lived an additional 140 years. Yet he was an old man when the story took place. We notice that all of Job’s possessions were doubled ‘after this‘.

Compare and contrast his starting portion will the books’ conclusion.

Just speculation, but if all his possessions were doubled, then perhaps his lifespan was doubled as well? Meaning, he was 70 during the affliction and then lived 140 years more for a total of 210 years. Either way, whether he was 50 years old, 70, or 90 when all this happened, he lived an additional 140 and would have certainly been alive one generation later to be contemporary with Moses

The plot, as they say, thickens.

Jethro is how people commonly refer to Moses’ father-in-law based upon the numerous times it is used in the Exodus account (10x). But he is also twice referred to as Hobab.

Now Heber the Kenite, which was of the children of Hobab the father in law of Moses …

And Moses said unto Hobab, the son of Raguel the Midianite, Moses’ father in law…

Let us therefore look at Hobab and Jobab in the Hebrew.

‘He’ with a point and ‘Yod’ ‘Vav’ with a point look very similar. Now unintentionally it seems an easy mistake for a scribe somewhere along the way to elongate the ‘Vav’ יוֹ top and side to make a ‘He’ חֹ thereby making Jobab into Hobab. Intentionally it seems an easy way to hide the truth while claiming an error if called to task. Remember, Job/Jobab was an Edomite king. Would a scribe have looked at that and said, ‘Someone before me must have made a mistake. Let me fix it.’ As Numbers 10:29 above shows, Reuel was the father of Hobab. Yet most people also assign the name of Reuel to Jethro/Hobab himself as the same person. Why is that? The following verses derives from Exodus.

2:16: Now the priest of Midian had seven daughters …

2:18: And when they came to Reuel their father, he said, How is it that ye are come so soon to day?

3:1: Now Moses kept the flock of Jethro his father in law, the priest of Midian …

It is based upon the identical term ‘the priest of Midian’ in Exodus 2:16 and Exodus 3:1 that the assumption is made that Reuel and Jethro/Hobab are the same person. There is no other scriptural reason to believe so, and as I have already shown direct evidence in Numbers, it is simply not the case. There would have been multiple priests of Midian, so the same term applied to both does not mean they are the same person. It’s strictly an assumption. There is no logical reason why Reuel and Jethro/Hobab could not have had the same title of ‘priest’ at the same time and in the same place.

Reuel was the name of Esau’s son, Jobab’s grandfather (Genesis 36:10). We do not know how old Reuel was when he died, so it is entirely possible verse 18 is referring to him, exactly as it says. He would have been very old but it is possible. Moses’ mother was Kohath’s sister after all (Exodus 6:20).

This would make the seven daughters the daughters of Reuel and not Jethro/Hobab. Meaning, they would be Jethro/Hobab’s mother and aunts, or possibly his sisters (if used in the way of ancestral daughters. Think Sons and Daughters of Abraham. Not literal but descendants of.) They are not Jethro’s daughters but Reuel’s daughters, exactly as the text says.

But… what about ‘father-in-law’? A look at the Hebrew and it seems that the ‘father’ part is based entirely on context. The same word H2859 – chathan חָתַן is used elsewhere to mean ‘mother-in-law’ and ‘son-in-law’.

Cursed be he that lieth with his mother in law…

…Thou shalt this day be my son in law…

Therefore, there is no reason why Jethro/Hobab has to be his ‘father’ in law. He could just as easily be ‘brother’ in-law or any other type of in-law. I bring this point up because the only contradiction I see to Job/Jobab and Jethro/Hobab being the same person is this.

Now the priest of Midian had seven daughters…

[before the trial] And there were born unto him seven sons and three daughters.

[after the trial] He had also seven sons and three daughters.

But when considering that Reuel is Reuel and not another name for Jethro/Hobab, and those seven daughters are Reuel’s daughters, as it states in verse 18, and not Jethro’s/Hobab’s daughters, the contradiction disappears. Job/Hobab/Jethro could have told Moses the entire story of his affliction during their time together in the wilderness, or even long before, allowing Moses to record it, as seems to be common opinion that he is the author of the book. This furthermore ties the Book of Job (which seems like a one-off without any connection to the narrative) directly into the main story the scriptures have to tell. It also shows how we do not need to be bloodline descendants of Jacob to know the Most High. Not only did an Edomite have direct access to the God of Israel, but was integral to Moses and the Exodus which, if I had to guess, would be the reason the scribes may have changed things, if indeed that is what happened.

Thank you for reading and I hope this has spoken to you.

Peace and blessings to you, 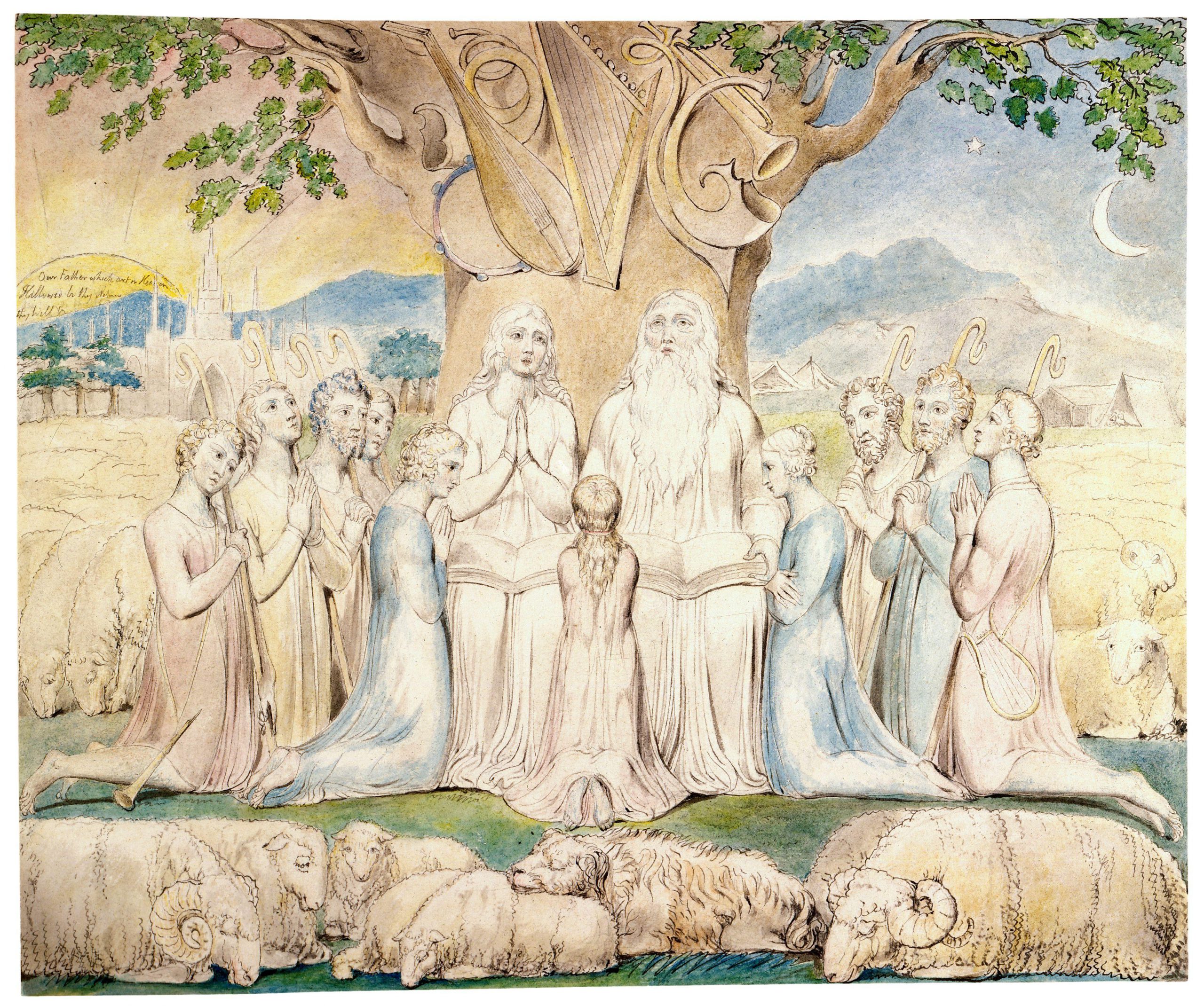