The Revelation of Stephen 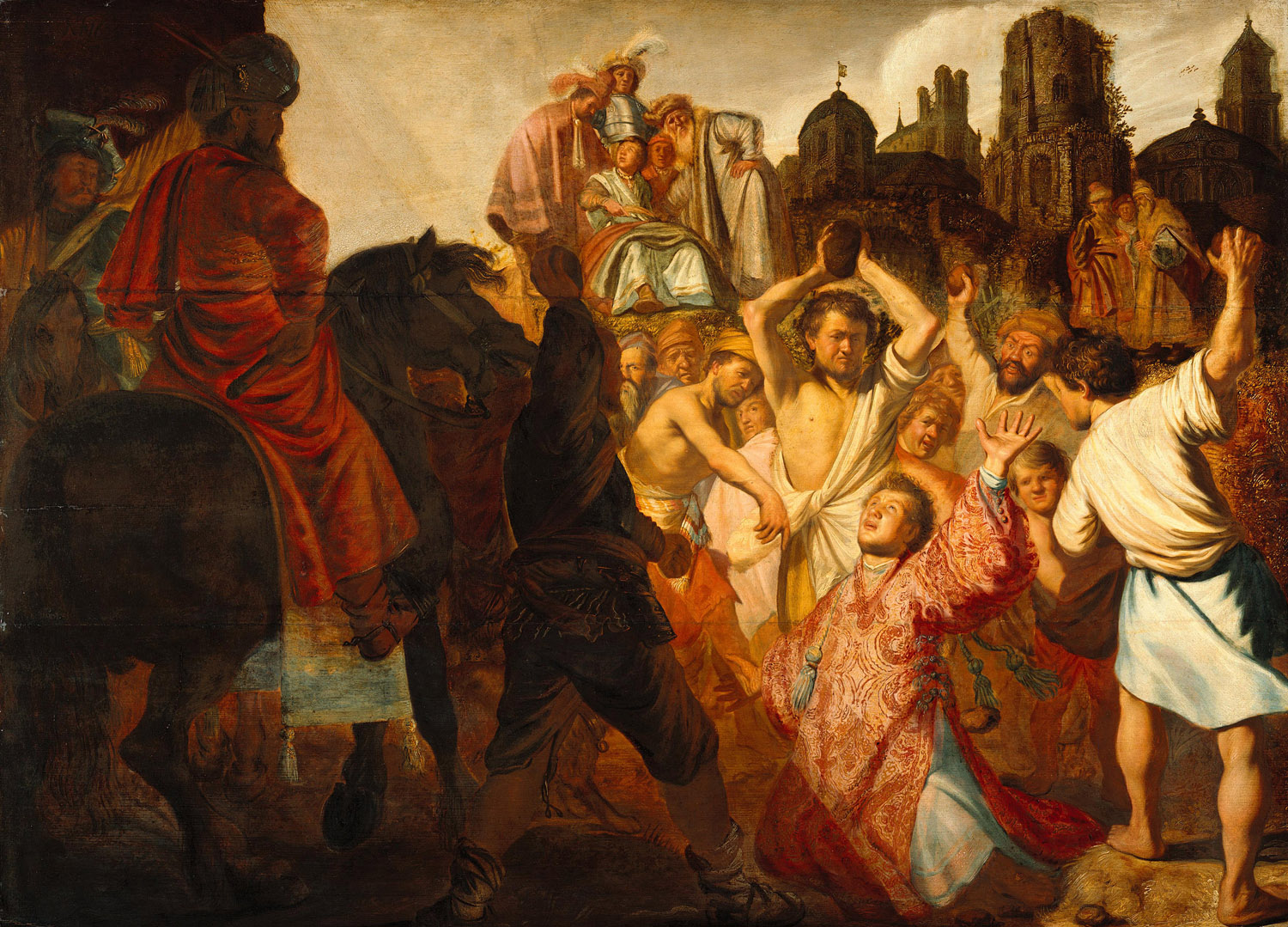 The Revelation of Stephen

TWO years after the Ascension there was a contest about Yahusha. Many learned men had assembled at Yerushalayim from Ethiopia, the Thebaid, Alexandria, Yerushalayim, Asia, Mauretania and Babylon. There was a great clamour among them like thunder, lasting till the fourth hour.

Stephen, a learned man of the tribe of Benjamin, stood on a high place and addressed the assembly. Why this tumult? said he. Blessed is he who has not doubted concerning Yahusha. Born of a pure virgin he filled the world with light. By Satan’s contrivances Herod slew 14,000 (144,000) children. He spoke of the miracles of Yahusha. Woe to the unbelievers when he shall come as judge, with angels, a fiery chariot, a mighty wind: the stars shall fall, the heavens open, the books be brought forward. The twelve angels who are set over every soul shall unveil the deeds of men. The sea shall move and give up what is in it. The mountains fall, all the surface of the earth becomes smooth. Great winged thrones are set. Yahuah, and Mashiach, and the Holy Spirit take their seats. The Father bids Yahusha sit on his right hand.

At this point the crowd cried out: Blasphemy! and took Stephen before Pilate.

Pilate stood on the steps and reproached them: You compelled me to crucify the Innocent; why rage against this man? Why gnash your teeth? Are ye yet foolish?

They led Stephen away. Caiaphas ordered him to be beaten till the blood ran. And he prayed: Lay not this sin to their charge. We saw how angels ministered to him.

In the morning Pilate called his wife and two children: they baptized themselves and praised Elohiym.

Three thousand men now assembled and disputed with Stephen for three days and three nights. On the fourth day they took counsel and sent to Caesarea of Palestine for Saul of Tarsus, who had a commission to seize upon Christians. He took his place on the judgement seat and said: I wonder that thou, a wise man, and my kinsman, believest all this. None of the Sanhedrin have given up the Law. I have been through all Judaea, Galilee, Peraea, Damascus, and the city of the Jesitites to seek out believers.

Stephen lifted up his hands and said: Silence, persecutor! Recognize the Son of Elohiym. Thou makest me doubt of my own descent. But I see that thou shalt ere long drink of the same cup as I. What thou doest, do quickly. Saul rent his clothes and beat Stephen. Gamaliel, Saul’s teacher, sprang forth and gave Saul a buffet, saying: Did I teach thee such conduct? know that what this man saith is acceptable and good.

Saul was yet more enraged, and looked fiercely on him, saying: I spare thine old age, but thou shalt reap a due reward for this. Gamaliel answered: I ask nothing better than to suffer with Mashiach. The elders rent their clothes, cast dust on their heads, and cried: Crucify the blasphemers.

Saul said: Guard them until the morrow. Next day he sat on the judgement seat and had them brought before him, and they were led away to be crucified. An angel came and cast away the cross, and Stephen’s wounds were healed. Seven men came and poured molten lead into his mouth and pitch into his ears. They drove nails into his breast and feet, and he prayed for their forgiveness. Again an angel came down and healed him, and a great multitude believed.

Next day all assembled and took him out of the city to judge him. He mounted upon a stone and addressed them: How long will ye harden your hearts? The Law and the Prophets spoke of Mashiach. In the first Law, and the second, and the other books it is written: When the year of the covenant cometh I will send my beloved angel, the good spirit of sonship, from a pure maiden, the fruit of truth, without ploughshare and without seed, and an image of sowing (?), and the fruit shall grow after the . . . of planting for ever from the word of my covenant, and signs shall come to pass. And Isaiah saith: Unto us a child is born, &c. And again: Behold, a virgin shall conceive. And the prophet Nathan said: I saw one, a maiden and without touch of man, and a man child in her arms, and that was Adonai of the earth unto the end of the earth. And again, the prophet Baruch saith: Messiah the eternal appeareth as a stone from the mountain and breaketh in pieces the idol temples of the . . . David also said: Arise, O Lord, unto thy resting place, &c. Understand then, O foolish ones, what the prophet saith: In this word shalt thou judge.

And he looked up to heaven and said: I see the heaven opened and the Son of man standing at the right hand of Elohiym.

Then they laid hands on him, saying: He blasphemed! Gamaliel said: Wherein? This righteous man hath seen the Son saying to the Father: Lo, the Jews rage against me and cease not to ill-treat them that confess my name. And the Father said: Sit thou on my right hand until I make thine enemies thy footstool.

Then they bound Stephen and took him away to Alexander, the reader, who was a chief of the people, and of the troop in Tiberias.

In the fourth watch of the night, a light as of lightning shone round about him, and a voice said: Be strong. Thou art my first martyr, and thine hour is nigh. I will write the record of thee in the book of everlasting life.

The Jews took counsel and decreed that he should be stoned. There were with him Abibas, Nicodemus, Gamaliel, Pilate, his wife and two children, and a multitude of believers. Saul stood forth and beckoned and said: It would have been better that this man should not be slain, because of his great wisdom: but forasmuch as he is an apostate, I condemn Stephen to be stoned. The people said: He shall be stoned: but those who stood in the front rank with staves looked on each other and durst not lay hands on him: for he was renowned among the people.

Saul was wroth, and stripped those servants of their garments and laid them on the table; and commanded the men to stone Stephen.

Stephen looked round and said: Saul, Saul, that which thou doest unto me to-day, that same will the Jews do unto thee to-morrow. And when thou sufferest, thou shalt think on me.

The people cast stones upon him so thickly that the light of the sun was darkened. Nicodemus and Gamaliel put their arms about him and shielded him, and were slain, and gave up their souls to Mashiach.

Stephen prayed, saying: Forgive them that stone us, for by their means we trust to enter into thy kingdom. And at the tenth hour he gave up the ghost. Then beautiful youths appeared, and fell upon the bodies and wept aloud: and the people beheld the souls borne up by angels into heaven, and saw the heavens open and the hosts coming to meet the souls. And the people mourned for three days and three nights.

Pilate took the bodies and put each one into a silver coffin with his name upon it: but Stephen’s coffin was gilt: and he laid them in his secret sepulcher. But Stephen prayed: Let my body be buried in my land of Serasima in Kapogemala (Caphargamala) until the revealing, when the martyrs that follow me shall be gathered together. And an angel came and removed the bodies thither.

But Pilate rose early to burn incense before the bodies, and found them not; and rent his clothes, saying: Was I then not worthy to be thy servant? On the night following, Stephen appeared and said to him: Weep not. I prayed Elohiym to hide our bodies. In the time of our revealing one of thy seed shall find us after a vision, and thy desire shall be fulfilled. But build a house of prayer and celebrate our feast in the month of April. After seven months thou also shalt rest. And Pilate did so: and he died, and was buried at Kapartasala: and his wife also died in peace. But the holy martyrs appeared thrice to venerable and believing men, speaking to them, and revealing divine words: for after their death many believed.

One of Franko’s two manuscripts omits all mention of Pilate, who is indeed not necessary to the story. The statements about him are quite irreconcilable with other legends, even those of the Eastern Church which take the favorable view of him.

Franko is clearly right in saying that this romance implies a continuation, and most likely right in holding that the Lucian-narrative implies a previous story. But the extravagance of the Slavonic text is such that one cannot but think it has been improved by the translator: and if Pilate could be gratuitously inserted -as I think he has been- by one redactor, others may equally well have been at work.