The Problem with Stonehenge: History Is a Hoax

THE RAIN wet our faces like every other day in Scotland and Ireland or practically anywhere else in the United Kingdom. Such were the weekly weather reports. Rain. Rain. Chances of rain. Probable rain. Definite rain. Keep your boots on rain. So I guess you could say I wasn’t prepared for what we were going to experience at Stonehenge, and also afterwards, but not because we left our umbrellas in the car. The abnormalities had begun while driving in a westward direction somewhere along the Amesbury Bypass. Perhaps five minutes east of Stonehenge, twenty minutes north of Salisbury, I started noticing huge unnatural mounds sloping across the English countryside. And when we arrived, dozens of mounds surrounded the crop-like rock formation. Perhaps that’s why I passed up Stonehenge altogether. I was too busy pointing out the burial mounds to my wife to think anything of the insignificant looking stones propped up in an empty field.

Sarah simply rolled her head sideways alongside the passenger side window—her go-to strategy whenever she hawk-eyes her preferred parking spot but chooses not to let me in on the news until after the car behind us swoops in for the kill. It’s also generally how most roadside directions went down throughout the duration of our life in Europe. Clearly, memories are on my mind.

She waited until I missed the turnoff and then said: “I think we just passed Stonehenge.”

The official narrative enforces the belief that Stonehenge was purposed by the Druidic Mysteries. The Stonehenge complex was therefore utilized for cremation or the ceremonial magical rites of a soul’s ashes for his return to the stars of his origin. Essentially, the very philosophical worldview that Plato popularized for the masses, and that includes Christianity. Platonists. To this very day, Plato is still critiqued by occultists for making their secrets known. I figure it’s the most probable cause as to why Socrates would be forced into suicide by the Elite. Loose lips sink ships. Then again, Plato was a spook. Socrates was too. If you haven’t read my papers on death and the “immortal soul” according to the Mystery religions in errant contrast to Scripture, then I’d suggest the following: The Gospel of Plato. Alexander & the City of Immortals. Eternal Death. Gehenna. The Afterlife According to Job. According to 2 Esdras. Consuming Fire. The Lion King. Birthdays. The Bad People. Greek Hellenization was essentially one grand initiation. And since we’re on the subject of the druids, Winnie the Pooh.

Some people I’ve spoken to believe Stonehenge was Israeli in origin. This would be due to the fact that they also hold the druids to derive from the apostate tribes of Israel, divorced from Yahuah and scattered from the promised land. Interesting. Personally, I tend to suspect Stonehenge was pre-deluvian and first set up by the Watchers. But it’s terribly difficult to come to any conclusions anymore. There’s an interesting passage in Jubilees whereas Kainam the son of Arpachshad wandered the post-flood world seeking a city to seize. Mm-hmm, there were cities to be repopulated. Stop and think about that for a moment.

Fast-forward to modern, merry-day England. The rain was still moistening our faces while I asked around about the mounds. The only explanation I was given is that people wanted to be buried close to Stonehenge. But that doesn’t even make sense. If anything, burial pits or mounds signify a mass and sudden disposal, not something that is gradually built upon as new bodies slowly accumulate and take residence over the centuries. The official narrative once again insinuated that housing complexes would have once been fenced around Stonehenge, and it only makes sense that they would. A temple-stylized complex would have naturally attracted pilgrims. So, how do slowly accumulating mounds play into that? The answer is, they don’t. If pilgrims were so obsessed with having their celestial journey begin at Stonehenge, why wouldn’t they follow through with ceremonial rites aimed at securing their souls in the after-world? Again, the answer is: Nobody would want to be buried at Stonehenge. 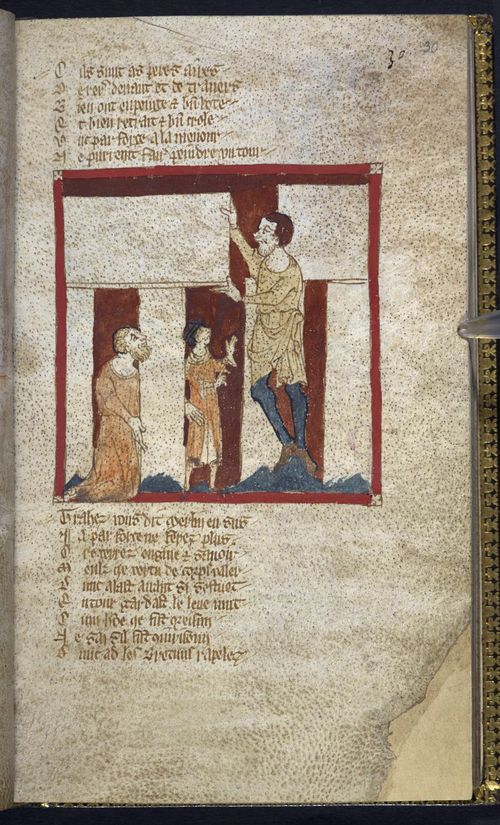 I’ve never been in any other museum and gift shop on earth where they felt the need to repeatedly remind me how real people built a certain place. Like, real people discovered the Titanic wreckage. Real people landed on the moon. Real people discovered the coiling double-helix structure of the DNA molecule. Could this possible be because the oldest account of Stonehenge (11th-century, apparently)  depicts a giant, standing alongside a priest or a wizard, and having a central role in Stonehenge’s construction? Mm-hmm. But that’s probably none of my business.

Nobody seemed to pay any attention to these giant mounds. Nobody even seemed to bat an eye or look twice at them. Contrarily, my family and I spent most of our time exploring the surrounding woods and countryside, finding whatever mound wasn’t privatized or blocked off by a fence. And my children knew. That probably has something to do with the fact that Ira would go about the house we were renting each day—pick any country—setting booby-traps for Nephilim invaders each night. And he’d sleep with an ever-accumulating arsenal of weapons under his pillow, thanks to any number of castle gift shops. After climbing to the top of one such mound, and with visions of David and Goliath dancing in their heads, my sons collectively said: “We’re standing on top of giants!”

If you’ve managed to read this far, you’re probably still asking yourself, “What’s the problem with Stonehenge, again?”

The problem with Stonehenge is that it’s not that old.

Here, let’s try an activity. I call it: “I want you to scroll through the following photos (there’s another couple dozen like it), and tell me the whereabouts of when you think Stonehenge was constructed, accordingly.” 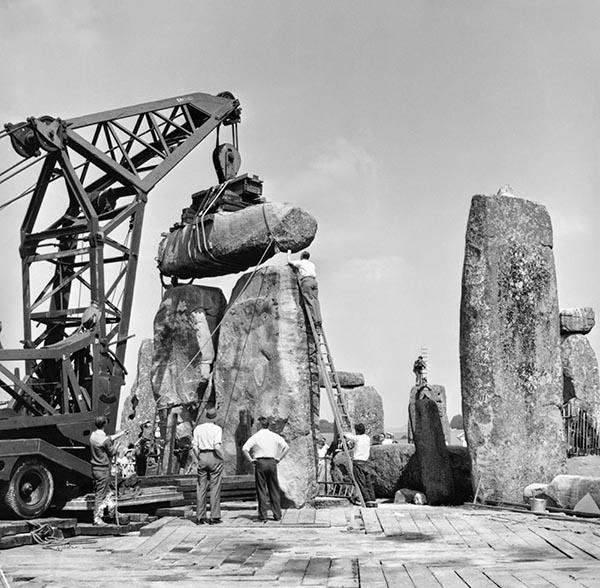 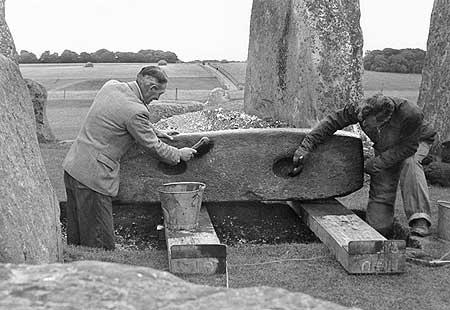 You will probably tell me they were simply restoring Stonehenge to its former glory. Sure, it’s certainly a possibility. Though let’s be honest, the steel crane really makes you wonder about the historical reliability of giants. Here in the Americas, there’s Indigenous stories of giants so large they could pick up a bison and run with it in their bare arms. But that’s no longer the point that I’m trying to make. You will furthermore tell me there are earlier photos proving Stonehenge existed at an earlier time. Perhaps. Deception is a curious thing. There’s photos of men walking on the moon and footage the Titanic wreckage too. Titanic. I’ve exhibited time and again that they’ll haul the public out to an ancient Tartarian city, like the mythical Camelot city of Chilaga, hence Chicago, call it a World Fair and then completely destroy it. 1893 Chicago World Fair. This is precisely the sort of thing which they would do. Or in the case of Stonehenge, create something new and call it old.

Debating the preexistence of Stonehenge is probably a mute point. It really doesn’t matter either way, because we’re not done with our activity yet.

As a reminder, we’re playing something which I call: “I want you to scroll through the following photos (there’s another couple dozen like it), and tell me the whereabouts of when you think >fill in the blank< was constructed.” We’ll be traveling all around the world. 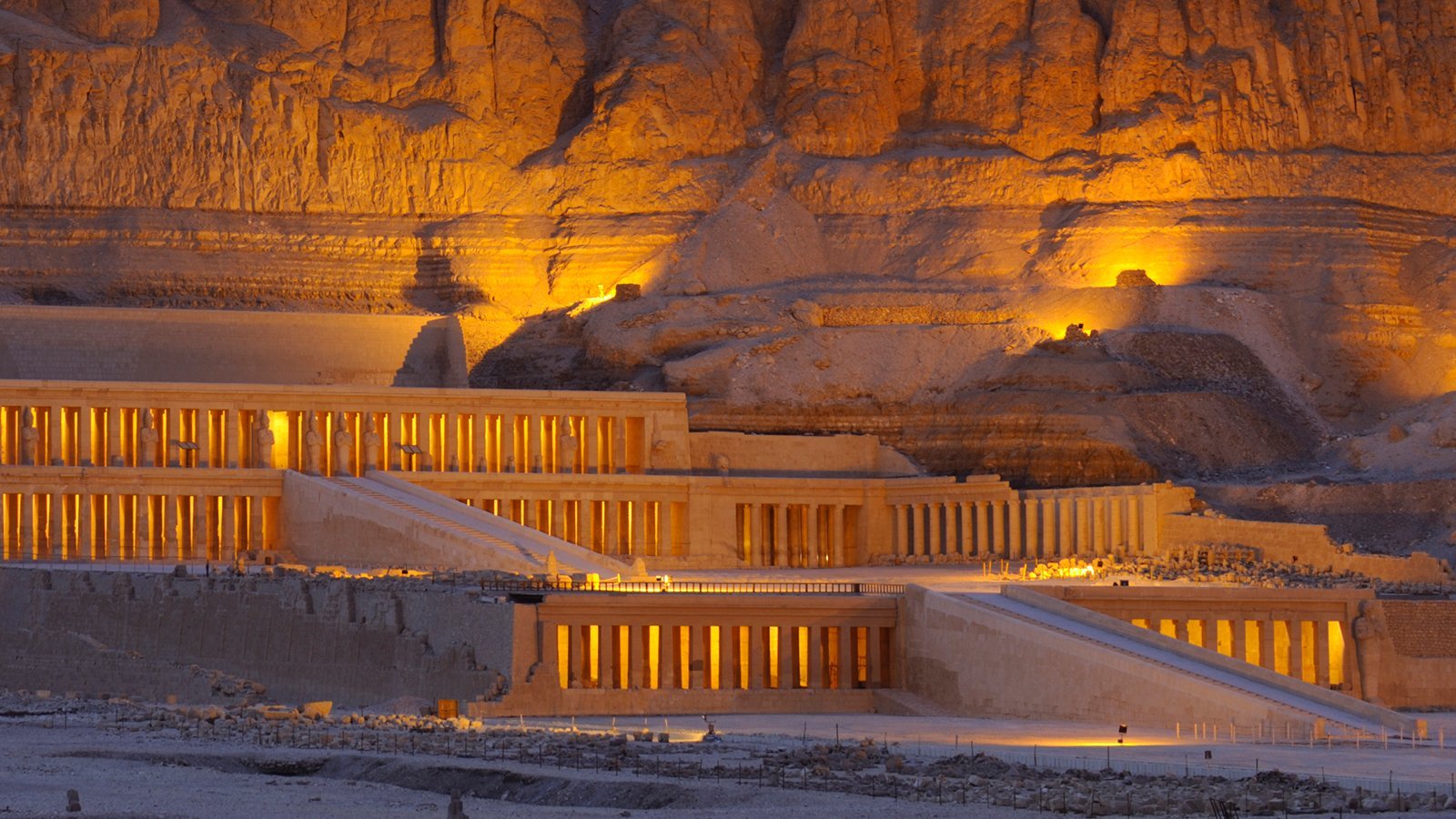 Our second stop takes us south of Europe to the west bank of the Nile, near the Valley of Kings. You’re looking at the Mortuary Temple of Hatshepsut, also known as the Djeser-Djeseru. We’re told it was originally built by pharaoh Hatshepsut sometime in the Eighteenth Dynasty, perhaps 1450 BC.

And now let’s take a look at pharaoh Hatshepsut’s temple in the late 19th century A.D. 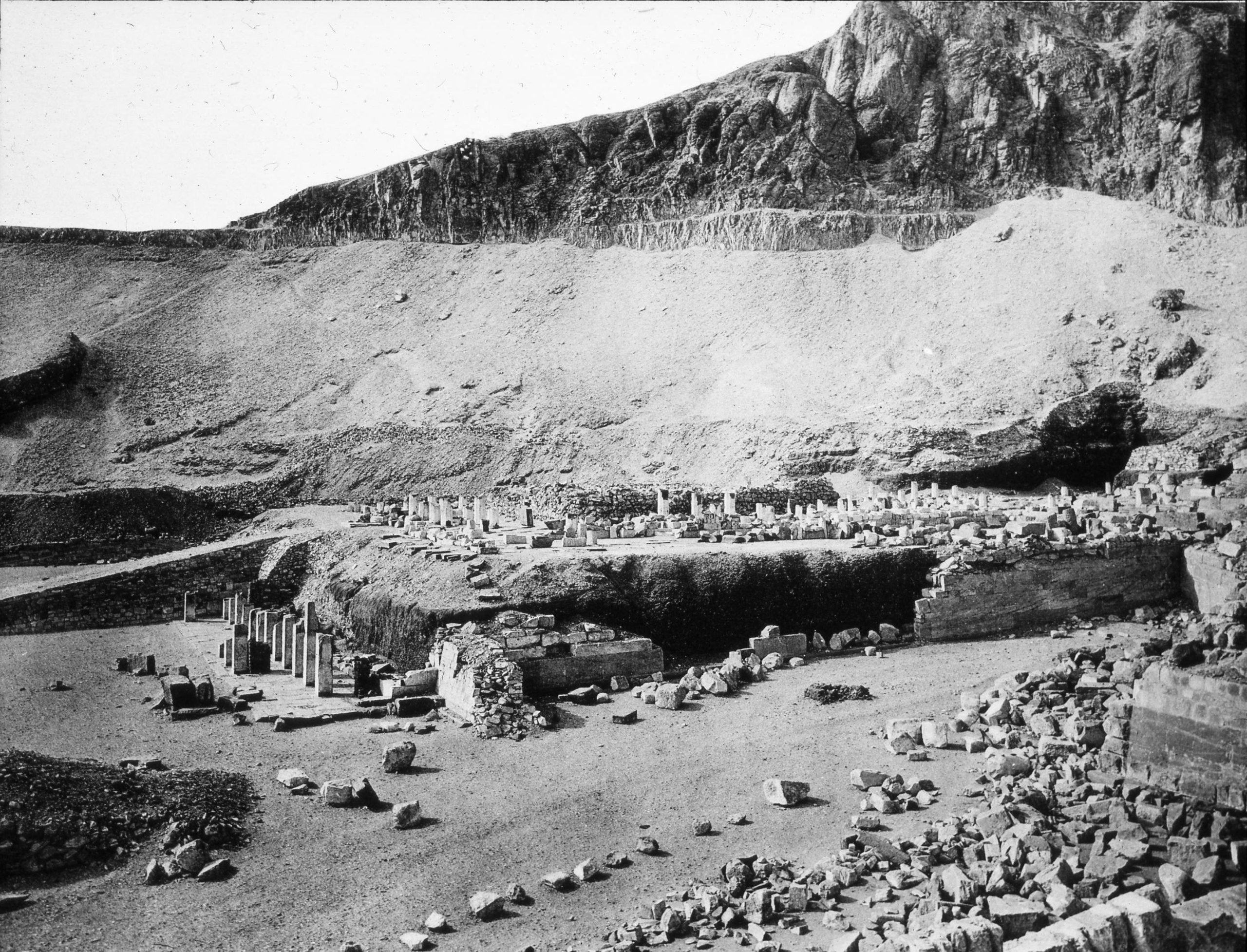 Kind of a stark difference, don’t you think?

You will probably tell me that they simply reconstructed pharaoh Hatshepsut’s Temple to scale and everybody knows it. They’re certainly not hiding the fact that something or other was in ruins as little as a century ago. Perhaps they stumbled upon a rock query. I don’t know, you tell me. I actually pulled the above picture from the Temple’s article on The Wikipedia, spook literature, just to prove a point. They actually show you the modern day Temple and then reveal a photo depicting what appears to be a series of asymmetrical rocks lined up in neat looking rows. They want you to walk away believing that they’d never lie to you about something as serious as our past. But in order to do so, you have to convince yourself that the present narrative is in no way imagined. And yet, Hatshepsut is imagined. That’s how the cognitive dissonance, and their control, sinks even deeper in.

Let’s make another stop, shall we? 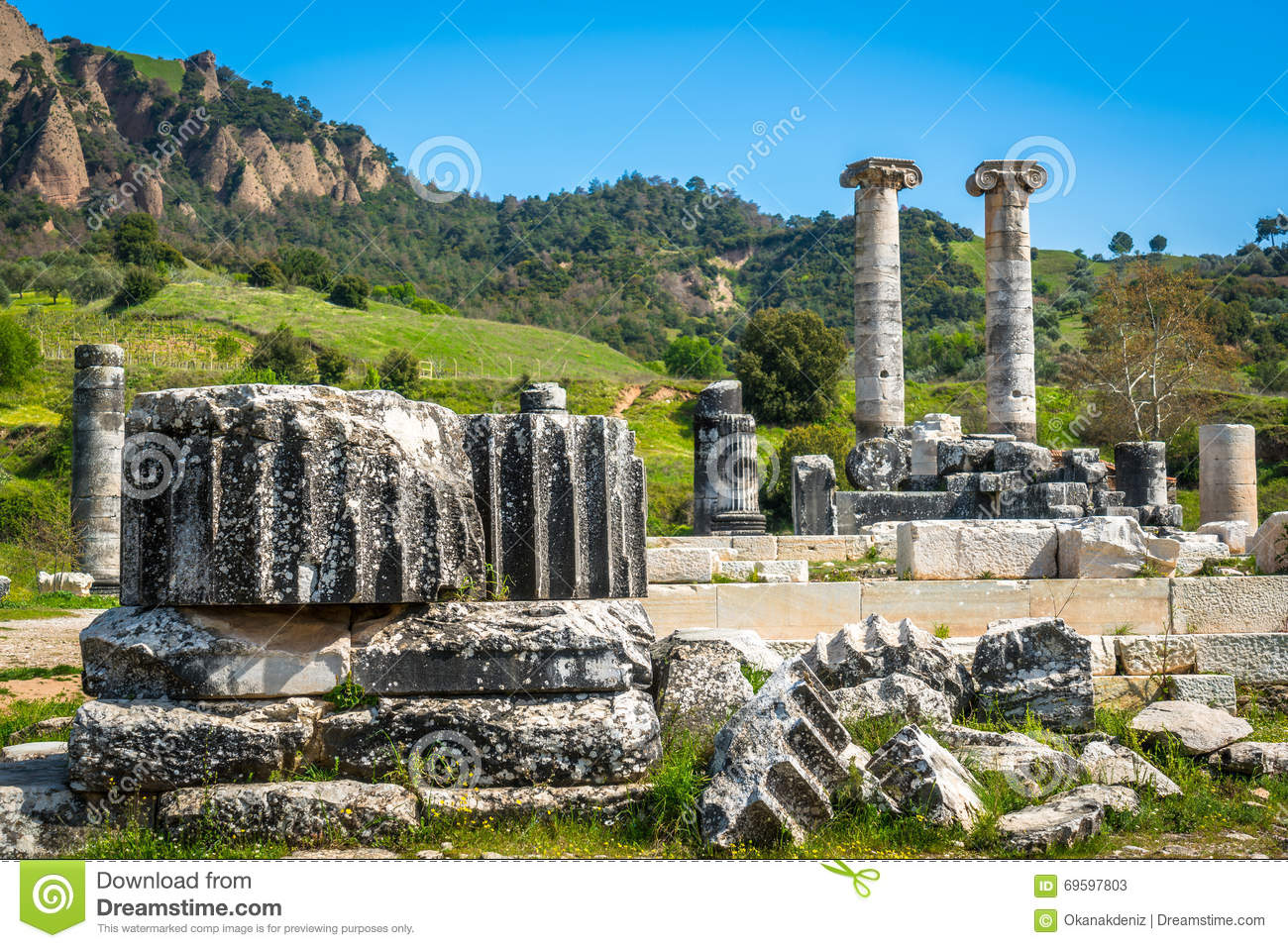 Here’s a present day photo of the ruinous Temple of Artemis in Sardis, modern-day Turkey. I decided to go for the digital print which is also for sale on Dreamstime, if you’re interested. The Wikipedia says it was built by the Greeks in 300 BCE and later renovated by the Romans in the 2nd century CE. Also, “the Temple of Artemis was the fourth largest Ionic temple in the ancient world.”

Now let’s take a look at the Temple of Artemis in November of 1917. 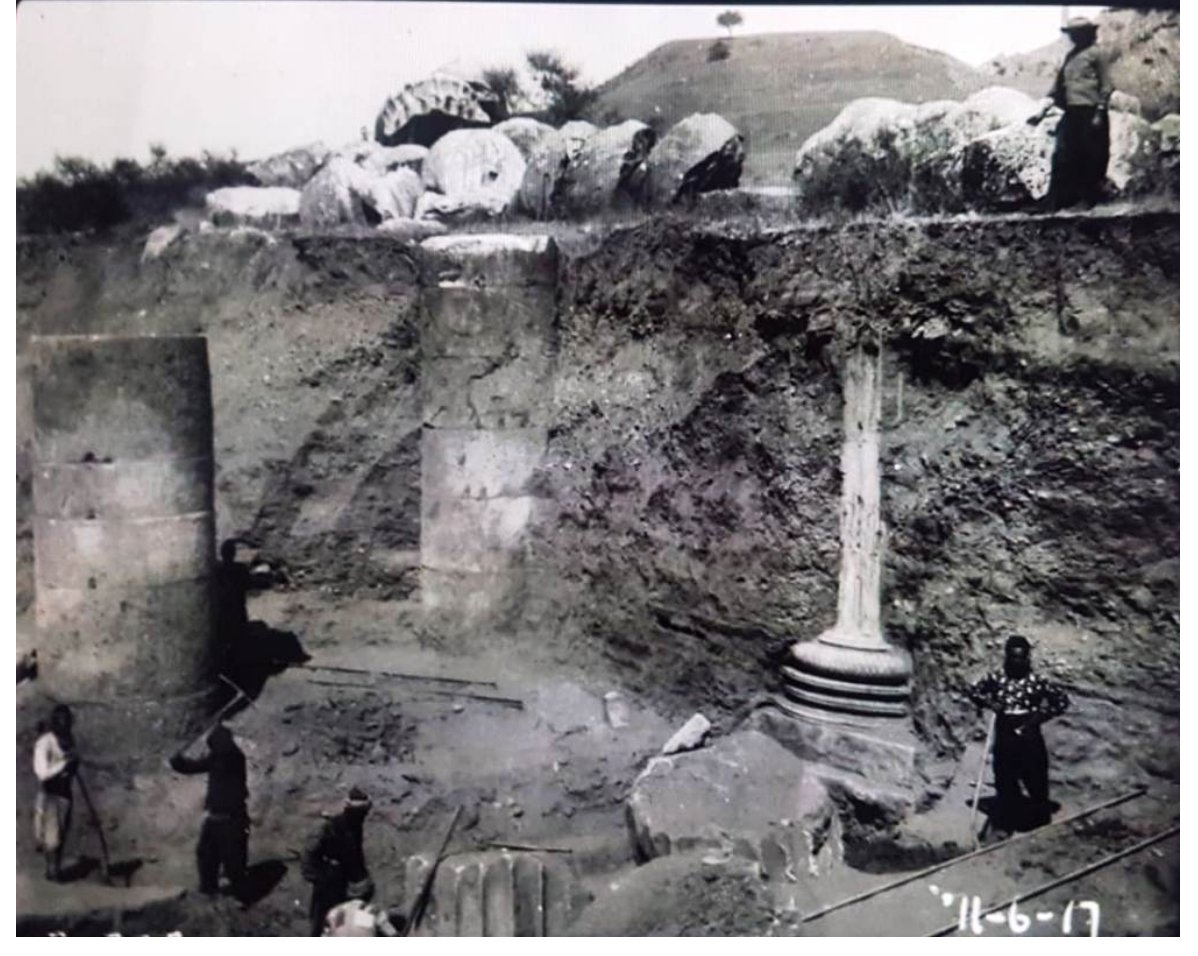 Photos of the dig are hard to come by. My search on Google produced nothing but broken links and dead ends. This tells me that some things are never intended to be dug up—the Temple of Artemis in Turkey exemplifying one such example. History is being scrubbed. Or put it in slightly different terms, the Temple of Artemis never was a basement, if you get my drift. Looking at stuff like this is the basic equivalent of sticking your nose where it doesn’t belong. I figure spooks put way too much financial investment into erasing the mud flood from our collective consciousness to take a chance at shattering the illusion and ending the dissonance.

Keep in mind this latest paper, brought to you by my sponsor, Wilkins Coffee, falls in the heels of our ongoing discussion, The Anatomy of Anatoly Fomenko and The Two Lives of Napoleon Bonaparte. You can read them here, Fomenko, and here, Bonaparte. Fomenko theorizes that history is a repeated copy of itself. Meaning, the official narrative is a plagiarized fraud. I furthermore demonstrated how easily actors in history are Photoshopped by comparing the lives of Napoleon Bonaparte and Napoleon III. It’s one thing to believe the world is a stage and that actors fill the screen, and entirely another to conclude the events themselves are an illusion. While the Mortuary Temple of Hatshepsut may indeed have been nothing more than a rock quarry, the Temple of Artemis in Turkey, for all we know, was a functioning establishment in as little as two centuries ago.

If you can begin to wrap your fragile mind around this possible, then I will welcome you to the lost world of the mud flood.

The problem with Hatshepsut and the problem with Artemis is the problem with Stonehenge. His-story has been scrubbed. It’s been re-written. Maybe even invented. If we choose to undress from our Luciferian indoctrination and pay attention to the curtain being drawn, I believe Yahuah has something extraordinary to show us.

Pick up a shovel. We’ve barely yet begun to dig. 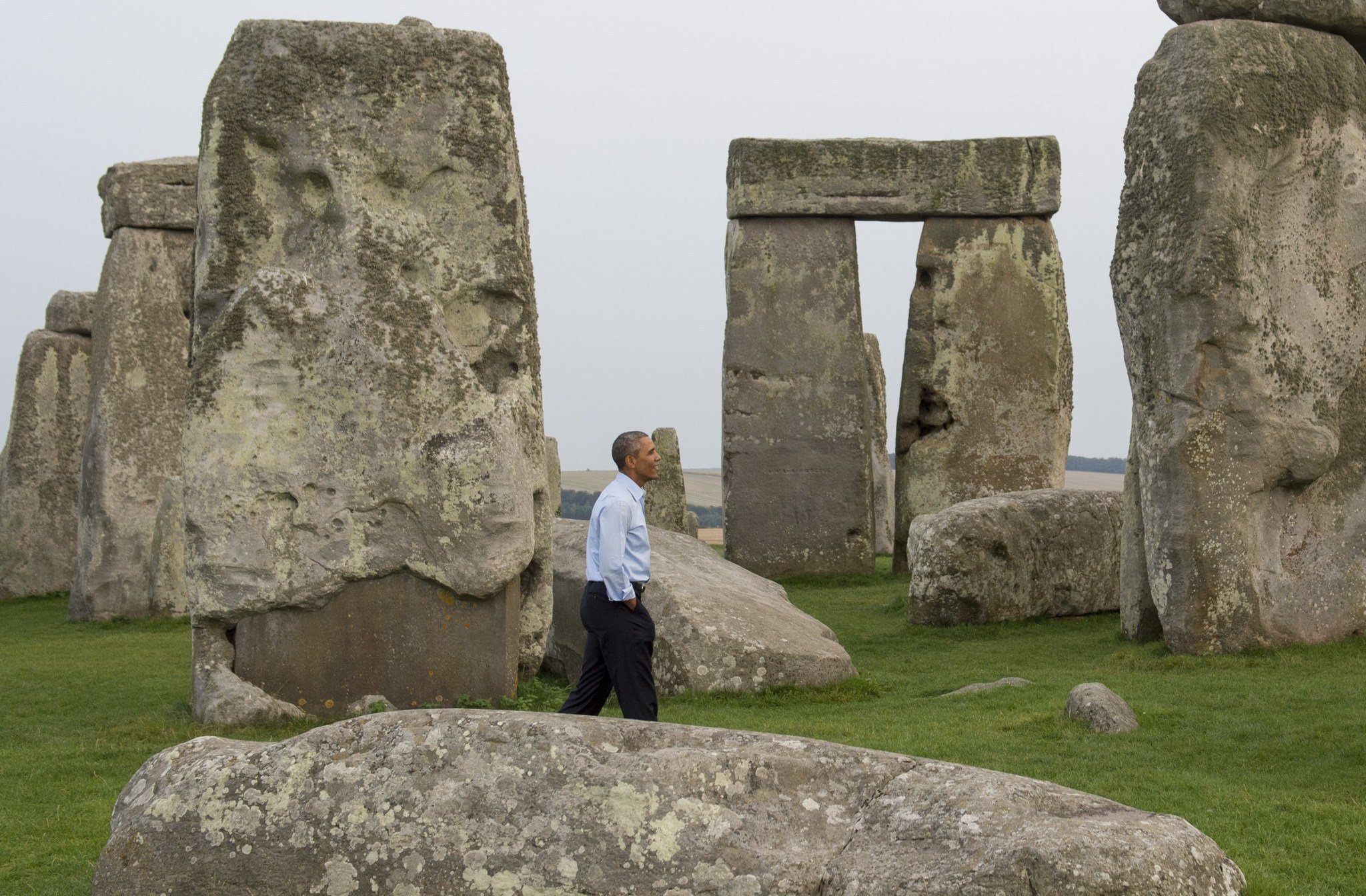 After completing this article I took my own advice and did a little bit more digging online. I soon stumbled upon a series of photos which detailed President Barack Obama’s visit to Stonehenge in 2014, wherein he walked about freely where no tourists today are allowed to go. Look closer at the stone erected behind him. Mm-hmm.

Now I’m quite certain of it. 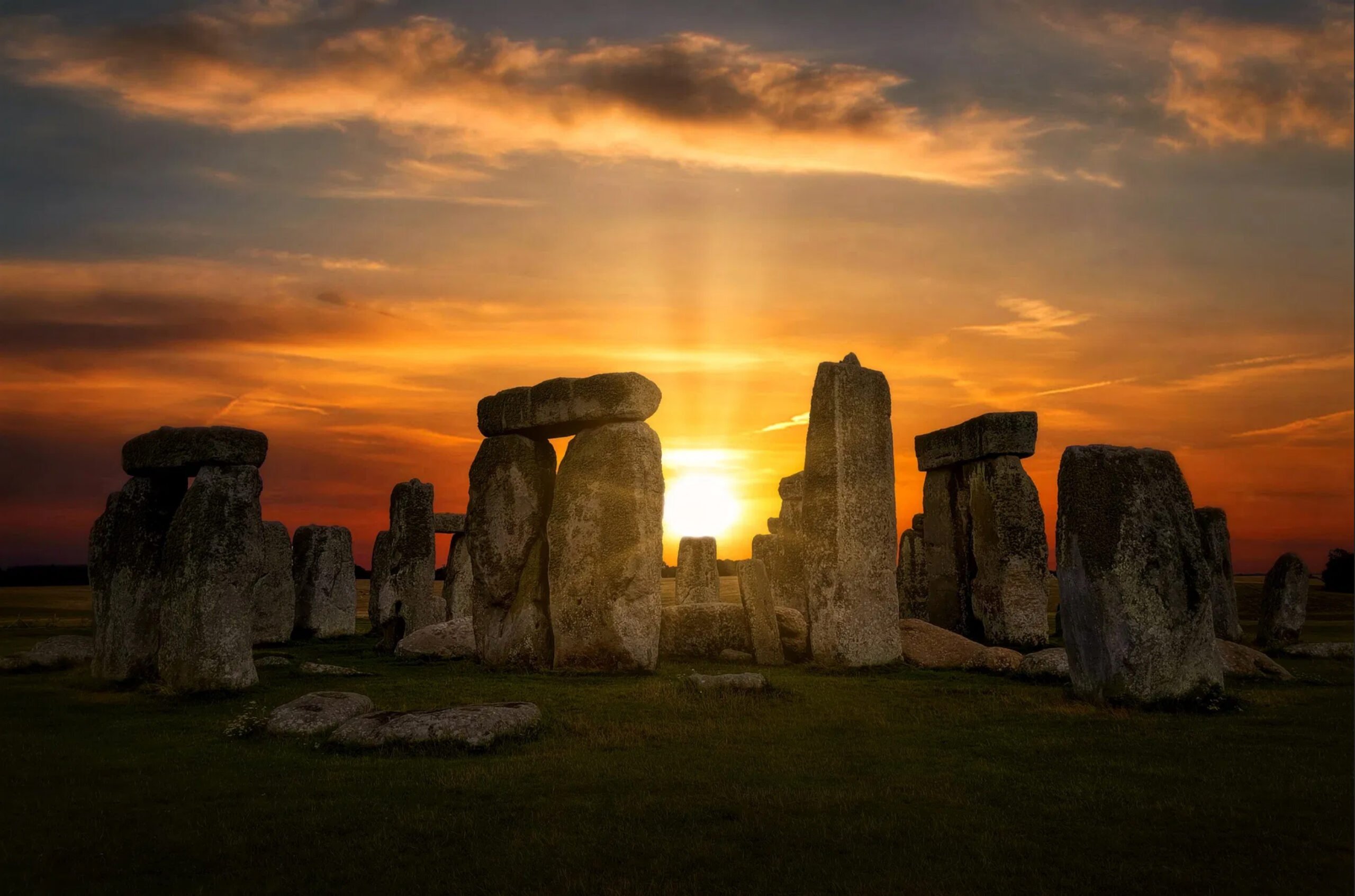