MY VISION OF HEAVEN & THE ROYAL PRIESTHOOD 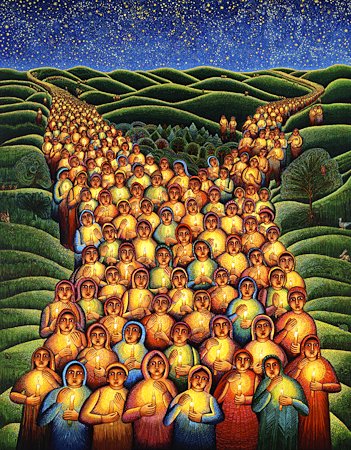 WHEN MY WIFE AND I EXITED THE INTERSTATE and parked the fifth-wheel in Charleston, South Carolina a little over a year ago, I likened it then to a desert island. You know, Swiss Family Robinson or Robinson Crusoe. We were castaways only for a short time, I assured her, and that in itself, not the journey getting here, would prove to be the great adventure. Perhaps I should have related our residency in the Holy City to a pilgrimage, because if you’ve ever been on one, you’ll know the physical destination is secondary to what clothes our souls in the very act of pilgriming.

It was shortly after our arrival when I had that moment from The Matrix, where Neo wakes up in the incubator, sees the world for what it really is, and unplugs himself from that damnable machine. I guess you could say I ingested the pill that cannot be undone. And what I myself discovered is not so different. I had been lied to, about almost everything. This is the kind of stuff that, once finally revealed at Jesus’ second coming, will consequently make everything about the Beast Government illegitimate, just by its very exposure to the light. But in the meantime, the conspirators, financers, power-grabbers, and confederacy agents of the government beast will do anything they can to keep us ignorant and groveling in the darkness for the slop we so voluntarily flap our wings, toot our horns, and squeal for.

I couldn’t stomach the blatant propaganda in movies anymore. Forget hypocritical Hollywood. I lost all appetite for social media too, with its endless hyperactive distractions of numbed-down simplicity and the steaming plates of vomit daily dished out from its virtue signalers. In a way, it had become an internet ghetto for lap dogs and glitter-seeking pigeons. I couldn’t understand how its legions of plugged-in users could care less about Agenda 21 or the TPP unless the mention of their names referred to a real estate company and toilet paper. I brought a swift end to that and then went into seclusion. My camera broke. I never got around to fixing it. Over the next several months I lost contact with just about everybody as I reflected on the firmament above and the world around me. It was all so overwhelming, the cancerous disease of slavery that just keeps spreading and spreading, and aside from my wife, I had no one to turn to who was of the same mind.

Those who know me well will hopefully take note of the fact that I think very little of myself. What I mean by that is, I’ve always struggled finding a place of comfort in God’s kingdom, mainly because I see myself as a great sinner, completely unworthy of the free gift of salvation that only comes through faith in Jesus’ atoning sacrifice on the cross. Another words, if I have a difficult time pitting myself in heaven, it’s because I myself am in no way worthy to stand in the mighty presence of YAHWEH. My only comfort is knowing that Jesus has paid it all.

So there I was one night, looking over the various biographies on my bookshelf of people who were long-dead and gone, either conscious in God’s holy presence or consciously separated from Him for an eternity, when I recognized the voice of the LORD whispering into the deep inner-crevices of my soul’s ear. He said rather quickly, and only once: “Go outside, I have something I want to show you.”

I gave a resounding, “Yes Lord,” and went for my coat.

My wife saw me leave, and I could tell by the look in her eyes that she knew this was something of pressing spiritual importance. I started walking along the reservoir, which doubles as a bird and alligator preserve, with its humbling symphony of croaking toads and insects, and gazed up at Jupiter gliding along the hind-paw of the Constellation Leo, but heard nothing of the Lord’s voice.

I finally asked, “Should I keep going?”

“Go a little further,” He said.

I kept on walking, but as I did so I began to contemplate on my life. I considered my many sins and failures, so much so that the weight of my inadequacy hung like wet clothes over my skin. I became dejected in spirit, feeling as though I were nothing more than a filthy rag, and as I gazed up at the glorious constellations I considerately thought, Who am I?

It was then that I felt the unexpected presence of an angel walking at my side. This wasn’t common by any means. So I kept on walking along the reservoir like that, with the most unusual presence of an angel. I was in the Spirit. The crickets and the croaking toads and the constellations, along with the blanket of darkness that surrounded me, soon drifted away, and I found myself moving weightlessly, despite the thick white fabrics that now formed a priestly garment all the way down to my ankles. I may have been barefoot too. Some sort of shawl hung like a drape around my neck, and a plate displaying rows of glimmering minerals or jewels crested my chest. The cracked pavement I was walking on now radiated with the reflected light of the glories surrounding me, and though I couldn’t smell or hear anything, let alone see beyond my own arms length, the curling smoke of incense seemed to lift from whatever crackled in the lantern I was carrying. One thing was certain though, if my vision spoke of peace and rest, it was only because the brilliant light surrounding me indicated that I was in the Lord’s presence.

I carried myself like that for a while, and then the light that gave definition to my priestly garbs was no more, because I was suddenly walking back along the reservoir. Only it was quieter than a moment ago, and far, far darker. The angel that I had defined at my side was detected no more, and I suddenly felt so alone. Deathly alone. Scared, even. There was something evil lurking about in the gravy that smeared the night, like conspirator eyes narrowing in on me, and with my inner-voice I cried out to the Lord, “Where did you go? Why did you leave me?”

That’s when I finally heard the Lord’s voice. He said: “DO NOT BE AFRAID OF WHAT IS ABOUT TO COME UPON THE WORLD.”

Indeed, I don’t know all that is written for this fallen creation, nor when the Beast will play its final hand. So long as I live, I’m still the victor, but if I die I gain, because I can enter into the Lord’s presence knowing the victory is already won. For those of us who’ve called upon the name of the Lord as our one and only Savior, and believe in our hearts that the Father raised Him from the dead, then we can rest assured that God has cleansed us of the filth that makes up our sin and counted us worthy to stand eternally in his presence, because Jesus alone is worthy. Taking our sins upon Himself on the cross, He speaks on our behalf. We are a royal priesthood. Jesus Himself is our High Priest. And He is glad to bring us into his holy service and to call us his brothers.

I sat on this vision for a while because I wasn’t completely certain if it was something God had intended as a private conversation or to be shared in a way that perhaps others might benefit from. I’m posting this hoping for the latter. Similarly, my rejoining with social media and other online outlets hasn’t been out of desire to be a part of the Globalist agenda again. I want nothing of that foul slop which the conspirators of the Beast feed us and dumb us down with to the point of cultural and moral retardation. Really, the disease is everywhere. If anything, it’s simply because I want to tell my friends and loved ones that what God has in store for his children is so much better than the alternative. The comforts of Babylon and everything in it won’t last.

We live in the City of Destruction. When the angels come to pull us out of here, will you have the desire to look back?

If you can only taste of His fruit. Taste of it and know that it is good. Everything else, as I’m certain eternity will prove, is counterfeit.