THE MANDELA EFFECT | WHEN THE SMITHSONIAN WAS STILL AN INSTITUTE 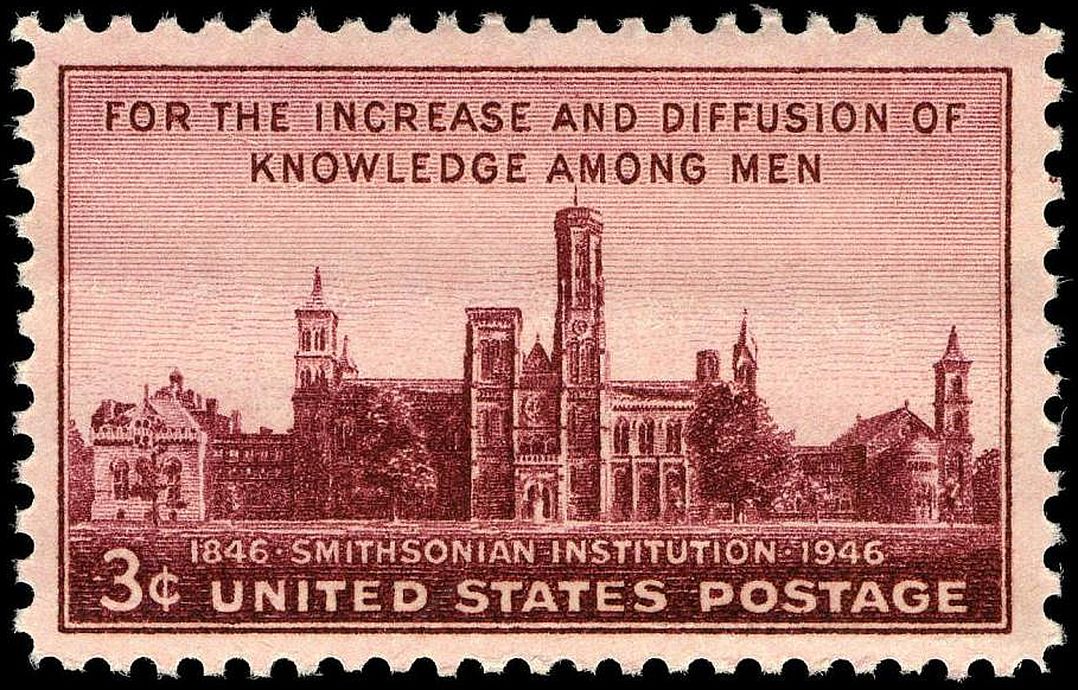 BEFORE MY GRANDFATHER DIED HE LEFT ME A SIZABLE PORTION of stamps from his own personal collection, each ranging the span of decades that made up the incredible years of his life. After contemplation on the matter, mainly what to do with them, I finally decided to make a collage of those stamps without damaging or threatening their integrity, which is now hung, framed, and comfortably preserved behind a wall of glass in our South Carolina home. There’s only one glaring problem with his collection. The 1946 3cent SMITHSONIAN stamp never said “INSTITUTION” on it, until now. I’m quite confident of that fact. I can read those letters from all the way across the room, and when I do it’s almost like pinpointing a black hole in space. What bothers me most, whenever I stare at it from across the room, is how it so often seems to stare back.

There’s clearly a huge difference between “Institute” and “Institution,” and I’m quite certain that many of you will immediately recognize that as such, further discerning this title swap as wrong through and through. But that’s the Mandela Effect for you. Even the definition of “Institution” has changed since I last looked it up in the dictionary last summer. Realities are changing around us, and there’s nothing we can do about it except to keep up to date with the alterations. The JESUIT SUN for its logo adds further antagonistic fuel to the conspirators fire. Uh-huh, Jesuit, as in the Church of Rome with Pope Francis as its pontiff. Is this the hidden secret in which the Mandela Effect is finally letting us in on, that we live in an institution and the Jesuits are behind the whole thing?

We’ve known for a very long time that the Jesuits were behind the whole thing. But I digress.

The swap from “Institute” to “Institution,” I believe, happened roughly one year ago, around April of 2016. That’s the best that any of us have so far come up with. For those of you who are having a difficult time understanding what the Mandela Effect is, it’s like this: From the time the Smithsonian was established in 1846 until some unspecified morning in 2016, with its many decades of celebrated publications and museums in Washington DC, termed “the nation’s attic” for its eclectic collection of 154 million items, the Smithsonian Institute, as we all knew it, simply became an Institution. Everything in history regarding its title changed, or rather was erased.  Even the stamp on my wall was effected by the alteration. And as of a month ago when I first sat down to research this article, there were no longer any records of it being an “Institute” on public record that I could find, save one.

The LIBRARY OF CONGRESS was the only known remaining data bank left in existence that still recognized the Smithsonian as the Institute so many of us properly remember. I was lucky enough to capture a screen shot. Kind of odd, don’t you think, that the Library of Congress of all data banks would spell the Smithsonian “Institute” wrong.

This would be what we call “residue.”

The thing is, and this isn’t talked about much, there’s one major glaring error when we observers of the Mandela Effect recognize it as a genuine phenomenon. As I see it, when we stumble upon residue that may be left behind after the “reprogramming in the Matrix” occurs (or whatever you want to call it), like the Library of Congress web page, pointing those bread crumbs or residue out on Google is basically just informing the architect behind all of this that the job hasn’t been finished yet! Quick, more re-coding in the Matrix! It’s almost like a cosmic game of chess, and by merely attempting to outsmart the machine by replicating its moves we only succeed in putting ourselves closer to checkmate.

See, this Library of Congress web page caught the excited attention of many in the Mandela Effect community about a month ago, perhaps too many, because as of today, when I visited the exact same page in order to write this article, well, see it for yourself.

Why the original LIBRARY OF CONGRESS page didn’t change, I can’t say. Maybe it will in time, as these things often do…..but not always. If you’re reading this it’s because you’ve stumbled upon the Mandela Effect, and the entire world is having technical difficulties. Or in the case of the Smithsonian, we’re all living in an Institution.