Let there be a firmament in the midst of the waters, Part Two

This is a follow up from my last post on the firmament and what this structure appears to be made from. In that post I suggested there are two possible elements: glass with an extremely high melting point and super-cool ice with unexplained vaporising qualities. I felt that there was more to discover still and hence this piece of research is sent your way to peruse.

The materials the firmament is made from is something which intrigues me as, whatever these elements are, they need to be incredibly strong. Looking at the following verse with further explanations on what is being written about here, reveals the necessity for a substantial and robust fabrication:

Behold, the heaven and the heaven of heavens is the Lord’s thy God, the earth also, with all that therein is. Deuteronomy 10:14

The Benson Commentary explains: The heaven —The aerial and starry heaven. The heaven of heavens — The highest, or third heaven, thus named for its eminence. While Gill’s Exposition of the Entire Bible tells us:

From what is described by Benson and Gill, we find that there are two types of heavens; the aerial starry one and the one where YHWH has His mighty throne [NB the first heaven is where we are on earth]. In Genesis Chapter one we read:

So, in the “heaven” the stars and sun/moon are set in place. Above this area is the “heaven of heavens” YHWH’s throne which is quite separate from the starry heaven. The firmament, let’s make this clear, is a heaven with the celestial lights within in but is also a separation form the heaven of heavens; meaning that the firmament is a barrier, yet houses the stars, sun and moon; an amazing structure by all accounts and exceedingly strong!

The elements I discussed in my last post, a strong unusual glass and a strange blue ice with extraordinary properties, would surely be efficient to do the job of supporting YHWH’s creation; the extremely high melting point of the Libyan glass could form part of the support to the throne as found in Revelation 4:6 and before the throne there was something like a sea of glass, like crystal; while the sky ice with its vaporising qualities could house the celestial bodies. (If you have not read my previous post, it might be an idea to do so). 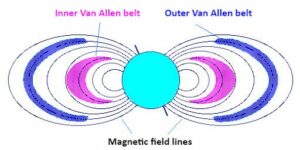 I am going to turn to a third possible element which could form part of the firmament; this is something I have been mulling over for quite some time now. But first I will revisit a previous post I published in The Unexpected Cosmology about the Van Allen Belts…

Researching these belts, the scientist James Van Allen discovered that the earth is surrounded by giant donut-shaped swaths of magnetically trapped, highly energetic charged particles. The radiation belts are not the only particle structures surrounding Earth. A giant cloud of relatively cool, charged particles called the plasmasphere fills the outermost region of Earth’s atmosphere, beginning at about 600 miles up and extending partially into the outer Van Allen belt. The particles at the outer boundary of the plasmasphere cause particles in the outer radiation belt to scatter, removing them from the belt. My conclusion was that here we find that what is known as the Van Allen Belts is purported to be a protective layer around the earth, shielding us from atmospheric danger from further afield; a bit like what we read about the firmament.

Furthermore, I recently discovered an article hidden away in the archives from 2014 which gives us some more intriguing details. The article from sci-news.com reads:

A group of researchers headed by Prof Daniel Baker of the University of Colorado’s Laboratory for Atmospheric and Space Physics has discovered a nearly impenetrable barrier some 11,500 km above our planet that blocks so-called ‘killer electrons,’ which can fry satellites and degrade space systems during intense solar storms…The new data from the Van Allen probes show that the inner edge of the outer belt (at roughly 11,500 km in altitude) is, in fact, highly pronounced. For the fastest, highest-energy electrons, this edge is a sharp boundary that, under normal circumstances, the electrons simply cannot penetrate.

“It’s almost like theses electrons are running into a glass wall in space. Somewhat like the shields created by force fields on Star Trek that were used to repel alien weapons, we are seeing an invisible shield blocking these electrons. It’s an extremely puzzling phenomenon,” said Prof Baker…“Nature abhors strong gradients and generally finds ways to smooth them out, so we would expect some of the relativistic electrons to move inward and some outward. It’s not obvious how the slow, gradual processes that should be involved in motion of these particles can conspire to create such a sharp, persistent boundary at this location in space,” he explained.

Ah, so there is purportedly some kind of barrier like a glass wall up in space. Just an aside here, so how did the Apollo spaceships manage to get through the Van Allen Belts exactly? Hmmm, I will leave you to make the connections and we will turn to another subject pertaining to the firmament and what it could be made of. 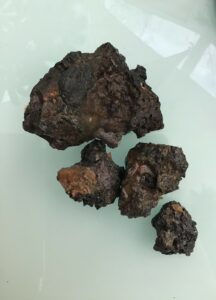 For quite some time I have been pondering on the subject of meteorites. To further my thoughts, I have been collecting meteorites from my garden. Let me explain. One evening about six years ago, my husband and I were standing outside when thud, my husband was struck on the head by something hard. When he looked down at the ground, he saw a large misshapen stone at which point I remarked that it looked like he had been struck by a meteorite. We both looked at the rock and then one of us, I am not sure which of us, remarked that it must have fallen from the firmament. After that I kept finding these misshapen rocks in the garden. One thing I will add here is that because I started to collect the rocks, diligently searching for them on a regular basis, I did not miss any but I soon realised that new pieces would be deposited around our somewhat small garden on a regular basis…so much so that I have now given up collecting them.

Researching meteorites, this is what science tells us according to Britannica.com: A meteor is the streak of light that you see in the sky when a small piece of cometary or asteroidal material enters the atmosphere at high speed and burns up because of the frictional heating from the piece’s collision with the atoms and molecules in the atmosphere. Before the small bit of comet or asteroid enters earth’s atmosphere, it floats through interplanetary space and is called a meteoroid. Most meteoroids that enter the atmosphere burn up completely as meteors. In some cases, however, the meteoroid does not completely burn up, and the object actually makes it to Earth’s surface. The chunk that has survived its fiery journey is called a meteorite. A small body starts its life as a meteoroid floating through space between the planets until it makes a bright streak of light in Earth’s atmosphere as a meteor and then, if it isn’t consumed by frictional heating, finally lands on the ground as a meteorite. 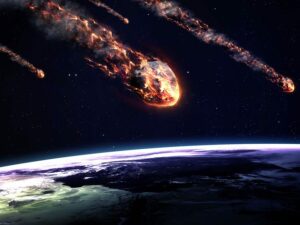 Now, I believe that what I have been collecting could be meteorites; they keep appearing in my garden and they are not dug up clinkers from the fireplace or pieces of builders’ rubble. However, in my research I have found that there are many types of meteorite and I thought it would be a good idea to include an image to show this: 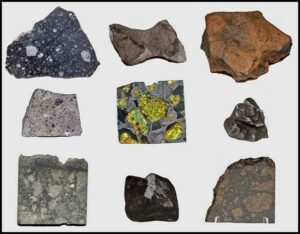 My meteorites may not be meteorites after all…but what are they? I read an article called Not Everything That Falls from the Sky Is a Meteorite by a writer from Washington University in St.Louis, and was left with an unanswered question “If it’s not a meteorite, what is it?” There was mention of achondrites which are pretty rare: these stony meteorites are made of the same minerals as terrestrial rocks. The igneous (mostly basaltic) achondrites (some eucrites, some diogenites, some lunar, and most martian) look just like their terrestrial counterparts. They are all formed by the same processes…Some brecciated achondrites contain iron-nickel metal, but not much, although in a few it can be seen on a sawn face or as rusty spots…only a few brecciated achondrites contain enough metal for the rock to attract a magnet.  It requires sophisticated (=expensive) chemical or mineralogic tests to identify a rock as an achondrite and to identify just which type of achondrite the meteorite is. 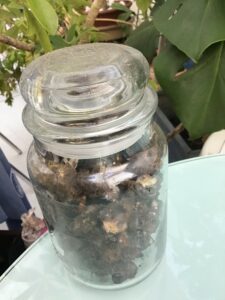 I really cannot be sure of what it is that keeps appearing in my garden and what it was that fell out of the sky and hit my husband’s head. So, at the end of my research, I may or may not have a collection of meteorites, but I do have a strong suggestion that whatever has been falling from the sky could have something to do with YHWH’s firmament…

By the word of the Lord the heavens were made, and by the breath of his mouth all their host. Psalm 33:6

It is he who made the earth by his power, who established the world by his wisdom, and by his understanding stretched out the heavens. Jeremiah 51:15