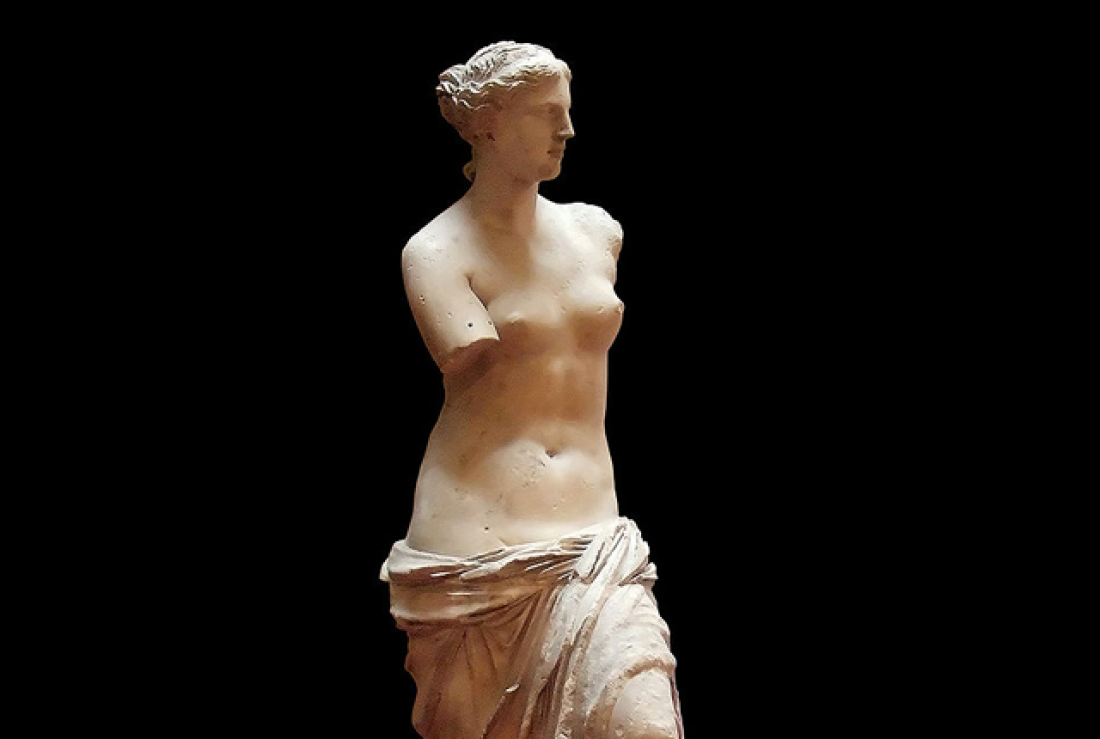 HEINRICH HEINE WAS NOT WELL. In May of 1848, the German-Jewish writer, known for his lyric poetry set to music by such composers as Schumann and Schubert, suddenly fell paralyzed. Heine would not recover. Further musings were confined to bed, a sickly pulpit for the pen which he dubbed his “mattress-grave,” where a cruel malady of the spine plagued him for the remaining eight years of his life.

During this final tenor—and even long before—the author confessed to his all-consuming love affair with marble statues and dead women. His greatest love was discovered in 1820, some three decades earlier, on the Greek island of Melos in the Aegean. It was Olivier Voutier, a 23-year-old ensign in the French navy, who witnessed the unexpected unearthing of Aphrodite by a farmer attempting to remove rocks from his field. The farmer apparently found absolutely no beauty in the goddess, either in classical or contemporary terms. Voutier had to pay him not to rebury her.

Aphrodite’s statue, known as Venus of Milo, quickly fell into the hands of Marquis de Rivière, French ambassador to the Sublime Porte of the Ottoman Empire, who presented it to Louis XVIII. In turn, the king of France donated the marble goddess to the Louvre the following year. This masterwork of the late Hellenistic-era, once adorned with succulent jewelry, won instant fame. Standing before her in the Louvre, one couldn’t help but speculate at her missing arms, which may have at one time held an apple, a crown, or a mirror by which she admired her reflection, and be all the more drawn to her. Perhaps it was that, her divine mystery, counterbalanced by her association with eroticism and beauty, as her half-nakedness testified to—her sensual, feminine curves, and inviting drapery—which effortlessly clapped the eyes of countless souls upon her. Or as Gregory Curtis, author of Disarmed: The Story of Venus de Milo put it: “The statue is beautiful in a way that even an untrained eye immediately understands.”

Despite the ongoing conflict between the ancient pagan and the Christian world, Homer, Virgil, and Ovid were largely unharmed by the church—perhaps because Rome itself was Hellenized. In Heine’s writings however, the Pope of Rome would grant no forgiveness of sin for his unrepentant adoration of Venus. She was the devil, adorned with beautiful claws.

It was in the Louvre where—upon visiting Venus one final and momentous time—Heine burst into tears.

ON THE FORTNIGHT OF HIS OWN DEATH, the troubled words which spilled from Heine’s pen recounted a rather recent dream.  Heine described a dead man. Specific to his disturbances, he was the man. The poet saw himself lying in an open sarcophagus, the kind one might find in a museum, associated with Egypt, Greece, or Rome, and surrounded by shards of broken sculpture. This particular funeral receptacle however was clearly Hellenized, like the statue of his devotion, as it was decorated with scenes depicting both classical mythology and the Hebrew Old Testament. Suddenly, and perhaps not so quite out of the ordinary (when one stops to ponder his frequented conversations with stone), bitter and quarrelsome voices broke his silence of rest. To this effect Heinrich wrote:

“Oh, the argument will never end.

Always will Truth quarrel with Beauty.

The human host will always split

In two halves: Greeks and the Barbarians.”

His poem, titled “For Mouche,” would prove his last.

28 years later, after Madame Heine’s own passing, his dear friend Camille Selden recounted another troublesome irregularity surrounding his death. “On that Sunday – February 17th 1856,” she wrote, “I had a strange waking.” As the eight o’ clock hour dawned, she heard a noise in her room, “a sort of fluttering, such as that produced on summer evenings by the wings of nocturnal butterflies which come in through the open window and search desperately for an exit.” She then opened her eyes, but just as suddenly closed them, for “in the first glimmerings of day, a black form was writhing, like a gigantic insect and seeking some way of escape.”

Despite the winter cold, Madame Selden hastened through Parisian streets to his home. But the poet who had intimately named her Mouche was already dead.  He had passed, she said, recounting her terrible waking vision of the tormented spirit, somewhere between 5 and 8 o’clock in the morning.

Continue to part 2: Truth or Beauty…? Saint Jerome: Sacred Souls Severed by the Pagan and Profane