Ships at Sea: Perspective Laws | The Earth Not a Globe Review, October 1893

Cosmology | Featured | Newspapers of Our Realm

WE have already given proofs that the earth we live on is an extended plane; and one good practical proof of this is quite sufficient to discredit all the so-called proofs of the earth’s sphericity. The practical surveying of the surface of water proves that it is level; and if the surface of canals, rivers, and seas is level, then the earth must be a plane. We begin with practical proofs; but, on the other hand, our opponents begin by first assuming the earth is a globe, and then looking about for some phenomena to support that assumption. This is not scientific; yet it is the way of our best astronomers. They first assume, and then try to support their assumptions.

That which is most relied on by the Newtonians to prove the earth and sea to be globular is the phenomenon of the disappearance of ships at sea. The hull of a vessel generally disappears first, and when it does so it is quietly assumed that the hull has gone down behind a hill of water. That this is a fallacy may often be proved by applying a good telescope, when, in clear or calm weather the hull may be brought again into view. This shews that other causes than the one imagined operate to cause the disappearance of the lower part of a vessel before the sails etc., in the upper part are lost to view. We will mention some of these causes; and first and foremost, we shall offer some remarks under the heading of—

It is a well-known law of perspective that parallel lines when produced far enough appear to meet. This may frequently be seen on our railways. Now if the earth be a plane with the heavens outstretched above it, they ought in the distance to appear to meet. They do so appear to meet, everywhere in the horizon however distant; therefore, the earth and sea form a vast extended and circular plane. The disappearance of ships at sea can be explained, and can only be explained, in harmony with these facts, and the laws of true perspective.

And, thirdly, all objects ultimately vanish in this line of sight, which appears to be on a level with the eye, in what is called the vanishing point; and those objects which are above the eye never fall below the line of sight, and those objects which are below the eye never seem to rise above it. Now let us apply these laws of perspective by referring to the following diagram, illustrating the disappearance of a vessel a t sea.

Let A B represent the line of sight, or the height of the horizon, which is always on a level with the eye of the spectator, in whatsoever position or altitude he may place himself.

In this position it will be noticed that the eye of the spectator is nearer to the level of the hull than it is to the height of the ships flag. This is a common position. Then according to the laws of perspective, the line C B being above the eye will seem to descend to a level with the line of sight A B, and the line D E will appear to rise up to it, both getting lost somewhere in it in the distance. But here we must point out a very common error. It is generally supposed that all such lines vanish at the same point; but they do not. It depends upon their position. If a man were to place his eye eight inches above the ground, he would expect to see nothing lying on the ground beyond one mile; but if a large balloon were floating one mile high it would be visible many miles distant. A wheel eight inches high running on the ground would vanish much earlier than a balloon a mile high; yet both would vanish on, or before, reaching the same horizon, or line of sight. The higher an object is the longer it will remain in sight, as the distance increases between it and us; and the lower or smaller an object is and the sooner it will reach its proper vanishing point. The same rule applies to objects receding below the eye, or line of sight. Now if the angle A E D be less than the angle A B C, as in this case it is, it is evident that this angle A E D, with all that is contained in it, must be lost to view, or reach the vanishing point, before the larger angle A B C and that which it contains. In other words, the line D E meets the line A B, in the vanishing point E, before the line C B which vanishes further off in the point B, its point of contact with the line of sight A B. So that the hull of a vessel in this position would naturally be lost to view before the upper part of the sails or the flag of the ship had disappeared. In calm weather, on the application of a powerful telescope, this angle would be magnified, and so the hull of the vessel would reappear, which it could not possibly do if it had gone down behind a hill of water. The vessel would be found hull-up rather than “hull-down.” Thus, perspective alone would account for a vessel appearing what has been mistakenly called “hull-down.”

Other causes often operate to hide the hull of a vessel before the ship’s flag and masts are hidden from view. When the weather is clear the sails and the flag can be seen more easily because they are against a background of clear sky; whilst the hull of the vessel is down, and generally below the eye, in a darker and thicker element surrounded by the spray and splash consequent upon sailing. All this has a tendency to hide the lower parts of a vessel first and to display the upper parts last; yet no note is taken of these things in astronomical works. No! Their theory requires the vessel to have gone down behind a hill of water, and other possible causes of the hull’s disappearance are never so much as hinted at. If the whole vessel were much below the spectator’s horizon, then the whole of the ship would vanish before reaching up to the line of sight. Under such circumstances it could not possibly be “hull-down.”

In astronomical works we have frequently seen the laws of perspective grossly violated. For instance, a spectator is placed on high, sometimes two or three hundred miles; and, instead of his line of sight being a tangent to the sphere at the point of observation, he is made to look down to his horizon. Such a view is never found necessary in Nature; nor is it possible on a plane. The ship is placed a little way from the top of the illustrated globe; then the hull is brought up from below the spectator’s horizon to the top of the globe and above his horizon, and afterwards it is made to sink down behind the supposed hill of water or curve. This is simply an outrage upon Nature, and upon all true science and perspective as might be shewn by making another vessel sail away in the opposite direction. This vessel would have to begin to descend at once!

Let us refer again to our diagram. Objects below the line of the horizon A B never rise above it; so that if a ship’s hull be below the eye as starting out it will, though seeming to rise higher and higher, forever remain below, as long as the spectator occupies the same position, until the hull is lost on or before reaching the line A B. This can be tested by anyone with the requisite amount of patience to watch. But if the earth were a globe according to the diagrams of the astronomers, the hull of a vessel though below the eye line would first rise above it on the horizon and be seen against a clear sky in the distance; and then afterwards the hull would go down beyond the horizon. But it does not behave so; therefore, the earth is not a globe. If below the line of sight, the hull disappears before, or vanishes on, reaching the eye-line, and never gets above that line at all. This, according to the laws of perspective, is just what ought to happen on a plane; it does so happen; therefore, the earth and sea form a plane, and the sea is really level. Thus, the phenomena of the disappearance of ships at sea when carefully examined prove the very opposite of what they are generally supposed to prove.

Before concluding this article, we would like to ask our astronomical friends a few questions on this subject. In the diagrams of ships at sea, given in astronomical works, Why are the ships placed near the top and not under? Why is the first ship not placed on the top? Why near the top, and always having to go up first and then to go down afterwards? Has any object in Nature, ever been seen to rise perspectively as it recedes, and then while remaining at the same altitude, to descend? By whom? Where? and When? Is not the observer always on the top of the earth? If not, why not? If the earth were a globe, would not the horizon be a tangent to the sphere at the point of observation? If so, ought not a ship to begin to descend at once as soon as it leaves the observer? Why does a vessel not suit its behavior to the globular theory? Is it because it is only a theory? Why do the astronomers violate the laws of perspective when they make diagrams of ships at sea? And now, when these tricks of so-called astronomical “science” are exposed, why should not all our readers believe the plain truth that the earth and sea form one vast outstretched and circular plane?

The Earth Not a Globe Review: Volume I

is available for sale in our bookstore. 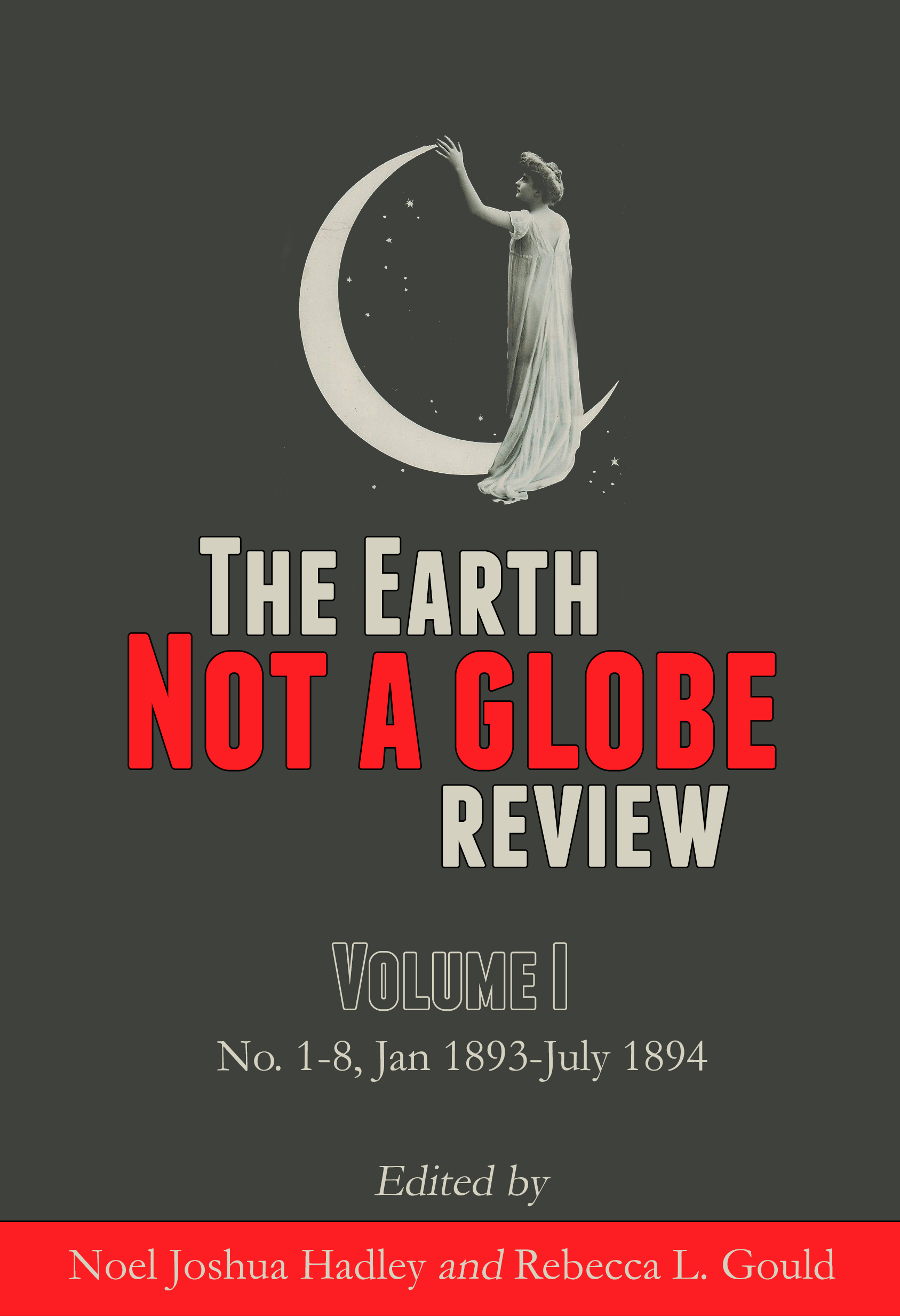