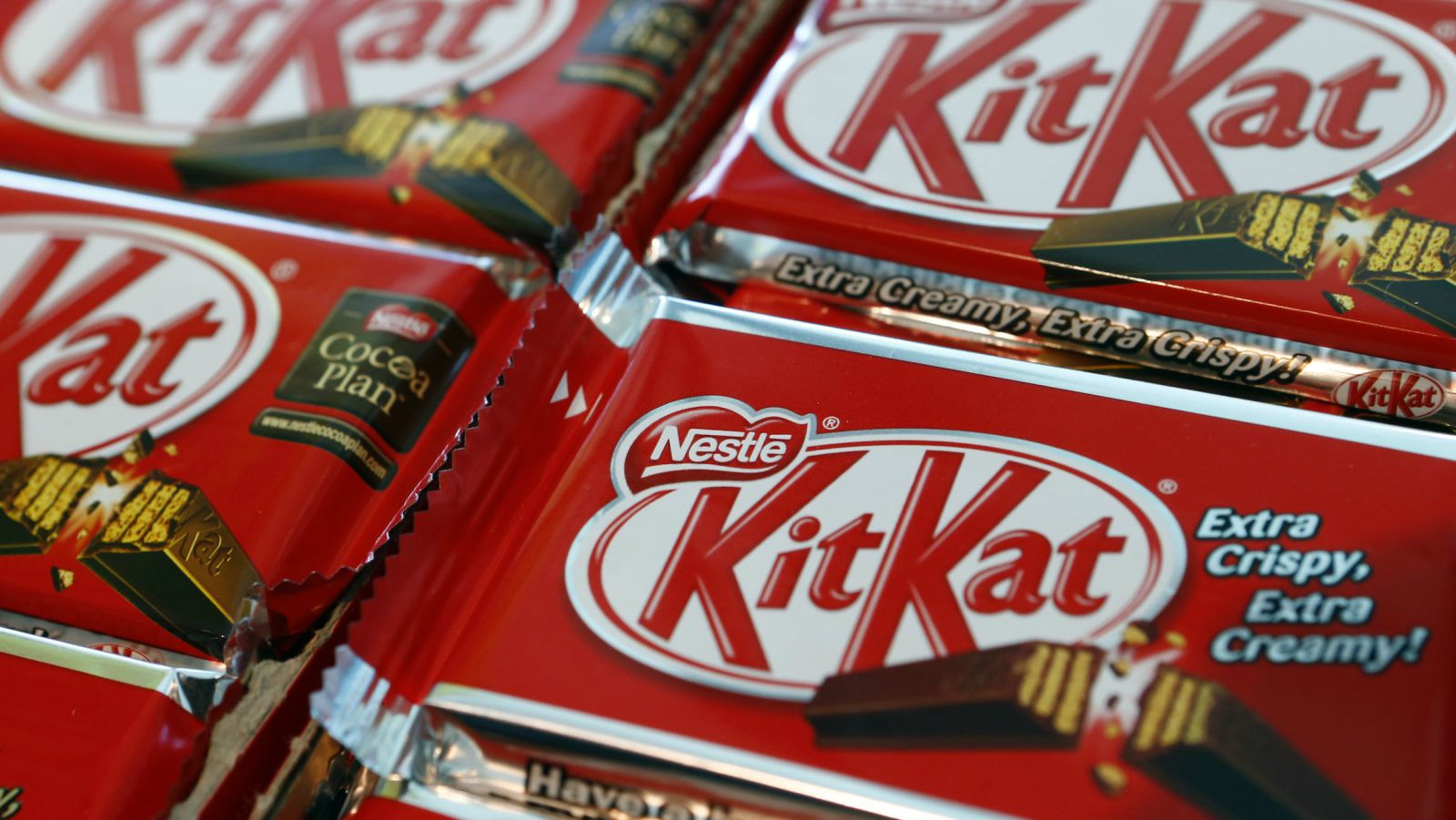 I haven’t, because then I’d sound like a crazy mad man.

See, the problem with Kit Kat, as the spelling of logos go, is that it’s flipped back and forth between Kit Kat, without a dash, and Kit-Kat, with a dash, all in real time and in a maddening game of Sanity Ping Pong. This is the stuff that I pay attention to.

In which I’ll tell her, with the wide eyes of a completely sane person, “AH-HA! That’s where YOU ARE WRONG! It’s because this is yet another example of the MANDELA EFFECT, and it’s very R-EEEEE-AAAAA-L!”

That’s just the thing. On any given day, week, or month of the year I’ll be standing here in the check-out aisle of the Piggly Wiggly with my twin sons and I’ll see Kit-Kat spelled with a dash. I’ll immediately return home with my twin sons, seek Google’s wisdom, and everything about recorded history will tell me it’s always and only been spelled with a dash.  Of course, there will be some guy in a chat room somewhere asking the question, Did anyone see Kit Kat become Kit-Kat again? In which hundreds of other’s, including myself, will be like, Um, yeah, it happened for me too, and I just let the grocery clerk in on it.

On any other given day, week, or month of the year, I’ll be standing in this exact same check-out aisle of the Piggly Wiggly with my twin sons and I’ll try to convince myself not to take a peak at the candy display, but when I do, Kit Kat is spelled without a dash, like today. I’ll immediately return home with my twin sons, surf the web with purpose, and do you know what I’ll find? Everything about recorded history will tell me it’s always and only been spelled without a dash, and that internet conversation I had earlier, It’s been erased. How much do you want to bet there will be the same guy or some other guy in a chat room somewhere asking the question, Did anyone see Kit-Kat become Kit Kat again?

Oh, and if you agree with a hundred-thousand other observers that it’s changed from Kit Kat to Kit-Kat or back to Kit Kat from Kit-Kat, then you too are a crazy mad man, according to internet trolls.

I was pushing this grocery cart down the cereal aisle of the Piggly Wiggly a few minutes ago and my twin sons pointed towards a box of Froot Loops. So I threw the box of Froot Loops in the cart, remembering when Froot Loops was spelled Fruit Loops, and before that, when it was Froot Loops, and still before that, when it was Fruit Loops again. Why do brand names keep changing? And why does all of recorded history keep changing with it, including that eighties commercial of the kid eating a bowl of Fruit Loops or Froot Loops, whatever history presently calls it today. Should I also let the grocery clerk in on the fact that, not so long ago, Febreze was spelled with a second “e”? There’s one on every aisle, and guys like me in every check-out stand.

And another thing. A little over a year ago I was standing here in the Piggly Wiggly and I clearly recall seeing an article on a certain presidential candidate, Hilary Clinton, spelled with only one “L,” and thinking, Huh, that’s strange, they misspelled her name. Except then I made the mistake of going to Google, after I took the twins home and turned the television on, and learned that Hilary Clinton had always been spelled with one “L” by all media sources, and even by her own followers, until maybe a month later when I was here at the check-out stand in the Piggly Wiggly  and took note of the fact that she had reverted back to Hillary Clinton in the tabloids. Google, I was certain, would follow this example. All was good with the world again.

Maybe I should just stop shopping at the Piggly Wiggly, I don’t know.

One thing’s for certain. When I finally pay for my Froot Loops and Febreze and Kit Kat bar at the check-out stand of the Piggly Wiggly and take my sons home to seek out that guy in the internet chat room who assures me I’m not the only one, I won’t be turning Mr. Rogers’ Neighborhood on for the twins. Remember when Mr. Rogers’ used to sing: It’s a beautiful day in the neighborhood? The lyrics have changed now, straight from Fred Rogers’ mouth, to: “It’s a beautiful day in THIS neighborhood,” in every single episode. All is not right with the world again.

Really, there’s no escape from it. A few months ago, my wife and I took the twins on a trip to the Smithsonian in Washington DC only to learn that the Smithsonian Institute, which I’ve grown up with and visited at least two dozen times before this Mandela Effect debacle grabbed guys like me by the neck, is now the Smithsonian Institution, also with a Jesuit sun for its logo. Let me tell you something, there’s a huge difference between an institute and institution. Are the Jesuits in on this? Are they letting us know that we really live in a loony bin?

Even if I don’t wave this Kit Kat bar above my head, shouting at the grocery clerk like a crazy mad man, “IT’S CHANGED AGAIN! IT’S CHANGED AGAIN!” I figure they must know something is off, even if it’s in the trash compactor of their subconscious. You know, that bad feeling we sometimes get in the gut, as if the very shadows in our peripheral vision are curving against the natural angles of the sun. How often do we try and push down and suppress those abnormalities until it either no longer exists or we no longer have to make a deal, whichever comes first?

As soon as I leave the Piggly Wiggly I think I’ll avoid Google and Mister Rogers altogether and take the twins to Chic-Fil-A for lunch, I mean Chick-Fil-A, as it’s spelled now with a “k”. Seriously, it used to be Chic-Fil-A, no “k.” I have that experience firmly implanted in my childhood memory. Everything’s changing, and at such dizzying speeds. Funny thing is though (and I can’t help but wonder if so many other realities will follow suite), I’ve seen Kit Kat ping pong back and forth between a dash and without its dash so often now that I can no longer recall whether it originally had a dash or no dash at all.