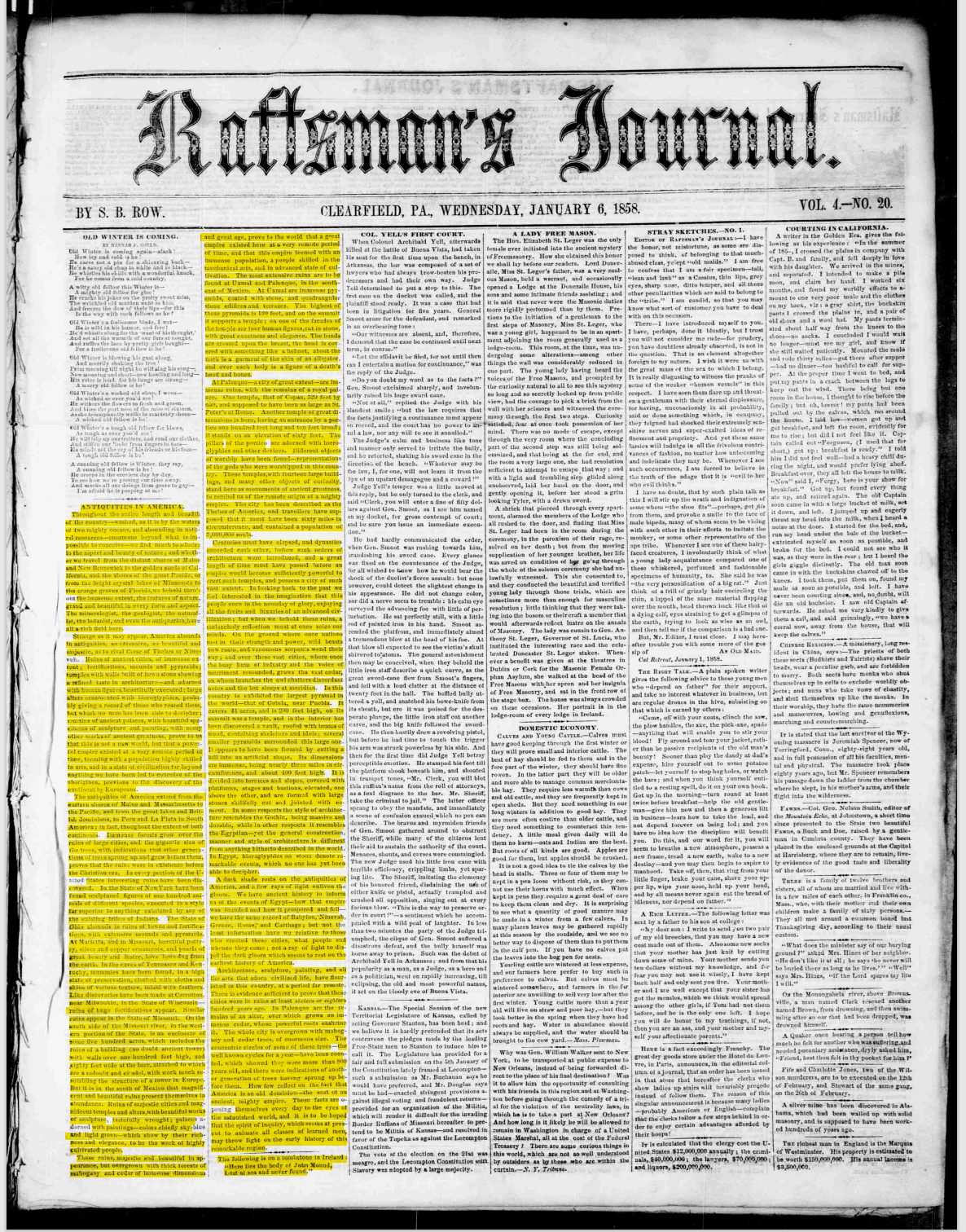 THE AUTHOR of ‘Raftman’s Journal’ is identified as a certain S.B. Row. The address of his article derives from Clearfield, PA, and is dated to January 06, 1854. That’s all I’ve got at the moment. Not sure if we’re dealing with a Freemason dropping breadcrumbs or a genuine Truth seeker. I’m guessing the former, but you never really know. It’s a phenomenal read though, as mud flood research goes. Let me know your thoughts.

You can download the original article here. 1858 Antiquities in America

Throughout the entire length and breadth of the country—washed, as it is by the waters of two mighty oceans, and abounding in natural resources—enormous beyond what is impossible to conceive—we find much to admire in the aspect and beauty of nature ; and whether we travel from the distant shores of Maine and New Brunswick to the golden sands of California, and the shores of the great Pacific, or from the bright crystal lakes of Minnesota to the orange groves of Florida, we behold throughout the immense extent, the features of nature, grand and beautiful in every form and aspect. The mineralogist, the geologist, the naturalist, the botanist, and even the antiquarian, have all a rich field here.

Strange as It may appear, America abounds in antiquities, so extensive, so beautiful and majestic, as to rival those of Thebes or Nineveh. Ruins of ancient cities, of immense extent ; fortifications, mounds and pyramids ; temples with walls built of hewn stone showing a refined taste in architecture—and adorned with human figures beautifully executed ; large alters ornamented with hieroglyphics, probably giving a record of those who reared them, but which no man has been able to decipher ; remains of ancient palaces, with beautiful specimens of sculpture and painting, with many other marks of ancient greatness, prove to us that this is not a new world, but that a powerful empire existed at a very remote period of time, teeming with a population highly skilled in arts, and in a state of civilization far beyond anything we have been led to conceive of the aborigines, previous to the discovery of the continent by Europeans.

The antiquities of America extend from the eastern shores of Maine and Massachusetts to the Pacific, and from the great lakes and British dominions, to Peru and La Plata in South America ; in fact, throughout the extent of both continents. Immense forests grow over the ruins of large cities, and the gigantic size of the trees, with indications that other generations of trees sprung up and grew before them, proves that the ruins were in existence before the Christian era. In every portion of the United States interesting ruins have been discovered. In the State of New York have been found sculptured figures of one hundred animals of different species, executed in a style far superior to anything exhibited by any of the existing tribes of Indians. The State of Ohio abounds in ruins of towns and fortifications, with extensive mounds and pyramids. At Marietta, and in Missouri, beautiful pottery, silver and copper ornaments, and pearls of great beauty and lustre, have been dug from the earth. In the caves of Tennessee and Kentucky, mummies have been found, in a high state of preservation, clothed with cloths and skins of various texture, inlaid with feathers. Like discoveries have been made at Carrolton, near Milwaukie, in the State of Wisconsin—ruins of huge fortifications appear. Similar ruins appear in the State of Missouri. On the south side of the Missouri river, in the western portion of the State, is an enclosure of some five hundred acres, which includes the ruins of a building (no doubt ancient tower) with walls over one hundred feet high, and eighty feet wide at the base, attached to which are a redoubt and citadel, with work much resembling the structure of a tower in Europe. But it is in the south of Mexico that magnificent and beautiful ruins present themselves in abundance. Ruins of majestic cities and magnificent temples and altars, with beautiful works of sculpture, tastefully wrought ; palaces with paintings—colors chiefly sky-blue and light green—which show by their richness and elegance, to be the work of highly cultivated people.

These ruins, majestic and beautiful in appearance, but overgrown with thick forests of mahogany and cedar of immense dimensions and great age, prove to the world that a great empire existed here at a very remote period of time, and that this empire teemed with an immense population, a people skilled in the mechanical arts, and in advanced state of cultivation. The most extensive ruins are to be found at Uxmal and Palenque, in the southeast of Mexico. At Uxmal are immense pyramids, coated with stone, and quadrangular stone edifices and terraces. The highest of these pyramids is 130 feet, and on the summit it supports a temple ; on one of the facades of the temple arc four human figures, cut in stone, with great exactness and elegance. The hands are crossed upon the breast, the head is covered with something like a helmet, about the neck is a garment of the skin of an alligator, and over each body is a figure of a death’s head and bones.

At Palenque—a city of great extent—are immense ruins, with the remains of a royal palace. One temple, that of Copan, 520 feet by 650, and supposed to have been as large as St. Peter’s at Rome. Another temple of great dimensions is here, having an entrance by a portico one hundred feet long and ten feet broad ; it stands on an elevation of sixty feet. The pillars of the portico are adorned with hieroglyphics and other devices. Different objects of worship have been found—representations of the gods who were worshipped in this country. These temples, with fourteen large buildings, and many other objects of curiosity, stand here as monuments of ancient greatness, to remind us of the remote origin of a mighty empire. The city Las been described as the Thebes of America, and travelers have supposed that it must have been sixty miles in circumference, and contained a population of 3,000,000 souls.

Centuries must have elapsed, and dynasties succeeded each other, before such orders of architecture were introduced, and a great length of time must have passed before an empire would become sufficiently powerful to erect such temples, and possess a city of such vast extent. In looking back to the past we feel interested in the imagination that this people once in the noonday of glory, enjoying all the fruits and luxuries of an advanced civilization ; but when we behold these ruins, a melancholy reflection must at once seize our minds. On the ground where once nations met in their strength and power, wild beasts now roam, and venomous serpents wend their way ; and over these vast cities, where once the busy hum of industry and the voice of merriment resounded, grows the vast cedar, on whose branches the owl chatters discordant notes and the bat sleeps at meridian. In this country is exhibited the largest pyramid in the world that of Colula, near Puebla. It covers 41 acres, and is 200 feet high, on its summit was a temple, and in the interior has been discovered a vault, roofed with beams of wood, containing skeletons and idols; several smaller pyramids surrounded this large one It appears to have been formed by cutting a hill into an artificial shape. Its dimensions are immense, being nearly three miles in circumference, and about 400 feet high. It is divided into terraces and slopes, covered with platforms, stages and bastions, elevated, one above the other, and are formed with large stones skillfully cut and jointed with cement. In some respects the style of architecture resembles the Gothic, being massive and durable, while in other respects it resembles the Egyptian yet the general construction manner and style of architecture is different from anything hitherto described in the world In Egypt, hieroglyphics on stone denote remarkable events, which no one has yet been able to decipher.

A dark shade rests on the antiquities of America, and a few rays of light enliven the gloom. We have ancient history io inform us of the events of Egypt—how that empire was founded and how it prospered and fell—we have the same record of Babylon, Nineveh Greece, Rome and Carthage ; but not the least information have we relative to those who erected these cities, what people and whence they came ; not a ray of light to dispel the dark gloom which seems to rest on the earliest history of America.

Architecture, sculpture, painting, and all the arts that adorn civilized life, have flourished in this country, at a period far remote. There is evidence sufficient to prove that these cities were in ruins at least sixteen or eighteen hundred years ago. In Palenque are the remains of an altar, over which grows an immense cedar, whose powerful roots enshrine it. The whole city is overgrown with mahogany and cedar trees, of enormous size. The concentric circles of some of these trees—the well known cycles for a year—have been counted, which showed they were more than 800 years old, and there were indications of another generation of trees having sprung up before them. How few reflect on the fact that America is an old dominion—the seat of an ancient, mighty empire. These facts are themselves every day to the eyes of the astonished world, and it is to be hoped that the spirit of inquiry, which seems at present to animate all classes of learned men, may throw light on the early history of this remarkable region. 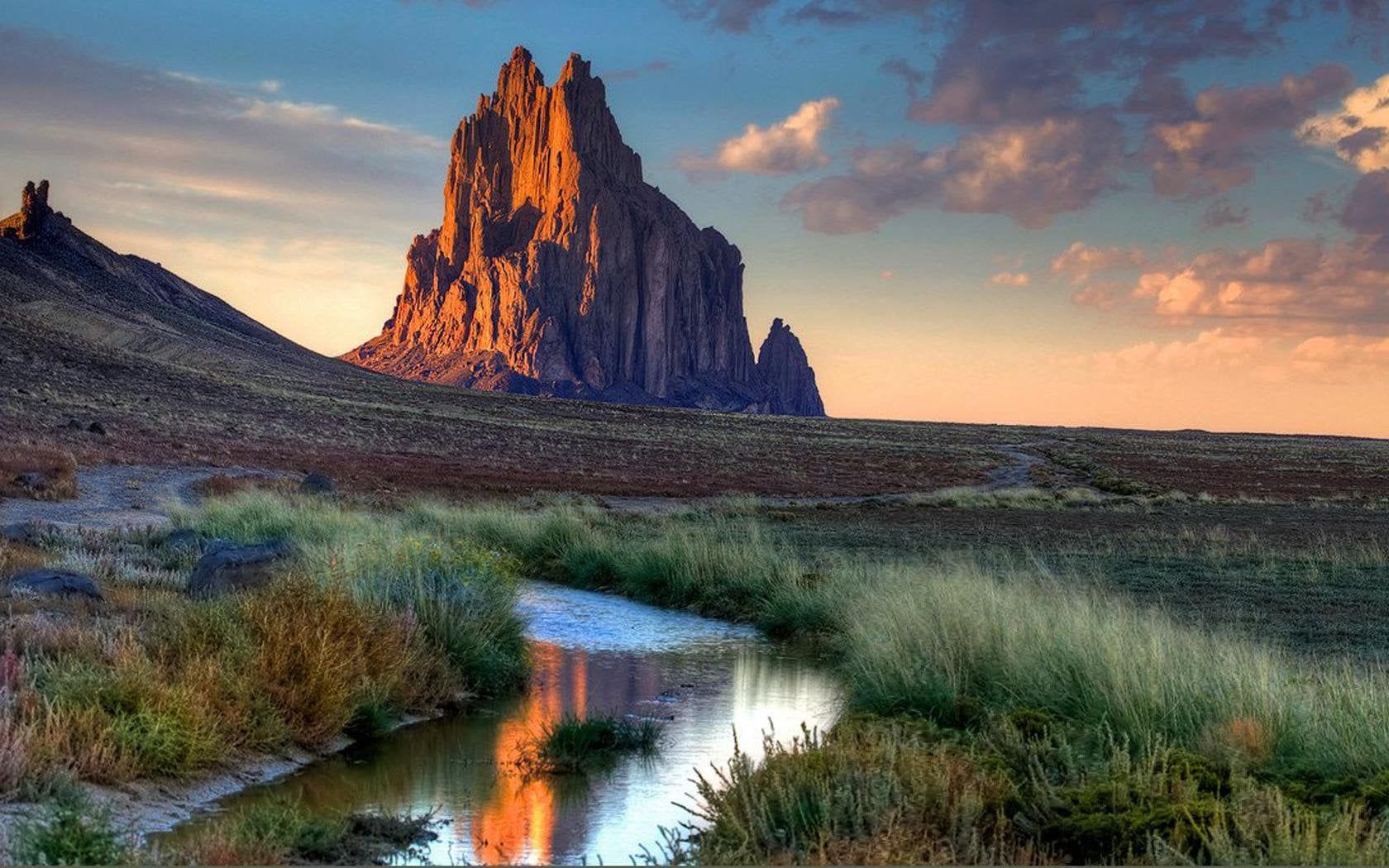