Who is the false messiah?

Two of the most prolific books in Scripture that talk about the false messiah are Daniel and Revelation. These two books tell us many things about his character. Let’s look at some of these particular verses from these two books. They tell us that he will be very intelligent, a charismatic speaker, a crafty politician, controlling, proud, and a blasphemer.

I considered the horns, and, behold, there came up among them another little horn, before whom there were three of the first horns plucked up by the roots: and, behold, in this horn were eyes like the eyes of man, and a mouth speaking great things.

And the strength of the covenant multiplies for one week: and in the middle of the week, the sacrifice and the oblation cease, and upon the end, abominations destroy, until the consummation is determined and poured over the desolation.

And the ten horns which you saw are ten kings, which have received no kingdom as yet; but receive power as kings one hour with the beast. These have one mind, and shall give their power and strength unto the beast.

And he opened his mouth in blasphemy against YAHUAH, to blaspheme his name, and his Tabernacle, and them that dwell in heaven.

And he shall speak great words against EL ELYON, and shall wear out the qodeshiym of EL ELYON, and think to change times and laws: and they shall be given into his hand until a period of time and times and the dividing of time.

And of the ten horns that were in his head, and of the other which came up, and before whom three fell; even of that horn that had eyes, and a mouth that spoke very great things, whose look was more stout than his fellows. 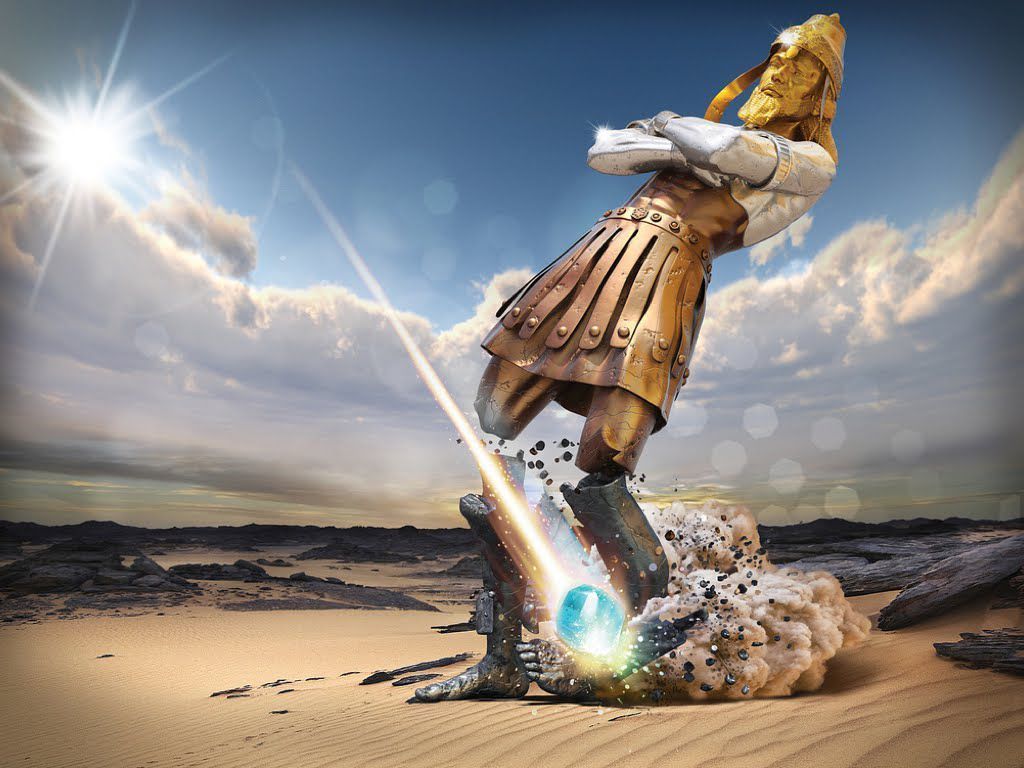 From these particular verses we can observe a few key things about the false messiah. We see that he is supposed to come up from a group of ten kingdoms. Three get plucked up and replaced with one. Has there been something like this happen in history that explains this? Well yes, there has, but first we have to look at something else in Daniel. Nebuchadrezzar’s dream.

You, O king, saw, and behold a great image. This great image, whose brightness was excellent, stood before you; and the form thereof was terrible. This image’s head was of fine gold, his breast and his arms of silver, his belly and his thighs of brass, His legs of iron, his feet part of iron and part of clay. You saw till that a stone was cut out without hands, which smote the image upon his feet that were of iron and clay, and broke them to pieces. Then was the iron, the clay, the brass, the silver, and the gold, broken to pieces together, and became like the chaff of the summer threshingfloors; and the wind carried them away, that no place was found for them: and the stone that smote the image became a great mountain, and filled the whole earth.

Nebuchandrezzar’s statue breaks down into four sections: Gold, Silver, Brass and Iron. Furthermore, we see this broken down into the four beasts of Daniel 7. Each one of these relates to a particular beast. Let’s take a look.

Daniy’el spoke and said, I saw in my vision by night, and, behold, the four winds of the heavens strove upon the Great Sea. And four great beasts came up from the sea, diverse one from another. The first was like a lion, and had eagle’s wings: I beheld till the wings thereof were plucked, and it was lifted up from the earth, and made to stand upon the feet as a man, and a man’s heart was given to it. And behold another beast, a second, like to a bear, and it raised up itself on one side, and it had three ribs in the mouth of it between the teeth of it: and they said thus unto it, Arise, devour much flesh. After this I beheld, and lo another, like a leopard, which had upon the back of it four wings of a fowl; the beast had also four heads; and dominion was given to it. After this I saw in the night visions, and behold a fourth beast, dreadful and terrible, and strong exceedingly; and it had great iron teeth: it devoured and broke in pieces, and stamped the remnant with the feet of it: and it was diverse from all the beasts that were before it; and it had ten horns. I considered the horns, and, behold, there came up among them another little horn, before whom there were three of the first horns plucked up by the roots: and, behold, in this horn were eyes like the eyes of man, and a mouth speaking great things. I beheld till the thrones were cast down, and the Ancient of Days did sit, whose garment was white as snow, and the hair of his head like the pure wool: his throne was like the fiery flame, and his wheels as burning fire. A fiery stream issued and came forth from before him: a thousand thousands ministered unto him, and ten thousand times ten thousand stood before him: the judgment was set, and the cepheriym were opened. I beheld then because of the voice of the great words which the horn spoke: I beheld even till the beast was slain, and his body destroyed, and given to the burning flame. As concerning the rest of the beasts, they had their dominion taken away: yet their lives were prolonged for a season and a period of time.

The Gold is the Lion, the Silver is the Bear, the Brass is the Leopard, and the Iron a mystery beast with 10 horns. 10 horns? 10 horns are 10 kingdoms. But lets go over the first three beasts. The first represents Babylon, the second is Medo-Persia, the third is Greece and the fourth and final one is none other than Rome. The very Rome that crucified our messiah. This fourth beast breaks into 10 horns, 10 kingdoms. When Rome fell it was divided into 10 kingdoms when it fell. After it fell, one horn rose up and took control of Europe, the papacy. When the papacy took over, three horns or kingdoms were uprooted and completely wiped out.

The third point is that the little horn is a little kingdom. This is again found in Daniy’el 7:8. The papacy has a kingdom which is the smallest country in the world called the Vatican. This is based in Rome, Italy. It is its own country/kingdom and is the smallest one in all the world.

The fourth point is that the little horn is smaller and different from the ten other horns as found in Daniel 7:24. It is different as it combines political and religious power. It came to be by plucking up three other horns as found in Daniy’el 7:8. This actually happened after the papacy was founded. These three kingdoms that were wiped out do not exist anymore and they are the Heruli, the Vandals, and the Ostrogoths. All three of these kingdoms were completely destroyed and do not exist today. These kingdoms opposed the papacy’s teaching, which included the false teaching of the trinity. So because of this, the papacy completely destroyed them.

The fifth point is that Daniy’el 7:25 tells that the little horn speaks against Yahuah. It boasts and speaks blasphemy. It speaks against the saints for a time, times and half a time. This is because the little horn persecuted believers in messiah for 3.5 years or 1260 prophetic days. Now is scripture we know that one day in prophecy is as 1 year. So the 1260 days becomes 1260 literal years. This is established in Ezekiel 4:6. The papacy reigned for 1260 years unchallenged from its establishment in 538 AD to 1798 AD. During this time, anyone who questioned her power and authority was executed. They executed 10’s of millions of people.

And the final point is that the little horn thinks to change times and laws. The papacy has changed Yahuah’s set times and laws. This is perfectly personified how the papacy changed the seventh day sabbath to the first day to worship the sun. They also did this by taking out the 2nd commandment of not making idols and to have ten they took the tenth commandment about not coveting and broke it into two. Do not covet your neighbors possessions and do not covet your neighbors wife. There are many other things they did but I feel these prove the point. 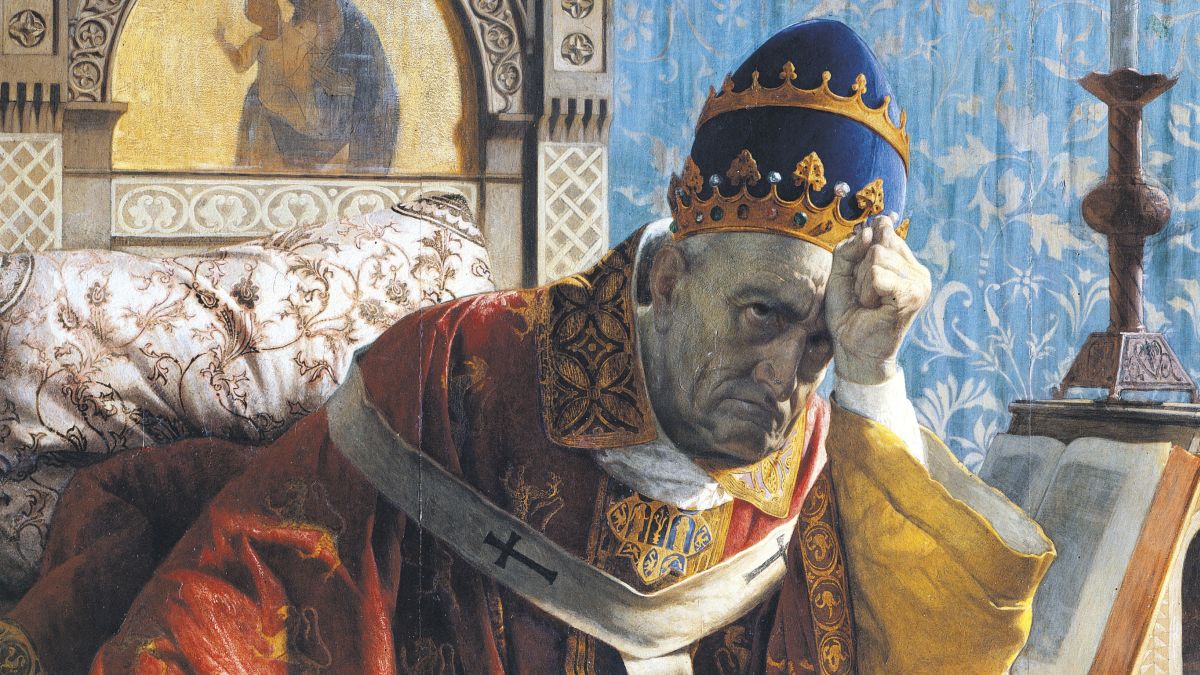 David Weems lives a modest life with his wife and five children. He resides in southern Illinois and is a devout follower of The Way.

He can be reached at [email protected]