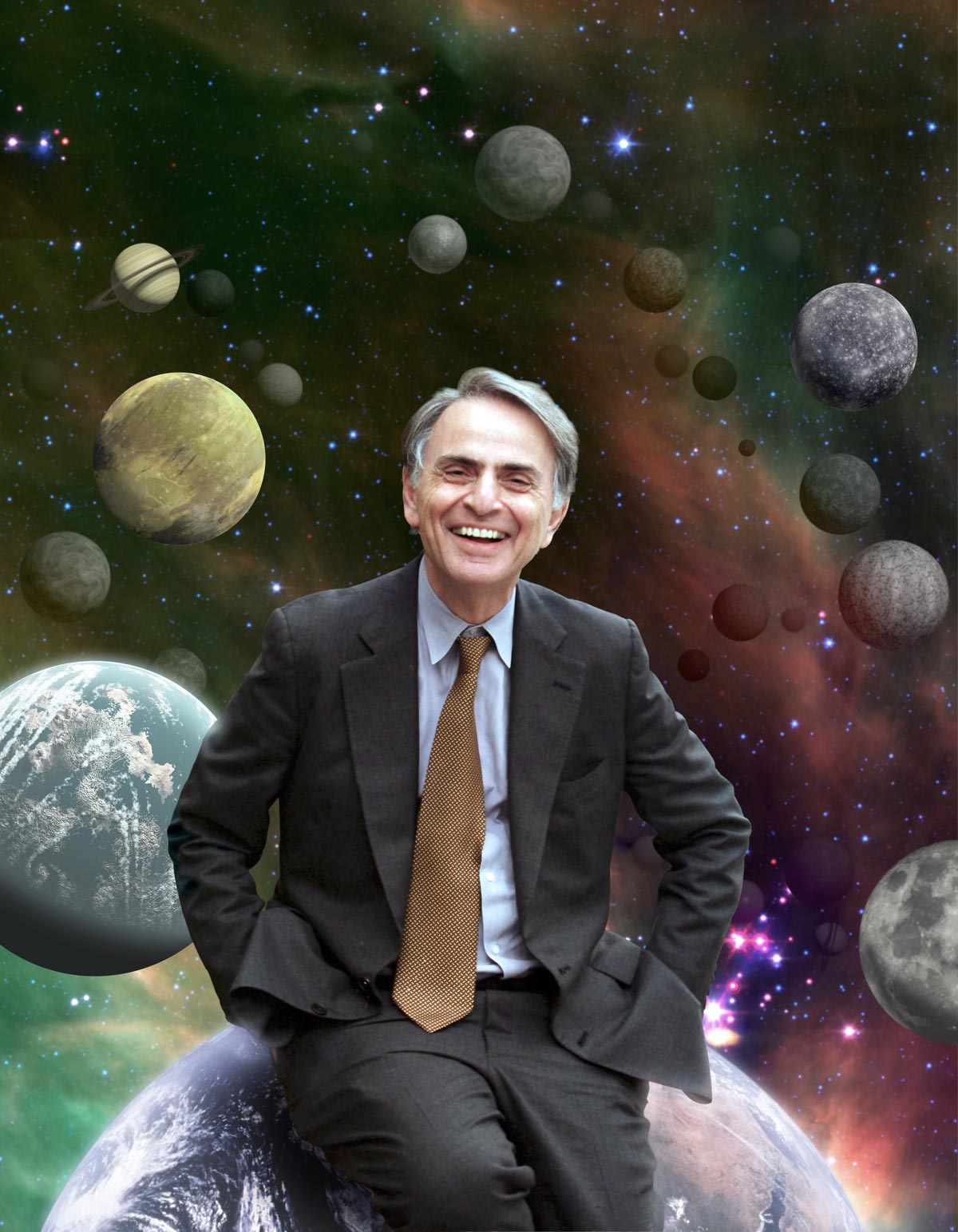 CARL SAGAN is meticulously selective in his choice wording when he says, “Science is more than a body of knowledge; it is a way of thinking.” Such an assumption is not only regarded as favorable by his contemporaries, they also concur when Sagan assures us that most individuals have “heard virtually nothing of modern science.” Much of mankind has “had a natural appetite for the wonders of the Universe. He wanted to know about science. It’s just that all the science had gotten filtered out before it reached him.” What mankind is left with—or rather, where he often begins and therefore ends, is with a set of superstitious beliefs which Sagan only seems to sigh regretfully when referring to. If it isn’t Science, it’s relegated to the compost pile of pseudoscience. Science, the institution of Science, cannot be built upon it.

Sagan says, “Pseudoscience is embraced, it might be argued, in exact proportion as real science is misunderstood—except that the language breaks down here. If you’ve never heard of science (to say nothing of how it works), you can hardly be aware you’re embracing pseudoscience. You’re simply thinking in one of the ways that humans always have. Religions are often the state-protected nurseries of pseudoscience—although there’s no reason why religions have to play that role.”

I can’t help but wonder what Sagan ultimately implies when he holds a promised dining reservation for the religious fellow at the table of Scientism, should he strictly adhere to its guidelines—or specifically, way of thinking, because the naughty-no-no list of pseudoscience is quite extensive. The very inclusion of angels, demons, prayer, prophecy, miracles, healing, creationism, and particularly in my case, FLAT EARTH, on that list disqualifies any participation in the Scientific Method by true Christianity. Even with the fat removed, one might argue, the atoning sacrifice, resurrection of Christ, and His ascension to heaven is bare bones Christianity. Without these historical events, we have no hope. For the scientific mind, these truths must be cast down in order to pursue a man-made standard of humanism which is “…based on experiment, on a willingness to challenge old dogma, on an openness to see the universe as it really is.”

If the Christian finds his identity among such phrases as, “In the beginning, God”—if he focuses the vision of his faith upon a God enthroned above the firmament (Ezekiel 1:26), one who has set His very thoughts and even His physical positioning so specifically upon us—we who are dwelling within the confines of His created order—that He employs the Earth alone as a footstool (Isaiah 66:1), then he would be hard pressed to engage with any counter-system of logic which would lean upon, and ultimately lead to, the institutions natural conclusions. Such obvious end-roads are presented when Sagan proudly lifts the dogmatic banner of Scientism and proclaims: “Who are we? We find that we live on an insignificant planet of a humdrum star lost in a galaxy tucked away in some forgotten corner of a universe in which there are far more galaxies than people.”

I am regularly accused by so-called Christians, almost always with their nostrils raised, that I am being “unscientific” in my beliefs, and therefore an embarrassment to their cause—as if my feelings are somehow supposed to be hurt by all the sticks and stones which academia can throw at me. Contrarily, they are accusations which suite me well. I always smile with a bit of relief and thank them for the observation, for they are indeed correct when acknowledging Science opposes the Bible at every perceivable twist and turn. A faithful adherent to the testimonies of Holy Scripture can at best by definition set his aspirations upon the practice of pseudoscience. By forcefully raping Holy Scripture with the STD’s of humanism, the Copernican and the Darwinist, both of whom infiltrate almost every conceivable rank and position of our church, uphold the only conflicting beliefs which are, by no mere coincidence, accepted by the halls of Scientism.

Sagan gleefully sweeps the three-fold horizons of the Darwinist, atheist, and Copernican when he dialogues as the spokesman for each of them. “To discover that the Universe is some 8 to 15 billion and not 6 to 12 thousand years old improves our appreciation of its sweep and grandeur; to entertain the notion that we are a particularly complex arrangement of atoms, and not some breath of divinity, at the very least enhances our respect for atoms; to discover, as now seems probable, that our planet is one of billions of other worlds in the Milky Way galaxy and that our galaxy is one of billions more, majestically expands the arena of what is possible; to find that our ancestors were also the ancestors of apes ties us to the rest of life and makes possible important—if occasionally rueful—reflections on human nature.”

Had Yeshua Hamashiach been a scientist rather than a carpenter, He would most certainly be a man of pseudoscience. Because He first and foremost upheld the written Words of Moses, psalmists, scribes and Prophets—being not of this world—He brought with Him a collection of beliefs or practices which “one might mistakenly regard as being based on scientific method.” As Sagan emphasizes by his own admission, Science takes the Lord’s place, “Because science carries us toward an understanding of how the world is, rather than how we would wish it to be, its findings may not in all cases be immediately comprehensible or satisfying.”

Rarely is a finger lifted by the Christian—if ever, which would dare investigate the claims of Science should it threaten or give the slightest hint as one containing the spirit of antichrist and which, as the Apostle John warned, “whereof ye have heard that is should come; and even now already is it in the world (1 John 4:3).” The Christian should understand and acknowledge that God alone is his source of knowledge. He, the Christian, first believes in God in order to define his own existence. From there and only in this plotted position can truth illuminate his method of thinking. He is to be a temple, an empty vessel always and only in need of God for filling. If the Christian and Sagan’s Science are to mutually agree, he must turn away from God’s Testimony and seek a counter-way of thinking, which will no doubt in turn fill him with counter-knowledge. The road to science, no matter how much the Christian flails his hands like a chicken attempting flight and demands it so, does not lead its faithful adherer back to God, so long as the Bible’s many declarations found in pseudoscience are stripped from him, and never will.

Actually, if Science has done its work on the soul, it will turn him into such a humanist that “absolute-certainty,” except the darkened perversities which he can accept and imagine in his own sinful mind, will be altogether dropped and abandoned from his own methodical approach. Again, Sagan declares, “Humans may crave absolute certainty; they may aspire to it; they may pretend, as partisans of certain religions do, to have attained it. But the history of science—by far the most successful claim to knowledge accessible to humans—teaches that the most we can hope for is successive improvement in our understanding, learning from our mistakes, an asymptotic approach to the Universe, but with the proviso that absolute certainty will always elude us.”

Sagan no doubt speaks for the religion of Mystery Babylon. He has dutifully filled himself with the spirit of antichrist—as has any Christian who upholds Science over the truth of Scripture; though at least Sagan is rigidly honest about it—when he critiques the fulfillment of past, present, and future Biblical prophecy. “Yet has there ever been a religion with the prophetic accuracy and reliability of science? There isn’t a religion on the planet that doesn’t long for a comparable ability—precise, and repeatedly demonstrated before committed skeptics—to foretell future events. No other human institution comes close.”

“The fact that so little of the findings of modern science,” Sagan concludes, “is prefigured in Scripture to my mind casts further doubt on its divine inspiration.”

Though Sagan, I can only imagine, being true to his own man-made religious worldviews—holding a total lack of certainty in all things—likely smirks as he adds, “But of course I might be wrong.”