I Do Not Believe in the 1893 Chicago World’s Fair

YOU WERE TOLD that the city of Chicago once held the World’s Colombian Exposition to publicly celebrate Columbus discovering America. The year was 1893, and the Great Economic Panic was already underway. Some 27-million people, a number equal to half of the entire United States population, arrived from all over the world to behold 200 newly erected buildings on 600 acres of reclaimed swamp, all of which had come to fruition within two years of its initial planning.

In as little as six months, Americans learned about moving sidewalks, phosphorescent lamps, Cracker Jack, Juicy Fruit gum, Quaker Oats, Cream of Wheat, shredded Wheat, the hamburger, and a suggestive belly-dance known as the hootchy-kootchy. The very first Ferris wheel, built by some guy named Ferris, made its worldwide premiere. One of the most visited exhibits involved Nikola Tesla and electricity. And because Buffalo Bill Cody was not invited but could not be outdone, he set up his Buffalo Bill’s Wild West Show just outside of the fair grounds. 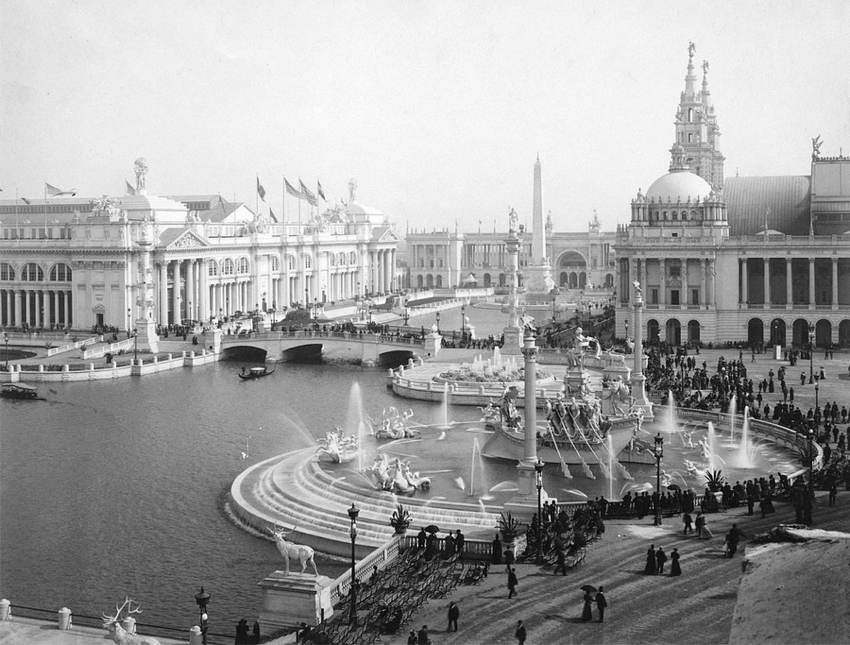 Numbered among its visitors was children’s author and Theosophist L. Frank Baum, who used the engineering marvel as inspiration for his own Emerald City to come.

But you probably already know this already. You’ve done your research. You’ve gazed back fondly at something which is advertised to be “a moment in time.” Perhaps you’re a closeted building hobbyist and its neoclassical architecture style drew your nostalgic gaze. Then again, maybe it’s useless party facts you’re after, so the next time someone is morally outraged at the mention of Mommy-and-Me pole dancing classes you can sarcastically quip that the person who first taught the hootchy-kootchy was a woman named Little Egypt. Or you’re just really into Ferris wheels. Try not to sigh so heavily as to fog up your computer screen when I tell you that I do not believe in the Chicago Worlds’ Fair of 1893.

It was a hoax.

The official story is that the great White City was built akin to a movie set. You know, don’t walk off stage or you’ll trip over a bucket and fall into the rafters. Facades were made not of stone, we are told, but a mixture of plaster, cement, and a jute fiber called staff, all of which was then painted white in order to give the Chicagoan Camelot its gleam. Apparently, 27-million people braved the frontier by boat, buggy, and train, and converged upon Chicago rather than New York, Paris, or Rome, in order to be wowed by a neoclassical city built of glue and popsicle sticks but was made to look like the real thing. We are expected to believe that developers and exhibitors spent two years building and millions upon millions of dollars investing in, which they would then turn around and destroy.

They furthermore tell us that plans were drawn to refinish the exteriors in marble after the fair was completed and the exhibitors had gone home on the Reading Railroad, but more importantly, that those plans were abandoned in July of 1894, when Chicagoans watched the city destroyed in a spellbinding fire.

There are absolutely no blue prints. Documentation is thin.

Except for a few rinky-dink shacks resembling put-put props, nobody built anything. 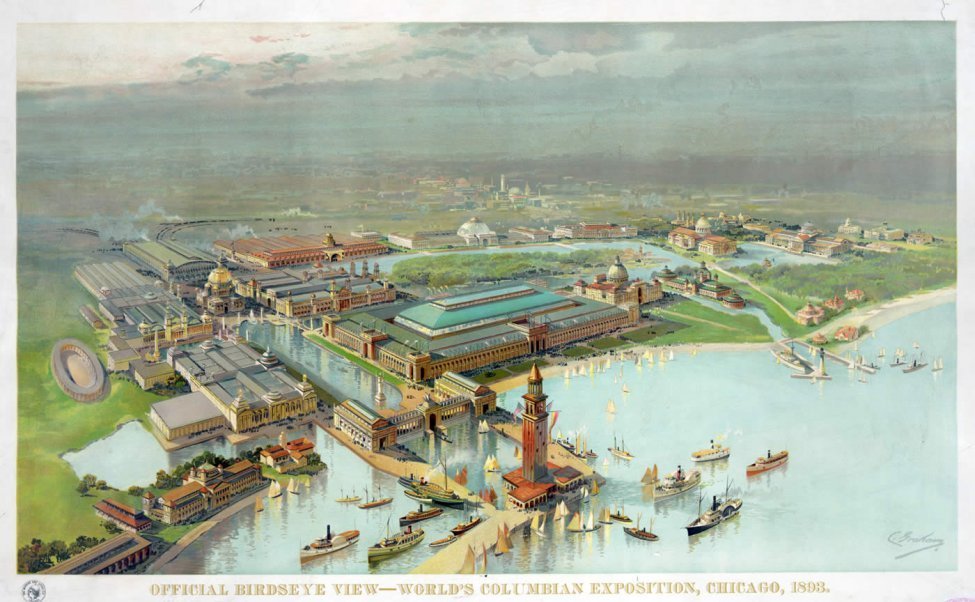 And we can right-away dispense with the Columbus myth. You were no doubt spoon fed the same syrupy cane-sugar tale of Columbus’ daring exploits in search of Indian trade routes as the rest of us. Priest and geographer Giovanni Botero recorded in his book, ‘Le Relationi Universali,’ first published in 1591, that the Vikings had arrived in the new world hundreds of years before the Spaniards ever thought to make the trip. The Vatican knew all about New Atlantis, and that’s just the tip of the ice berg. Knowing how the Elites managed to pull off the Columbian Exposition in 1893, twenty years after Mrs. O’Leary’s cow kicked a lamp over and sent Chicago up in smoke (more on her in moment), and yet still organize an event which secured the arrival of millions of people on the basis of shameless propaganda, should cause everyone to risk a kink in their neck for a better sideways glance. Both fires were orchestrated.

Of particular interest to the World Fair narrative is the legendary, mythical Camelot city of Chilaga, which continuously cropped up in early new world maps. It even made an appearance in Botero’s book, despite reports that the land itself had not been properly explored—according to the official narrative.

And then one day it simply disappeared from the map makers hand.

For whatever reason, the White City detailed Tartarian intricacies all over its Neo-classical facade.

Mm-hmm. There is a chance you clicked onto this article hoping I wouldn’t go there. Tartary. Tartaria—that great empire mentioned in antiquity, and which monopolized maps of Asia, but has since been scrubbed from existence. Try not to roll your eyes so heavily as to crack your skull when I quickly add, and then split from the scene like one of the Stooges, that I do not believe in the Bolshevik Revolution. At any rate, the fairground’s centerpiece was the so-called Statue of the Republic. In her left hand she held a symbol of freedom and revolution among the common people—the Phrygian cap. In her right hand, a griffin upon an orb.

The Statue of the Republic burnt to the ground.

It was all destroyed.

So, getting back to Mrs. O’Leary’s cow. Because I promised I would. Interesting indeed that the seal of the University of Chicago tells an oddly different tale. The griffin burning in the flames was not adopted until August 15, 1910.

If you’re finally cluing into what I’m proposing here, then you’re probably wondering: “But Noel, why in the world would they orchestrate and event that ushered in millions upon millions of people on horseback, and in only six months’ time, just to show them evidence of a Tartarian civilization, completely contrary to the Columbus drivel they were spoon-feeding them, and then completely destroy it?” 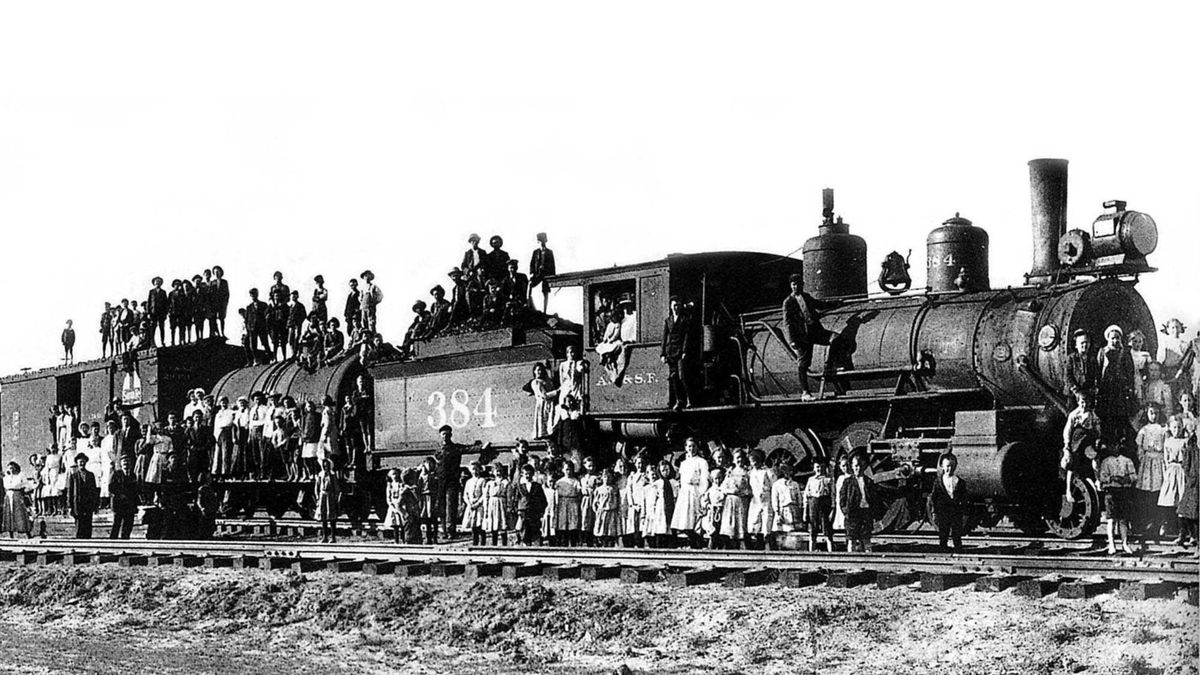 Whatever went down in the mid-eighteenth century; mud floods; human reset; probably has something to do with the Orphan Trains that brought hundreds-of-thousands of children from urban cities like New York out to the Midwest. If the Civil War was fought for nefarious purposes beyond what the Charleston Mercury or the New York Herald thought to report, and I should here warn you that I do not believe in the Civil War (just… take a deep breath) then Sherman’s march through Georgia, not overlooking Grant’s campaign on the Mississippi, were equally a success. And I’m willing to bet there was an entire generation of mud flood survivors that had a serious case of lost memory syndrome. Adults who gazed back upon their childhoods, and when pressed to the official mainstream narrative, was likewise plagued with conflicting memories.

The Chicago World’s Fair ended on October 28, just six months after opening and two days before the exposition was scheduled to close, when Chicago’s mayor, Carter Harrison Sr., was gunned down by an actor playing the part of a disgruntled and disfranchised voter, who apparently believed he was owed a political appointment by the mayor.  This—after John Schofield had declared the German Krupp artillery and guns on display, which had cost a million dollars to stage, “the greatest peacemakers in the world.” If the Chicago World Fair was in any way a precursor to the Disneyland and Walt Disney World resort theme parks, then it did not disappoint.

The Chicago World Fair doubled as a psychodrama.

The cow was framed.